Time To Step Up: Joe Burrow Needs To Own Everything About The Bengals 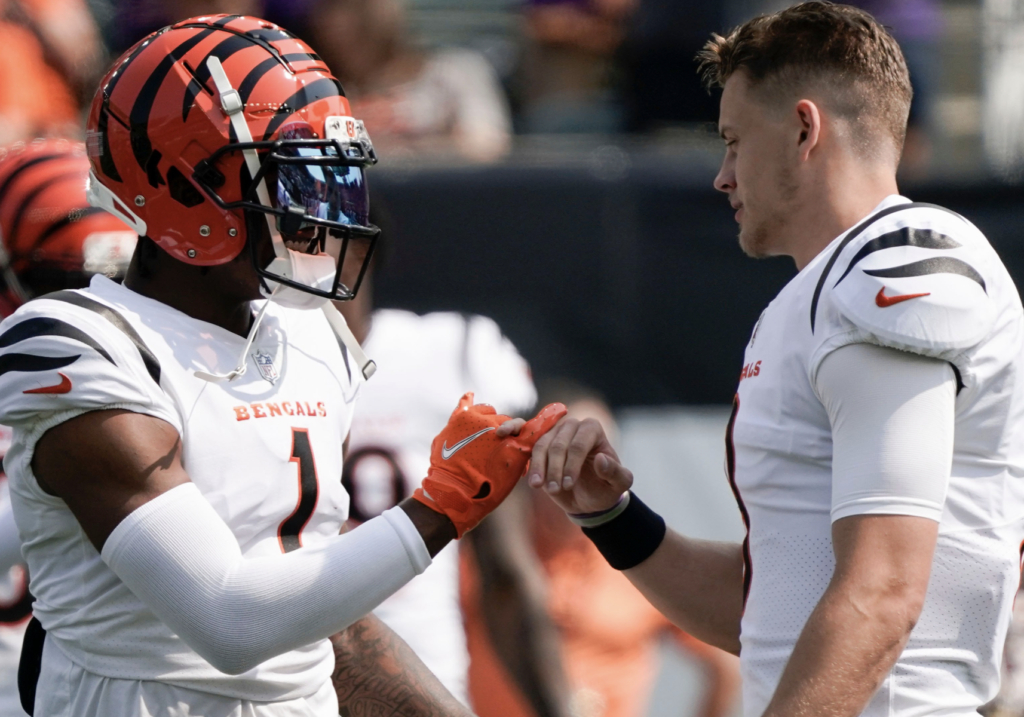 CINCINNATI – It’s time for Joe Burrow to take over.

He needs to get that across to everyone in the room as they prepare for playing the team that has toyed with the Bengals for far too long.

It’s Steeler Week No. 1 of 2021 but this week means a lot more to the Bengals quarterback, or at least should.

“It’s a division game. We’re excited to go there and play against them,” Burrow said in the moments following their 20-17 nose plant in Chicago. “They’re playing really well. Obviously one of the better teams in the league so we’ve got to put our big boys pants on and be ready to play.”

The second-year quarterback should be furious about what happened last week in Chicago. He was shaky. The offensive line was bad. And the results were putrid. He’s got an immediate shot at redemption against a defense that is probably licking its chops going up against the Bengals offensive line.

“I think those conversations could probably go on in the O-line room,” Burrow said. “For me personally, I control what I can control and try to get the ball out fast, read my keys and go from there.”

That might be what Burrow says publicly but it sure as heck can’t be what he’s thinking at this point.

Joe Burrow speaks with the media as the Bengals prepare for Week 3 against the Pittsburgh Steelers. https://t.co/DKSDwZ9kVi

And that chance for redemption comes in the hostile environs of Heinz Field where the hatred of the opponent will be much more intense than it was Sunday in Chicago.

Burrow spoke in camp about being more vocal and calling out the good and not-so good of the offense.

But what the Bengals need from their franchise player is much more than that. They need him to be a leader who takes over the team, for better or worse. Yes, the calls will still come in over the headset from Zac Taylor and Brian Callahan. There might be a little tension brewing between Burrow, Taylor and Callahan over which plays are getting called in which situations or how the quarterback is hanging onto the ball too long at times in the pocket.

Ultimately, what Taylor and Callahan think doesn’t matter if Burrow is making it all work on the field. When Burrow steps onto that field, it’s much more than input that he has. He owns everything about the offense. Period.

Ownership. Nope, we’re not talking Mike, Katie or Troy. Joe Burrow needs to own every single piece of the offense like it’s his baby. The great ones do. Super Bowl winners do. The offense isn’t just about the quarterback calling the plays and the offensive line and skills players prepping in their separate meeting rooms.

What we don’t see is how Burrow carries himself in the locker room after a game like Sunday. We don’t see if he’s calling out himself and his offensive unit for an utterly inexcusable effort against the Bears Sunday.

Yes, the Bears have a great defensive front. It’s also a defense that was handled 34-14 the week before in Los Angeles by Matthew Stafford and the Rams. Stafford was 20-of-26 for 321 yards and three touchdowns. Let me repeat: 20-of-26 for 321 and 3 TDs against the same defense that looked like the ’85 Bears on Sunday. Coming into 2021, I think it’s safe to say Burrow was considered a much more top-end QB than Stafford.

We’ve heard too much this week about the opponent, in this case the Bears, having a great defense and they get paid, too.

Bears defensive lineman Akiem Hicks said after the game that the Bears “imposed their will” on the Bengals. Well, that’s easy to say when you’re literally falling on the opposing team’s best receiver with your 325-pound frame, driving Tee Higgins’ left shoulder into the turf.

The Bengals need to start imposing their will. The defense has already shown they’re capable of that. They allowed just the touchdown on the opening drive of the game and two field goals that were courtesy the generosity of the turnover-ridden offense.

The first two games have not been good. They were bad in the first quarter and second half at home against Minnesota, getting rescued by their defense in overtime. They were worse against Chicago, unable to find any means to run the ball effectively. In both games, Burrow has had moments where he looked very sharp, finding Chase and Tyler Boyd on sideline routes in the first half against Minnesota to keep drives alive. He had a couple of effective passes over the middle to Tee Higgins and Boyd against the Bears.

But the Bengals need much more from Burrow than a couple of nice throws. They need their franchise QB to take over games. They need, with much improvement from the offensive line, Burrow to look confident in the pocket and start dissecting defenses with precision. You don’t need a John Elway or Carson Palmer cannon to do that.

Burrow left Ohio State because he wanted to show the college world what he was capable of, and LSU was the perfect landing spot with the perfect passing game coordinator in Joe Brady. Burrow, in his magical 2019 season, showed exactly what he could do, leading the Tigers to a national championship that included an epic 46-41 win at Alabama and rallying his team from 17-7 down against Clemson to the title in the national championship game.

That is ironic because that last name has been thrown around a lot in comparing Burrow to a certain quarterback with seven rings. With Tom Brady, he was (and still is) all smiles on the outside and toward the public-facing media but in games and behind closed doors, there was no fiercer individual.

Brady expected excellence of himself and others. The stories of him chiding teammates for not knowing details on certain plays are epic.

“If you were supposed to cut eight yards on an out to the sideline and you cut nine, he’d notice that and chew your ass out when you got back to the huddle or on the sideline. He’d just shake his head and say, ‘We need you. We need you to be better.’,” a Patriot receiver once told me. “He was in go-mode the entire time. You better not let your guard down or he’d rip you a new one.

“There was no let-up in him and that’s what took him to that next level. He was as fierce a competitor as I ever saw on the field. The expectation was you better be on his intensity level or not step on the field with him. Pure and simple.”

One other thing that Brady admitted this past offseason. He would often praise an opposing player that privately he would go after in a game. “Ninety percent of what I say is not what I’m thinking,” Brady quipped.

Burrow has shown early in his career, he can read his teammates as well as anyone. He obviously played with Ja’Marr Chase and was smart enough to not kick Chase when he was struggling with the drops in camp. He knew full well that Chase was drafted No. 5 overall for a reason.

Through two weeks, only Chase and Arizona’s Rondale Moore have four catches of at least 15 yards and Chase had touchdowns of 50 and 43 yards, making a great adjustment on a Burrow underthrow in the fourth quarter against Chicago.

Where Burrow needs to have a heart-to-heart, if he hasn’t already, is with his offensive line. Burrow’s been getting hit way too much. Anyone with working eyesight can see that. Whether or not the numbers are inflated – as Zac Taylor insists – is not the point at all. The point is, this offense with Burrow is going nowhere unless they find a solution to Burrow constantly throwing under duress.

Left tackle Jonah Williams told me this week that the O-Line’s issues are simply about consistency, or lack thereof.

Burrow would be well served to sit all of the groups down and have a heart-to-heart about where they envision themselves in Week 5, Week 10, Week 15. Sure, we all know the cliches about taking it a game at a time. But to hear from Burrow that if they don’t start getting their act together now, they’ll again be playing for draft position instead of playoff seeding late in the season.

And Burrow knows full well that any improvement in the offense starts with him. He’s got to be sharper, make better decisions pre-snap, call better pass protections, make more accurate throws. He’s got the game in his hands on every snap. He needs to show that he relishes this chance.