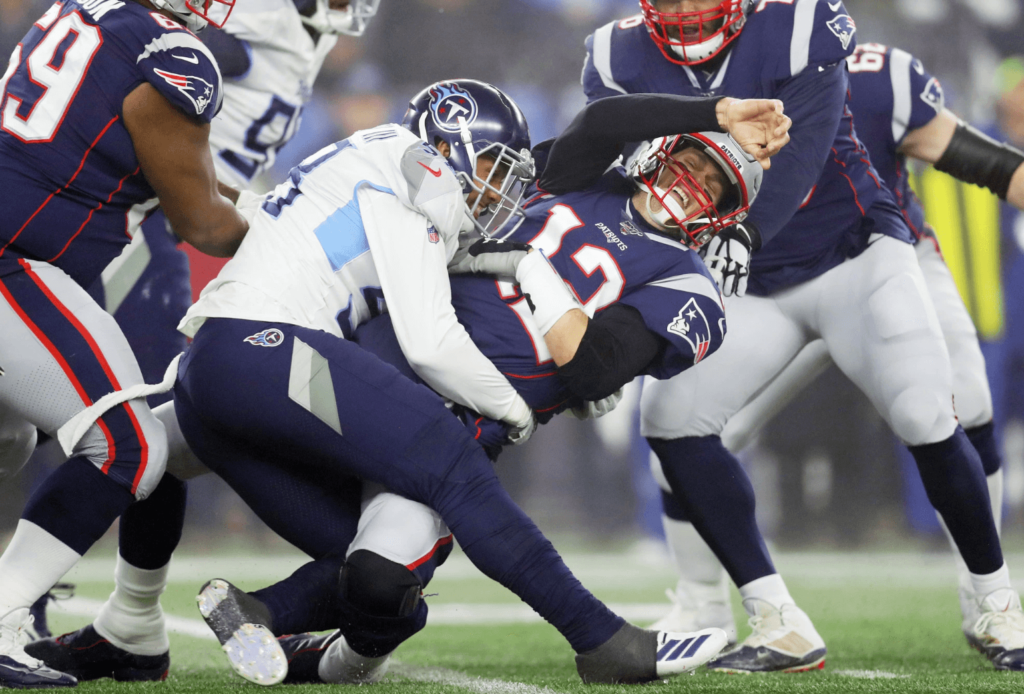 FOXBORO — In the end, the Patriots offense did what it’s done all season. It came up flat.

Derrick Henry ran for 182 yards on 34 carries and a touchdown and Tom Brady was held without a touchdown pass as the Titans beat the Patriots, 20-13, at a foggy Gillette Stadium. Logan Ryan picked off Brady with nine seconds left to seal the victory for Mike Vrabel’s Titans.

The Patriots will not appear in the AFC title game for the first time since 2010, also the last year they were one-and-done in the playoffs. The Titans advance to play the Baltimore Ravens next weekend.

The Patriots failure in the red zone at the end of the first half proved to be the difference.

The Titans won the opening toss and deferred, allowing Brady and the Patriots a first shot to put points on the board. Facing a third-and-10, Brady threw a dart to Ben Watson, with linebacker Jayon Brown in tight coverage. Watson somehow came down with the ball for 21 yards and a first down.

The Patriots drove to the Titans 18 before settling for a 36-yard Nick Folk field goal and a 3-0 lead.

Derrick Henry was as advertised on Tennessee’s answering drive. He carried the ball six times for 44 yards, gashing the Patriots for runs of eight, seven, nine and six yards. Patrick Chung injured his right ankle late in the drive and Tannehill picked on Terrence Brooks over the middle as the Titans quarterback hit tight end Anthony Firkser over the middle from 12 yards for a touchdown that put the Titans ahead, 7-3.

The Patriots offense responded immediately with a 10-play, 75-yard drive that featured a good blend of run and pass. Brady opened the drive by hitting Mohamed Sanu over the middle for 11 yards. Sony Michel ran it off left tackle for 25 yards and two plays later, it was Brady to Watson for 11 yards.

This time the Patriots wouldn’t settle for a field goal as Julian Edelman lined up on the left side and came in motion on the jet sweep, took the handoff from Brady and ran untouched for a five-yard touchdown on the first play of the second quarter for a 10-7 Patriots lead.

What a goal line stand by the @Titans ? pic.twitter.com/8GWBDKd1R9

Brady, sensing how critical the scoring chance was, called timeout before the second and third down snaps. After all that, the Patriots had to settle for another Folk field goal, from 21 yards, and it was 13-7.

Making that moment even worse was the answer from the Titans. With just two down linemen on the field on first down from their 25, Henry gashed the Patriots off right tackle for 29 yards. Henry ran the ball four straight times to the New England 23. On the next snap, he caught a screen pass from Tannehill for 22 yards down to the New England 1, where Jon Jones knocked him out of bounds. On the next play, Henry, who finished the first half with 106 yards on 14 carries, dove in for a 1-yard score with 35 seconds left in the half and a 14-13 Tennessee lead.

Tom Brady avoided disaster when his pass for Ben Watson went off the tight end’s hands and into the arms of former Patriot Logan Ryan. But Ryan dropped the ball on what would’ve been a likely pick-6.

Brady eventually moved the Patriots out to midfield but his Hail Mary at the end of the half fell incomplete in the end zone.

Henry ran the ball three times to open the second half for 14 yards. But Tannehill chose to pass on first down on the next series and nearly got sacked. His completion for no gain set up a punt and the Patriots got the ball back.

The Patriots looked to be in great shape when Brady hit a wide open Ben Watson for 38 yards to the Titans 25. But Shaq Mason was called for being illegally downfield. A 29-yard punt from Jake Bailey put the Titans at their 43.

After a pass interference call on Jon Jones, the Titans had the ball at the Patriots 43 but the defense stiffened, including a strip-sack from Kyle Van Noy, forcing another Tennessee punt to the Patriots 7.

Tannehill gave the Patriots an absolute gift to open the fourth quarter when he threw a duck off his back foot. Duron Harmon came out of nowhere to pick it off at the Patriots 40. But against the Patriots offense stalled at midfield after a defensive holding call gave them first and 10 at their 46.

The Patriots got the ball back at their 11 and following a 20-yard completion, they had the chance to move the ball with momentum. But Julian Edelman dropped an open pass on the left sideline and the Patriots eventually punted, giving the Titans the ball back with just over three minutes left.