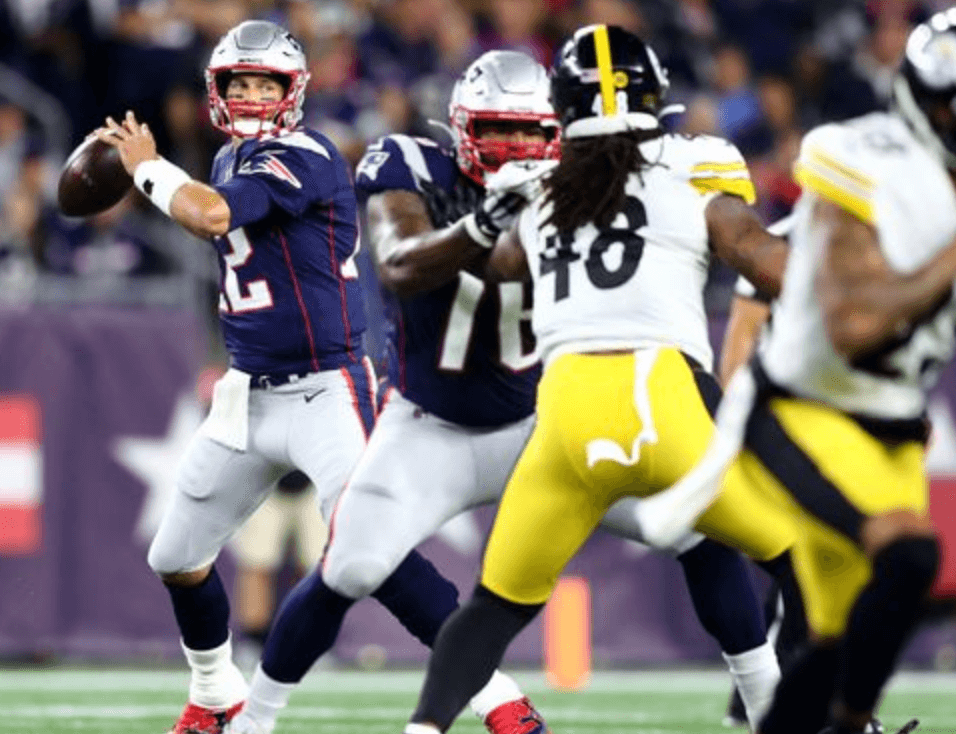 Josh Gordon and Phillip Dorsett caught first-half touchdown passes from Tom Brady and the Patriots defense was as good as advertised, limiting the Steelers to 87 yards in the first half in a 33-3 win over the Steelers on banner-raising night at Gillette Stadium.

Brady finished 24-of-36 for 341 yards, three touchdowns and Dorsett added a 58-yard touchdown reception in the third quarter as the Patriots avenged last season’s loss in Pittsburgh and improved to 5-1 in banner raising openers. Including the postseason, the Patriots are now 6-1 against the Steelers at Gillette dating back to the night in 2002 when the Patriots hoisted their first banner and opened Gillette Stadium. Tom Brady is now 6-0 against the Steelers all-time in Foxboro.

Brown, reportedly signed by the Patriots on Saturday just hours after he was released by the Raiders, was not eligible to play Sunday night since he was not on the Patriots roster by 4 p.m. Saturday. Demaryius Thomas was inactive and Kyle Van Noy missed the game to be with his wife giving birth.

From the moment that Godsmack performed the pre-game concert and the team unveiled Super Bowl banner No. 6, it was clear the Patriots were focused on beating a Pittsburgh team that beat them last year, 17-10, at Heinz Field. Unlike two years ago against Kansas City, there would be no banner letdown.

The Patriots opened in a very conservative package on their first possession, featuring Brandon Bolden, James White and Sony Michel in two-back sets. The conservative approach yielded only one first down before a punt. But it also set the Patriots up nicely to go with trickery and big passes on the second drive.

With a first-and-10 at their 48, Brady threw a backwards pass to Julian Edelman on the right sideline. Edelman then threw across the field to a wide open James White, who following a convoy down to the Steelers 20. On the next play, Brady hit a crossing Josh Gordon, who ran over Joe Haden and slipped out of his grasp at the 5-yard line and skipped into the end zone for New England’s first touchdown of the season.

The Patriots outgained the Steelers 140-41 in the first 12 minutes, establishing dominance at the line of scrimmage on both sides of the ball.

The Patriots appeared ready to add a second touchdown as they marched down the field to the Steelers 7 but Brady couldn’t connect with Gordon in the back of the end zone and the Patriots had to settle for a 25-yard field goal from Stephen Gostkowski early in the second quarter for a 10-0 lead.

The Patriots added to their lead on their next possession when Brady connected with Julian Edelman on back-to-back pass plays for 19 and 24 yards, putting the Patriots down to the Steelers 25. On the next snap, Brady threw a laser down the seam to Phillip Dorsett in the end zone for a 17-0 lead.

The Patriots defense continued to shine late in the second half when they stopped Pittsburgh on 4th-and-1 at the Patriots 47. Donte Moncrief dropped a pass from Ben Roethlisberger with Patrick Chung in coverage. The Patriots took advantage of that by driving down the field and settling for a 41-yard field goal from Gostkowski and a 20-0 halftime lead. The Patriots were out-gaining the Steelers, 275-87, at that point.

The Steelers showed a bit of life early in the third quarter when Ben Roethlisberger connected with James Washington for 45 yards to the Patriots 18. But facing 4th-and-1 again at the Patriots 1, the Steelers chose to go with a 19-yard field goal and the Chris Boswell kick made it 20-3.

But the Patriots responded immediately with another Brady-to-Dorsett connection, this one for 58 yards and good for Brady’s third touchdown of the night and the 520th of his career, tying him with Drew Brees for second-most in NFL history.

Devin McCourty put the perfect cap on the night with an interception of Roethlisberger in the end zone with four minutes remaining.

The only bit of concerning news was the loss of starting right tackle Marcus Cannon in the fourth quarter. He went down on the turf on a run play and was holding his left arm. He was down for several minutes before leaving the field under his own power. Jermaine Eluemunor came on at left guard and Joe Thuney moved to right tackle.

Next up for the Patriots, a date with last year’s defensive play-caller Brian Flores and the rebuilding Dolphins in Miami next Sunday. Like the Steelers Sunday night, the Patriots will look to avenge a December road loss from last season. This year, Flores’ Dolphins might need a bigger miracle than last season as Miami lost Flores’ debut as head coach Sunday at home, 59-10, to Baltimore.