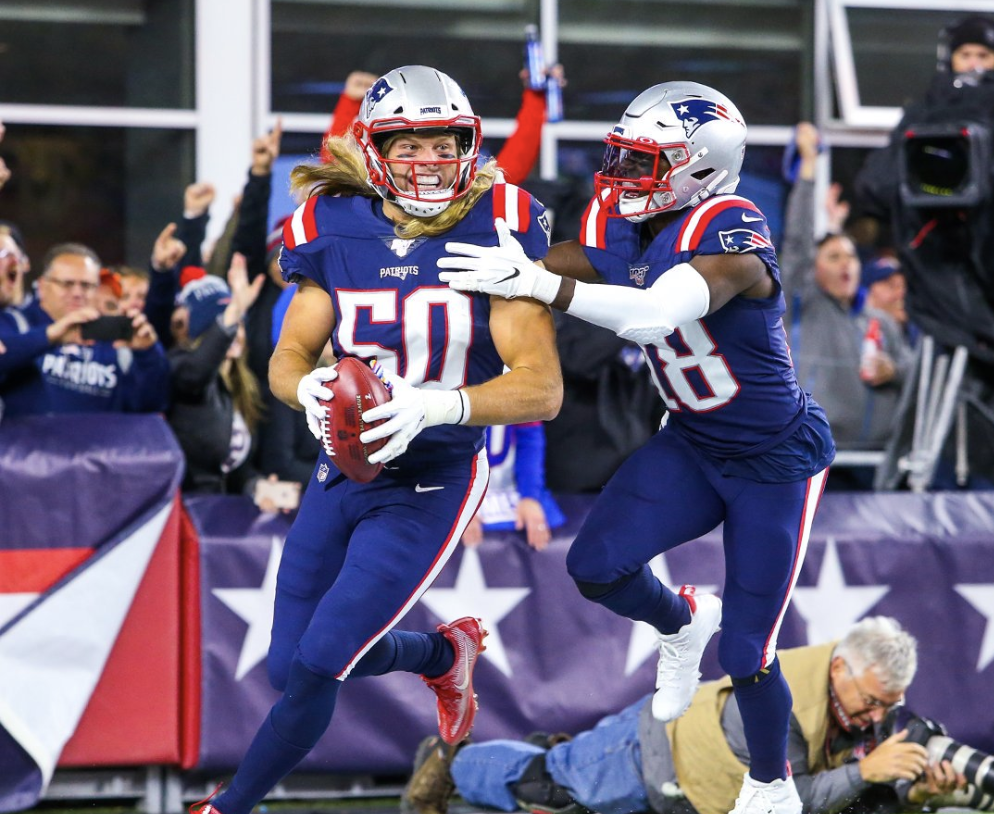 FOXBORO — The Patriots will not only need the extra time to savor Thursday’s 35-14 win over the Giants, they’ll need the rest for their bruised and banged up bodies.

The Patriots improved to 6-0 on the season thanks to a blocked punt return for a touchdown, a fumbled return for a score and an interception that set up Tom Brady on a short field. Brady had a pair of quarterback sneaks for touchdowns in the game that kept the Patriots perfect on the season. For a complete box, click here.

But the lingering story could be the injuries that piled up, keeping the Patriots staff busy raising the blue tent on the sideline. Josh Gordon (knee) and Patrick Chung (chest) were injured in the first half and did not return. Dont’a Hightower and Jakob Johnson suffered shoulder injuries in the second half and did not return. The tent was also used to examine the likes of Matt LaCosse, Matthew Slater and JC Jackson.

The Patriots picked off rookie Daniel Jones three times to run their season total to 14.

The two teams traded off 3-and-outs and a pair of wasted chances off interceptions for most of the first quarter. The Patriots managed just 83 yards of offense and the two teams combined for just five first downs and five punts.

But the fifth punt led directly to the first score of the game.

Brandon Bolden bull rushed up the middle and pushed Giants linebacker and punt protector Nate Stupar. Riley Dixon’s punt hit Stupar’s helmet and bounced right up in the air. Chase Winovich let the ball fall into his arms at the Giants 6 and ran into the end zone for the rookie’s first career touchdown.

John Simon – on a tip by Stephon Gilmore – picked off Daniel Jones. But that was followed on the next snap at the Giants 43 by a Tom Brady interception when he threw behind Julian Edelman. That interception by Janoris Jenkins was returned 62 yards to the Patriots 35. But a 15-yard unnecessary roughing call pushed the Giants back to midfield, where Daniel Jones and the Giants offense went 3-and-out.

The second touchdown of the night for the Patriots was set up by New England’s second interception of the half. Duron Harmon jumped a route and picked off Jones and returned it 27 yards to the Giants 20.

The key play was a Brady-to-Jakobi Meyers connection of 23 yards to the Giants 2. Brandon Bolden went in off left guard after a Brady sneak failed and it was 14-0 Patriots.

.@TomBrady sneaks for the @Patriots TD!

New England leads 21-14 before half. #GoPats

The game shifted dramatically when Jones connected with Golden Tate for 64 yards and a touchdown after Jonathan Jones fell down trying to knock down the pass. The Patriots got the ball back and on the third down play, Brady was sacked and stripped of the ball. Markus Golden scooped it up and rambled 42 yards for the game-tying score. Just before crossing the goal line, Josh Gordon attempted to drag Golden to the ground and had his left leg buckle underneath him.

He was down on the ground for several minutes before getting to his feet and slowly limping off under his own power. He was examined under the blue tent and then came out to jump on the stationary bike and do some squats. He did not return with a left knee injury.

The Patriots salvaged the first half with an 11-play, 75-yard drive, capped off by a Brady 1-yard sneak for the touchdown that put the Patriots up, 21-14 at the half. Halftime featured an emotional speech by recent Patriots Hall of Fame inductee Rodney Harrison.

The Giants opened the second half with a threatening drive but Stephon Gilmore, with the Patriots employing a Cover-2 look, picked off Jones on the left sideline at the Giants 18. The Patriots put together a drive but it stalled when Mike Nugent’s 40-yard attempt clanked off the left upright.

Jamie Collins forced a fumble on Jon Hilliman after a reception at the Giants 22. Kyle Van Noy scooped it up and raced 22 yards for the score, extending the final three yards for the pylon and the score that put the Patriots ahead, 28-14, with 8:33 left in the fourth.

The Patriots made it 35-14 on Brady’s second quarterback keeper, moments after Brady hit Edelman on a 36-yard diving catch to the Giants 3. The connection gave Brady his 91st career 300-yard game, third-most in NFL history and secured Edelman’s 13th career 100-yard game.

The Patriots return to action on Monday night, Oct. 21 against the Jets at MetLife Stadium.