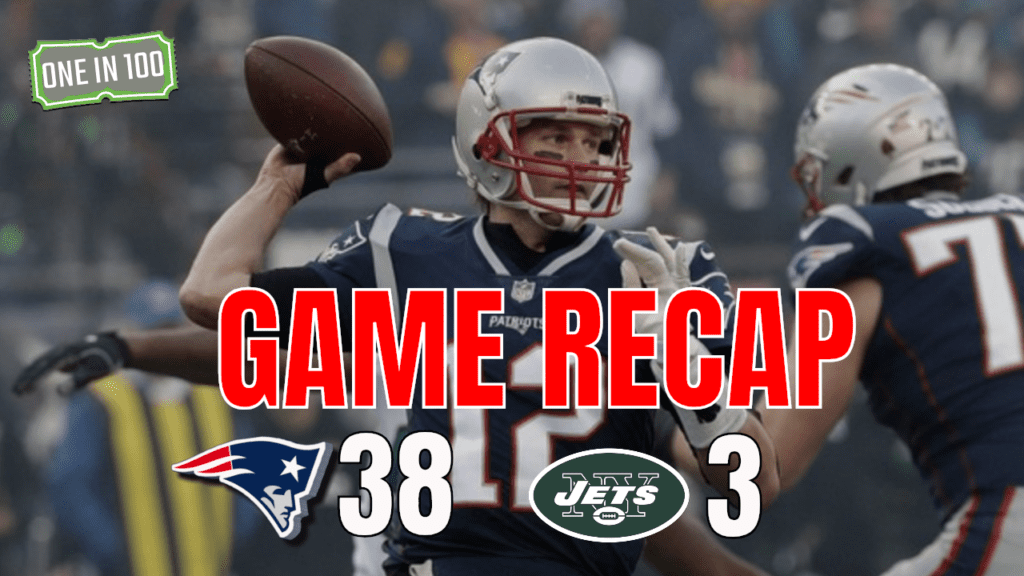 FOXBORO — Sunday’s result was a foregone conclusion, as was the Patriots wrapping up a first-round bye for the ninth straight season.

Tom Brady threw three first-half touchdowns and came out on fire while the Patriots overwhelmed rookie quarterback Sam Darnold in a 38-3 win over the Jets at Gillette Stadium. The Patriots finish the regular season at 11-5 and will have a week off to prepare for a home playoff game on the weekend of Jan. 12-13.

It’s the ninth consecutive season the Patriots have earned a first-round bye, extending their NFL record.

With the Jets again in utter turmoil to close a season, the Patriots were in position to take full advantage. Entering the game, the Jets were already without their top two receivers as Quincy Enunwa and Jermaine Kearse were ruled out on Friday. On defense, starting corner Morris Claiborne was ruled out earlier in the week. Then, on Sunday, reports surfaced that free agent acquisition Trumaine Johnson did not attend practice during the week and was benched for the game.

And, of course, on top of it all, reports came out Saturday that the Jets would be firing Todd Bowles as soon as the season ends.

Both teams went 3-and-out to open the game, with the Patriots accomplishing the mission of pinning rookie Sam Darnold deep in his own territory and forcing a quick punt that gave the Patriots the ball at their 41.

On the second drive, James White atoned for a drop on third down that would’ve kept the first drive going. With the ball at the Jets 17, Brady dumped it over the middle to White, who took it at the 15 and raced the rest of the way, capping the nine-play, 59-yard drive in five minutes.

Brady look much sharper Sunday from the outset. His throws both to outside the numbers and over the middle had zip and accuracy and his mechanics in the pocket looked sure and confident. He completed a pass in the seam to Rob Gronkowski for 14 yards to the Jets 17. On the next play, Brady checked down perfectly to James White on a dump-off over the middle and White raced 17 yards for the first score of the game and a 7-0 lead.

The seven points put the Patriots over 400 points for the season, extending their NFL record to 12 consecutive seasons.

The Jets would respond on the next drive with a 10-play drive covering 56 yards that featured a Sam Darnold open-field scramble for 28 yards to the Patriots 33. Jason Myers connected from 40 yards and the lead was cut to 7-3 with 54 seconds left in the first quarter.

Brady responded by continuing his exceptional first half. Facing 2nd and 10 at his own 25, Brady fired a bullet over the middle on a well-covered Julian Edelman for 18 yards and a first down. That was followed by another 18-yard strike to Edelman to the Jets 38. To cap off the drive to open the second quarter, Brady dropped a perfect dime to Rex Burkhead for 18 yards and a 14-3 lead.

On the first play of the ensuing drive, Elijah McGuire fumbled on a tackle by Trey Flowers and Devin McCourty picked it up and returned it to the Jets 6. But a holding call pushed the Patriots back. Then it appeared the Jets would force a field goal.

But defensive lineman Henry Anderson was called for bumping into Brady and shoving him to the turf on third-and-18. Given new life, Brady scrambled to his right on 3rd-and-9 from the 9 and fired a perfect strike to Phillip Dorsett in the back of the end zone for a 21-3 lead.

Defensively, the Patriots stopped the Jets on 4th-and-3 from the Patriots 5, Darnold was flushed out of the pocket and his pass for Robby Anderson in the back of the end zone was broken up by Stephon Gilmore. The secondary played very well in the half and held Darnold to 7-of-13 passing for 81 yards. The half ended with Derek Rivers’ first career sack.

The Patriots made it 28-3 when Trey Flowers and Adam Butler got pressure in the pocket and forced Darnold to fumble the ball. Butler was credited with the forced fumble before Kyle Van Noy scooped up the loose ball and raced 46 yards for the score that made it 28-3 with 10:48 left in the third quarter.

The only bad news for the Patriots came just before the score as Malcom Brown made a tackle on running back Trenton Cannon around the left end. Brown collided with Devin McCourty, who was also in on the tackle. McCourty left with a head injury and was placed in concussion protocol and did not return. Also injured on the play was Dont’a Hightower, who limped off the field but returned in time for Van Noy’s score.

Brady fired his fourth touchdown of the day to Julian Edelman with 3:26 remaining in the game to cap off his day.