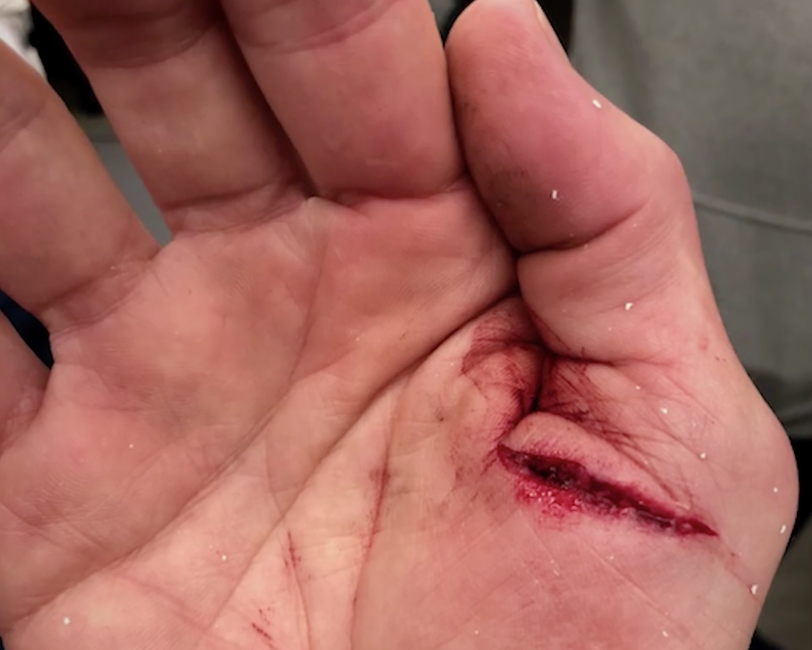 Turns out Tom Brady was playing the AFC Championship with a significant injury to his right. Grotesque as a matter of fact.

In the finale of the docu-series Tom vs. Time on Facebook, the Patriots quarterback reveals the graphic nature of the cut to his right hand below his thumb that required 12 stitches to close.

Brady injured the thumb on Wednesday, Jan. 17, just four days before the AFC Championship against Jacksonville when he tore it open in practice on an exchange at the line of scrimmage with a teammate.

“When I hurt my thumb I thought, ‘This is it.’ This is the way the season ends. I’m looking down at my thumb as it’s split open and thinking, ‘I really don’t know what happened to my thumb.’ But I know it doesn’t feel good and I’m having a real hard time believing I’m going to go out and play well against the No. 1 ranked defense in the league in four days.”

The documentary then shows trainer Alex Guerrero using acupuncture treatment around the thumb to promote stimulation and healing following the stitching of the wound.

Another telling moment came at the end of the show when wife Gisele acknowledges the end of his career and when that might happen.

“These last two years have been very challenging for him in so many ways,” she said. “He tells me, ‘I love it so much, and I just want to go to work and feel appreciated and have fun.'”

Brady acknowledged on Good Morning America on Monday that Gisele and his kids will have a direct impact on how and when he decides to walk away from the game he loves so much.

“This offseason is going to be about my family,” Brady said. “They deserve it. There is more to think about than just me. I think that’s what you commit to when you have a family. They commit a lot to me. That obviously goes both ways.”