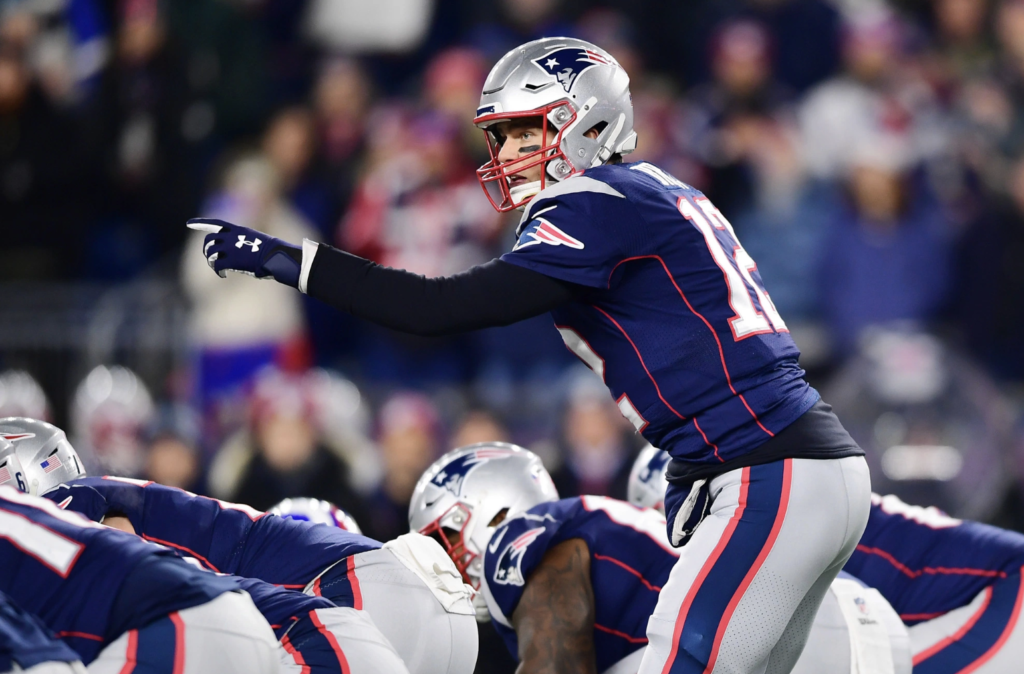 FOXBORO — Go ahead and doubt Tom Brady. But do so at your own peril.

Brady missed just seven of his 33 pass attempts Saturday, threw for 271 yards, completed a touchdown to a tight end and engineered a 17-play scoring drive that started from his 1-yard line.

He led the Patriots to a 24-17 AFC East-clinching win over the would-be upstart Buffalo Bills at a delirious Gillette Stadium. Eleven straight divisional titles and all with No. 12 at the helm. But the bigger takeaway from Saturday: This Tom Brady can indeed lead the Patriots to a seventh Super Bowl title.

“He was on the money, he was sharp,” Bill Belichick told me. “Again, that’s what we need from everybody this time of year. We’ve got to play like this every week, or our season is going to end quickly. We all know that, and nobody knows it better than he does. He prepares and works as hard, or harder than anybody to make sure that he’s at his best, and he certainly was today. Good day today.”

This is a quarterback trying to maintain a level of excellence never seen before in the sport. The signs of aging this season have been accelerated, perhaps, by a lack of established weapons around him. Saturday, though, definitely felt different from the start.

One look at Brady from the opening snap Saturday afternoon and you could tell he was as focused as he’s been all year. The 42-year-old played like he had a point to prove but what was even more telling is that he had support from his entire offense.

“In a good offense, everyone has to be able to produce,” Brady said. “And if you can get both tight ends involved, and all the receivers involved and all the backs involved, it’s hard to defend. So, we just did a good job of that today. You’ve got to make them defend everybody, and a lot of guys came up big. It was a big game for us. We needed it, and happy to come from behind in the fourth and win.”

When the Patriots went down 17-13 in the third quarter and Julian Edelman was being evaluated in concussion protocol, there was doubt. Earlier this season there was legitimate doubt about whether this offense had the consistency to drive for a go-ahead score.

Brady hesitated just a bit on a third-down scramble in the fourth quarter and it led to the Patriots settling for a 20-yard Nick Folk field goal, as the Patriots still trailed 17-16. That one bit of hesitation seemed to be a metaphor for the hesitancy Brady and Patriots fans had about this offense the entire season.

Then the Patriots defense stepped up, putting that 53-yard John Brown touchdown behind them and tightening the screws on Josh Allen. They forced a three-and-out, leading to another chance for Brady and the offense to take the lead with 9:01 left.

Brady put together a seven-play, 59-yard drive also included a run by the quarterback but this time it was a keeper that extended the drive at the Buffalo 2 and gave the Patriots first and goal.

Rex Burkhead, who fumbled after catching a Brady pass in the first quarter, redeemed himself in the best possible way, breaking a tackle and keeping his balance of the right side for a 1-yard TD. Julian Edelman caught the 2-point conversion and Patriots had a 24-17 lead with 5:06 left.

That’s the Brady message to the rest of this 2019 team that some have amazingly counted out because their offense is the weakness of the team.

Brady came out and completed his first eight passes for 78 yards and threw a perfect touch pass to Matt LaCosse for the 539th touchdown of his career to his 76th different touchdown target.

But Brady also had 143 yards of rushing offense on the day, led by Sony Michel’s 96 on 21 carries.

“I think it was more balanced than we’ve been, and we ran the ball good and effectively against a really good defense,” Brady said. “So, that’s always good. I think one game doesn’t always necessarily lead to the next, so I think you just have to keep building week-to-week on some things that maybe we did good that worked out, and the things that didn’t, you kind of move on from them.

“But, we knew that it was going to be a tough test. We got the ball and – I think we lost the turnover battle, I don’t think they turned it over – and we lost one and then missed the fourth-down opportunity before half. So, hate to have those things happen, but glad we overcame it.”

Brady has now won an unfathomable 16 consecutive AFC East titles, with the only asterisk being Matt Cassel’s relief outing in the 2008 season opener and the rest of that season after Brady tore his ACL.

Saturday was a perfect snapshot of what the Patriots have been about under Bill Belichick and Tom Brady. It hasn’t always been perfect, and it hasn’t always been pretty. But it has been, in the end, clutch, winning football. For 11 straight years, good enough to win the AFC East.

“I think it’s pretty cool. It’s pretty cool,” Brady added. “It’s hard to do, and it’s a lot of effort, a lot of hard work, and a lot of people are just putting – day-after-day, just coming in, and sitting in these chairs and trying to do what’s right for the team. So, it’s a great reward. It’s a great step for us, and it’s great to control the ability to that, too. So, to win and know that you win the division is pretty cool. So, happy for us, happy for our team, and our coaches, and our families and our fans. And hopefully we can build on it and go play great next week.”

So, if you’re foolish enough to doubt 42-year-old Tom Brady and the Patriots, go ahead. Throw dirt on the grave. But don’t be surprised when he jumps out of the casket and authors a game-winning drive. Just ask the Kansas City Chiefs about the AFC Championship game last January at Arrowhead.