Lazar’s Patriots Top 50 Big Board: the Top Ten Targets in the 2019 Draft 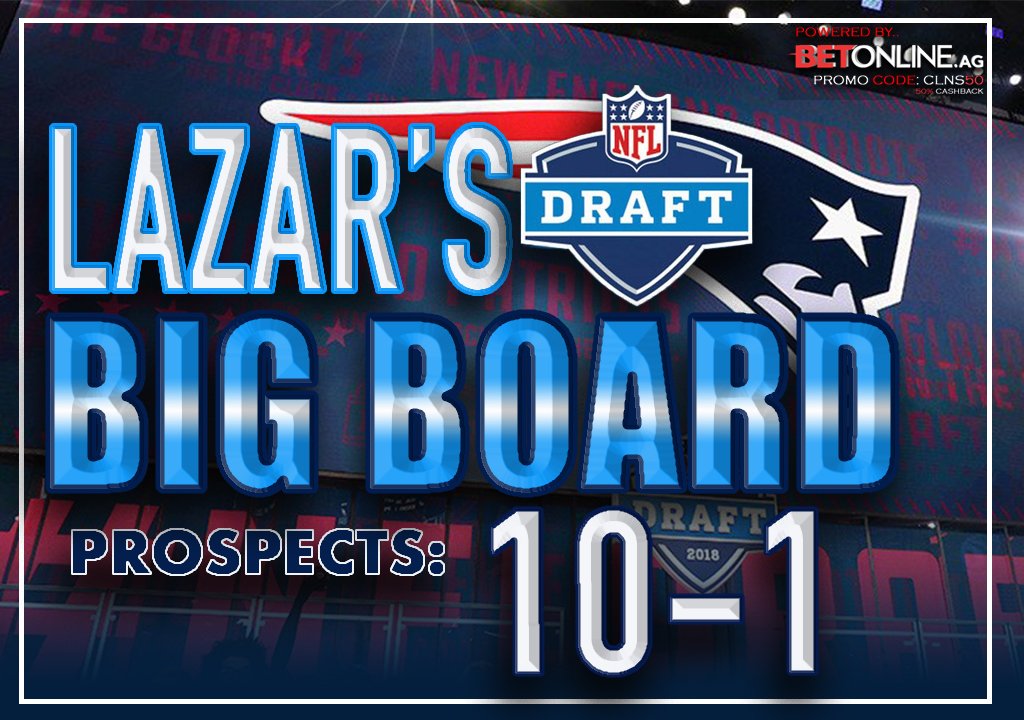 Here are my top ten targets for the Patriots in the 2019 NFL Draft:

The brother of Falcons wide receiver Calvin Ridley, the Georgia product is one of the best route runners in this class. Ridley is terrific at the top of his routes with a variety of different moves at full speed with the ability to accelerate through his breaks to create separation. Although he ran a limited route tree, he has the necessary football IQ to read coverages and adjust accordingly. Ridley is also a hands catcher that attacks the football in the air and has tremendous body control along the sideline. A disappointing combine performance knocked Ridley down the board, but he’s my WR6 due to his dynamic route running, which will allow him to separate at the next level despite a below-average athletic profile.

The pick by many for the Patriots at 32, the Alabama tight end has the all-around game that the Patriots typically like at the position. As a receiver, Smith made huge strides last season refining his routes to pair with excellent long speed (4.63 40-yard dash). Smith uses that speed to crowd defensive backs in his breaks and then snap his routes off to create separation and passing windows. He’ll change gears within his patterns to accelerate out of his breaks and has above-average YAC skills with terrific vision and elusiveness for a tight end. Smith is also one of the best in-line blockers in the class with fantastic footwork to drive blocks and upper body strength to finish, and he moved around the formation as a weapon in the running game. Although his tape is first-round worthy, it would be a bit unprecedented for an undersized tight end with a below-average athletic profile to go in the first round. The Patriots could trade back into the second round and still land him if history repeats itself with Smith.

Samuel is my top target for the Patriots at wide receiver. The South Carolina product is thickly built and quick enough to handle slot duties but has the versatility to move around the formation. As a ball carrier, Samuel is built and runs like a running back with excellent contact balance and field vision to create after the catch. He runs crisp routes with sound footwork, fakes out of his breaks and aggressive hand usage to battle defensive backs in the contact window. In 30 career games at South Carolina, Samuel had 17 red zone touchdowns due to a unique blend of quickness and a stout frame. There’s a bit of an injury history with Samuel that includes a fractured fibula in 2017, but they were isolated incidents that shouldn’t linger.

Lawrence makes a lot of sense for the Patriots at the end of the first round. He projects perfectly as a run-stuffing defensive tackle in New England’s system, which is a significant role in their defense compared to some of the lighter defenses we see in the NFL nowadays. Lawrence might be a two-down player at the next level, but his immense power and size to control the line of scrimmage in the running game are dominant traits; he’s the most physically imposing player in this class. Lawrence did flash some pass-rushing skills with 6.5 sacks in his freshman season, but he’s a pocket pusher that only had 3.5 sacks over his final two seasons with the Tigers. If he reaches his peak, though, Lawrence could be the next Vince Wilfork in New England.

Tillery is my dream pick for the Patriots in the first round out of the players that could realistically fall within their range. Tillery’s 12.5 career sacks at Notre Dame don’t look great, but he was always in the backfield. Tillery tallied 48 quarterback pressures a year ago, third-most among interior defenders in this class, and tied potential number one pick Quinnen Williams with the top pass-rushing grade for defensive tackles, according to Pro Football Focus. He’s got a great build and enough athleticism for the position, but where Tillery separates himself is with his technique and hand usage. His strikes are heavy, and he consistently gets inside hand positioning while adhering to “hands above eyes” rules to create leverage. Tillery then finishes with above-average flexibility to turn tight corners once he gets offensive linemen on their heels with his power. Against the run, Tillery needs to play with better pad level, but his length and power translate nicely into a two-gapping system. In the Patriots’ system, Tillery would move all around the defensive front and can do most of the things that Trey Flowers did for them last season.

Fant has the highest upside as a receiver among the tight ends based on the film, and he backed that up by testing in the 98th percentile in Indy. One of two Iowa tight ends, Fant is a mismatch as soon as he steps off the bus with wide receiver skills with the body of a tight end. Fant will move all around the formation as teams look to use him as a matchup nightmare, and he’s got elite jump-ball skills and speed to run by defensive backs. He’s got some sharpening to do as a route runner, however, as his footwork needs to improve in his breaks to translate that athleticism into separation on horizontal cuts. There are also some concerns about drops and Fant’s approach to the ball, but he does make some tough catches with strong hands and a large catch radius. As a blocker, Fant did have some issues with leveraging and holding up against power, but he isn’t a bad blocker and did his job for the most part. He gets labeled a weak blocker mostly because teammate T.J. Hockenson starred as an inline blocker at Iowa. If the Patriots luck into Fant in the first round, it’ll go a long way to replacing Rob Gronkowski.

Before you turn on the tape, Wilkins stands out as a Patriots target due to his character. A permanent team captain for the last two seasons, Wilkins was a locker room leader and has “face of the franchise” qualities. On the field, Wilkins has an all-around game that will likely lead to him coming off the board quickly. You’ll be hard pressed to find reps where Wilkins isn’t the lower man or winning the hand fighting war, and he’s got a unique slithering style with tremendous short-area quickness and first-step explosiveness to slip blocks on the interior. The Clemson coaching staff moved Wilkins all over the defensive line, and his motor is off the charts. My only hesitation with Wilkins is that he isn’t a great fit in a two-gapping system, but he’ll find success in any system, and he already embodies the Patriot way.

A year ago, Ferrell was in top ten conversations, and despite an 11.5-sack season with 20 tackles for loss, he has slid down boards, but not mine. Ferrell is my ninth overall player in this class due to his production, sound fundamentals and hand technique that all make him a perfect fit in the Patriots’ system. Ferrell has a series of stabs and swipes that stun offensive tackles to help him create separation to turn the corner or set the edge against the run. He also processes things quickly to key on blocking schemes and alters his plan based on how tackles set against him. Ferrell doesn’t win with a great first step or flexibility to turn the corner, but he’s got a skill set that the Patriots covet for their edge defenders.

Simmons comes with a lot of red flags, but he’s a top ten talent on the field. The Mississippi State product tore his ACL in February training for the combine and assaulted a woman in 2016, although he has turned his life around based on reports. Simmons’ combination of first-step explosiveness and power is truly unique, and he began to use his hands and play with proper pad level last season to complete his game. The Mississippi State coaching staff put Simmons at nose tackle for long stretches last season which hurt his production, but he’ll thrive in more of a three-technique role in the NFL. Simmons can get off course when he tries to blow up offensive linemen rather than find the ball, but there are very few flaws in his game, which on the field, resembles five-time Pro Bowler Ndamukong Suh. The Patriots might stash Simmons on the roster as he recovers from ACL surgery knowing that he could be the best player from this draft class.

A pipe dream for the Patriots at this point, Hockenson is the best tight end I’ve scouted over the last three draft classes. Lost in teammate Noah Fant’s workout was a terrific performance from Hockenson at the combine with good scores across the board landing in the 85th percentile. Hockenson’s explosiveness off the line of scrimmage creates instant separation on a vertical plane, and he understands how to alter his routes based on the coverage. He’s also very detail oriented at the top of his routes crowding defensive backs before accelerating into his horizontal cuts, showing rare route running nuance for a tight end. Hockenson was such a nightmare in man coverage that opposing defenses dedicated multiple defenders to him at times, and he’s also a weapon after the catch. Plus, he’s arguably the best inline blocker in this class with tremendous hip flexibility to get underneath blocks and leg drive to push defenders off the ball. Iowa moved him around the formation in the running game where he had an expanded role as a blocker. Finding flaws in Hockenson’s game is difficult.