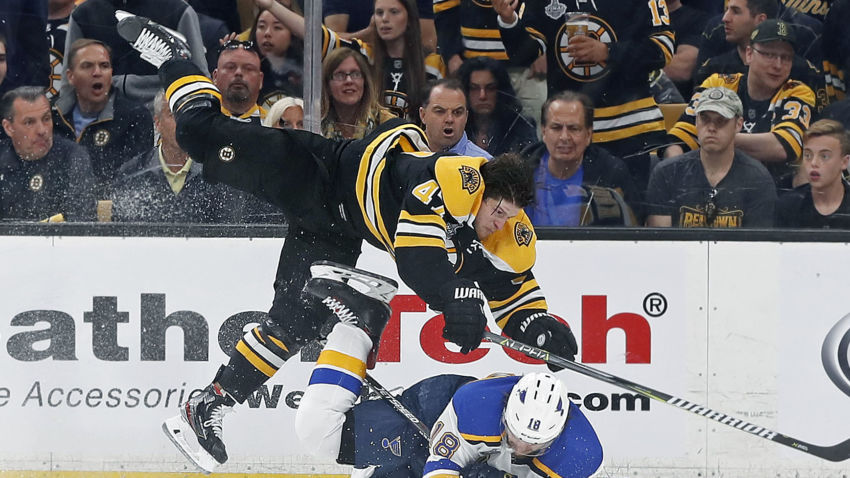 5-27-19: Boston, MA: The Bruins Torey Krug goes airborne, losing his helmet in the process as he lays out the Blues Robert Thomas in the third period. The Boston Bruins hosted the St. Louis Blues in Game One of the Stanley Cup Finals playoff series at TD Garden. (Jim Davis /Globe Staff). T
Share
Facebook Twitter Email

It became increasingly likely over the past year that the 2019-20 season would be Torey Krug’s last in Boston.

No one expected the unrestricted free agent to choose the St. Louis Blues.

On Friday night, Elliotte Friedman reported that Krug and the Blues came to an agreement on a seven-year, $45.5 million deal ($6.5 AAV).

The Bruins had reportedly offered Krug a six-year, $6.5 million deal, but, according to Friedman, took it off the table.

Don Sweeney’s free agency press conference was scheduled for 5 pm EST on Friday, but was pushed back to Saturday at 1 pm, leading Friedman to speculate the Bruins were involved in something big.

Krug’s career in Boston will certainly be looked back at fondly by Bruins fans. His seven full seasons saw him put up 335 points. That, along with his power play quarterbacking abilities, cemented him as one of the best offensive defensemen in hockey. He burst onto the scene during the 2013 second-round series with the Rangers when he put up four goals in five games.

The Bruins now have roughly $14.8 million in cap space. It should certainly be interesting to see what they do with that money.