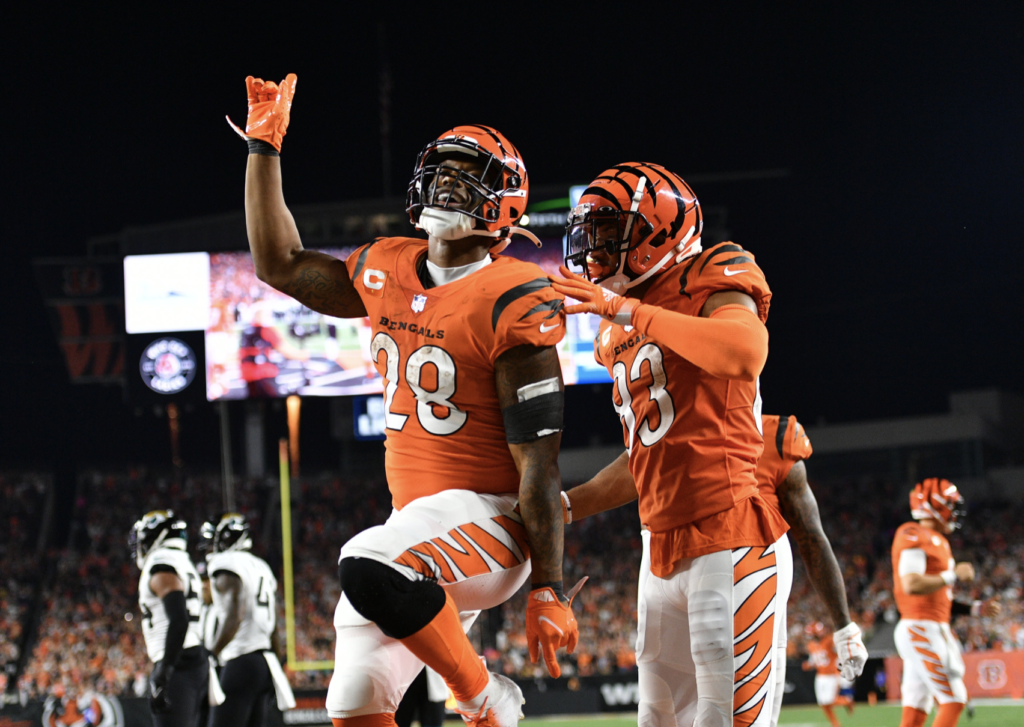 CINCINNATI — Evan McPherson connected from 35-yards at the gun to lead the Bengals to a 24-21 win over the Jacksonville Jaguars Thursday night before 63,198 at Paul Brown Stadium. The Bengals erased a 14-0 halftime deficit to improve to 3-1 on the season. The final score was Cincinnati’s only lead of the game.

Joe Burrow completed 25-of-38 passes for 348 yards and two touchdowns with no interceptions. Trevor Lawrence was 17-of-24 for 204 yards with one touchdown run.

C.J. Uzomah made several huge plays in the second half comeback, including a paid of touchdowns that helped the Bengals tie the game, 14-14, and 21-21.

But Uzomah’s biggest play came on the final drive. With Joe Burrow spotting the Jaguars in a zero blitz with man-to-man coverage on the outside, Uzomah stopped his route at the line of scrimmage, read Burrow’s call and caught the pass from Burrow. he then split through the screen for 25 yards down to the Jacksonville 21.

“I’ll be honest, I had to (do a) double take on that one,” Uzomah said. “Tyler Boyd was looking at me, too, like ‘What did he just call?’ It was Cover Zero and we knew going in that (Jaguars defensive coordinator Joe Cullen) was coming in from the Ravens and that’s what they like to do — run Cover Zero in critical situations — and Joey Franchise is just back there dealing dots out there knowing and understanding what the defense is doing. He called that play up and just made something happen. Boyd had a huge block on that one, Trenton (Irwin) came out and had a big block. (Burrow) gave me a wink after I caught it and I was like ‘This guy here, he’s reckless!’”

“You guys have heard me talking about having the playbook in the back of my head and seeing looks that I can take advantage of,” Burrow said. “That just comes with experience. They gave me a ‘zero’ look, and so all week I knew the defensive coordinator had a Baltimore background. They showed some ‘zero’ on film — I knew I’d have to be ready for it in a big spot. I had C.J. out there — that’s not exactly the personnel we usually throw those jailbreak screens to — but he really took advantage of the opportunity. I had those plays in the back of my head expecting ‘zero,’ and I just got to it and didn’t really think about it.”

In the first half, Jacksonville, a team that had lost 18 straight games looked like the hungrier and better prepared team.

James Robinson ran around and then through the Bengals defense, while Trevor Lawrence, with seven interceptions in the first three games, managed the game smoothly without any mistakes. Robinson and Lawrence capped drives of 67 and 80 yards to build Jacksonville’s lead to 14-0.

The inaugural class of the Bengals Ring of Honor. pic.twitter.com/VIDQgxcoX0

The Jags were inches away on fourth down from making it 21-0 with less than a minute left in the half when Logan Wilson stopped Lawrence just inches shy of the goal line.

“It was the turning point of the game,” Bengals coach Zac Taylor said. “It was about to be 21-0 right before the half. That is a tough hole to dig out of. We believe we could do it, but you certainly don’t want that going into halftime and them getting the momentum. It felt like the momentum came back in our favor.

“Our defense finally got the chance to rest because the offense was leaving them out there. They had 15 first downs right out the gate and the defense was gassed with a short week — that all factors into it for both teams. We hung them out to dry on offense, so that was huge for them to bow up and stop it. Our entire red zone defense has been tremendous through the first four games. That’s big. Keeping points off the board is critical.”

After a no-show of a first-half that inspired boos from the Paul Brown Stadium crowd that expected much more from its hometown team, the Bengals finally showed up in the second half. They received the ball and drove 69 yards in four plays, needing only 1:48 to finally get on the board. Joe Burrow lofted a perfect ball down the left sideline for Ja’Marr Chase for 44 yards. Two plays later, Burrow executed a perfect play-action rollout to the left, finding C.J. Uzomah for 22 yards and a touchdown.

The Bengals forced a punt and Burrow again drove the team efficiently down the field. Joe Mixon capped a 12-play, 86-yard drive with a one-yard run after Joe Burrow’s TD run was overturned by replay.

Jacksonville responded with Robinson’s second TD run, a four-yard scamper that capped an 11-play drive. The killer for the Bengals was a defensive holding on Vonn Bell that wiped out a Trey Hendrickson sack.

Burrow led the Bengals right back, as Burrow scrambled on third down, finding C.J. Uzomah underneath. Uzomah ran down the left sideline for a 31-yard score that tied the game with 8:59 left

The Bengals were able to contain Trevor Lawrence on third-and-2 at midfield, forcing the Jaguars to punt to the Bengals with 5:33 remaining in the fourth.

“I knew we were going to score,” Uzomah said.

ALL TIED UP (with a nice #BudLightCelly BTW)

The Bengals could not find a way to run the ball against the stout Jacksonville front in the first half.

Evan McPherson finally missed a field goal in an NFL game. The rookie kicker yanked a kick from 43 yards wide left on Cincinnati’s first possession. That set the tone for a first half in which everything looked off key.

The Jaguars came in with a plan to attack the Bengals defense on the perimeter. They executed it to perfection at the start. It started to spread the Bengals’ front. James Robinson then made two runs of over 10 yards up the middle.

Trevor Lawrence also showed the athleticism that made him the best overall quarterback in the 2021 draft and the No. 1 overall pick. He had four rushes for 24 yards.

Joe Mixon suffered an ankle injury that Zac Taylor indicated was “minor” after the game but had no further information as to a timeline.