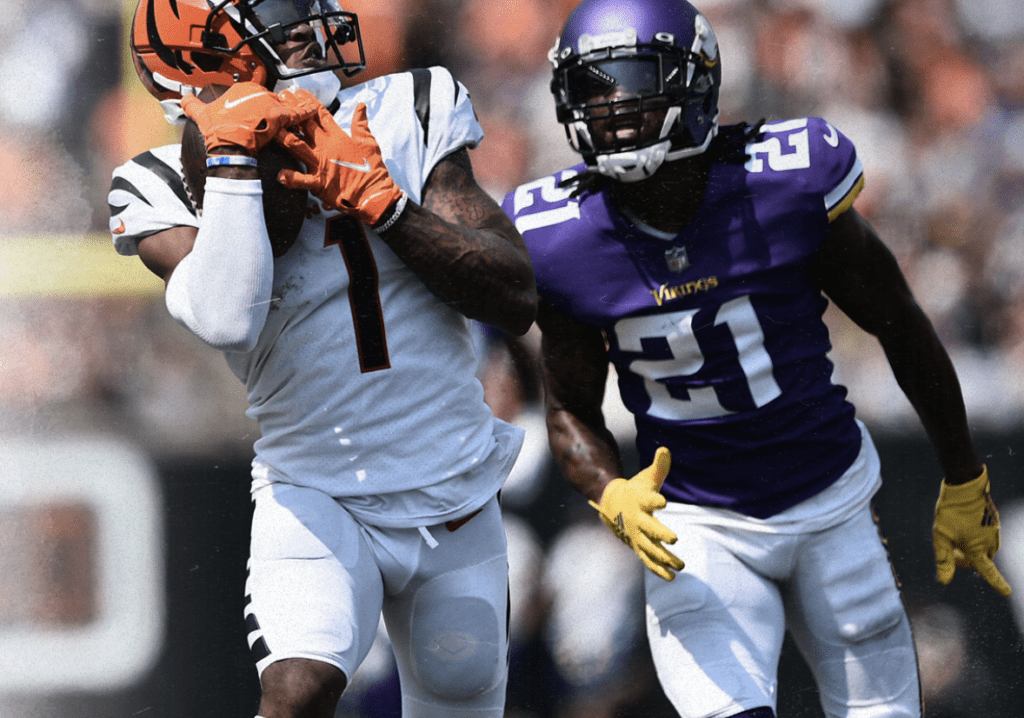 CINCINNATI – Last year, the Bengals lost the opener at home because their kicker pulled a calf. This year their rookie kicker didn’t leave a shred of doubt.

Evan McPherson connected from 33 yards out as time expired in overtime as the Bengals escaped with a 27-24 win over the Vikings Sunday at Paul Brown Stadium.

Germaine Pratt forced and recovered a Dalvin Cook fumble at the Bengals 39 with 1:48 left in overtime to set the Bengals up for the game-winning drive. Instead of running the ball, Joe Burrow lofted a perfect pass to C.J. Uzomah for 32 yards on 4th and 1 to keep the drive alive.

“In that situation, in all honesty, some of the times I want this ball to hurry up and get down,” Uzomah said. “But in that situation, it’s perfect because of what I’m doing, because of the way I’m running the route, having time to track it. So, Joe threw it perfectly for me to be able to track it and make something happen and get down the field. That was a beautiful ball. He was dropping dimes today. That was just another one.”

How did Uzomah characterize Burrow’s decision to throw the ball 30 yards when only an inch was needed?

“Ballsy. That’s the trust. I’ve gotta say it,” Uzomah said. “That’s some big cahonas there by him. Again, fortunately we practiced that one because usually it goes a lot shorter than 30 and then we just (move) the sticks. But again, that’s the trust he has in us and Joe has in me to lob it us and have me go get it.”

McPherson, the rookie fifth-round pick out of Florida, was awarded the game ball for his game-winning kick. His teammates carried him off the field for the first time in his life.

“That’s funny, because that actually was my first walk-off field goal,” McPherson said. “It’s super exciting, and I’m glad I got to do it for this team. They’ve worked so hard for this game. And I think all of us want to succeed this season and make the playoffs and make a run for the Super Bowl and this is where that started. So I’m super happy that I could, I guess, give the team what we wanted, and that’s a win.”

Ja’Marr Chase caught five passes in seven targets for 101 yards, including a 50-yard touchdown late in the second quarter and the defensive front had an active game as the Bengals built their two-possession lead before 56,525.

After missing wide left but having it nullified by a Bengals timeout, Joseph connected from 53 yards on a game-tying field goal as time expired to force overtime.

In his first game back from ACL surgery, Joe Burrow was 20-of-27 for 261 yards and two touchdowns.

“You guys asked me early in the week how important the first game was and I kind of shrugged it off,” Burrow admitted. “But the first game is really important. You need momentum early in the season to gain more and more momentum. It just keeps snowballing. Now, we’ve felt this. We’ve felt giving up a big lead, coming back, winning the game, making big plays when they count. I think it’s going to serve us well going forward.”

The win was Zac Taylor’s first in the month of September in three seasons as head coach, improving to 1-6-1 over that time.

“It’s huge,” Uzomah said. “That’s the thing we talked about a little bit this week. Coach Pitch (QB coach Dan Pitcher) said, ‘I could throw this stat up from last year. I could throw what they did from last year as well.’ We’re not that team. They’re a different team. The teams we’re going up against this year are different teams as well. So, this is a new team, a new locker room, a new culture we’re building in there, that we’re buying into. It’s always a good thing to notch that first one under your belt. We’re just going to feed off of that, build off of that brick by brick to get to where we want to be.”

The players, to a man, were most happy for their embattled head coach, who gambled on fourth down and lost at his own 30 before a fourth-down conversion set up the winning field goal.

“He’s very fearless,” Joe Mixon said of Taylor. “At the end of the day what moves us as players is he actually wants to go for things like that. I thought it was definitely a gutsy call. Zac he even out there doing whatever he can to put us in great position. Joe Burrow made a play, CJ made plays and I thought it was a hell of a play when they connected at the end in overtime. Them boys been fighting hard. They was clawing scratching whatever we can to deliver and that’s what happened.”

“You know with Zac you can just tell how bad he wants it. The last few years he dealt with a lot of things. On the field, off the field, lot of distractions and whatnot. You can just tell, look him in his eyes he mean what he say when he want to win and how he wants things to go. To be honest, everybody in this locker room especially the new guys we brought in that are free agents and draft picks everybody are all bought in. That’s been one thing I think we prided ourselves on was everybody buying in. It shows. Offense we complemented the defense well. Defense did the same thing. Everybody doing their job. It was a great victory. Special teams did a hell of a job as well. It was great complementary football today. And I’m just glad we got the dub.”

The GOOD:
The Bengals defensive front was as advertised. Led by D.J. Reader and Larry Ogunjobi, and some push from B.J. Hill, the Bengals had pressure on Cousins all day.

Joe Mixon was a beast: Mixon was also as advertised. Mixon ran 27 times for 121 yards and a touchdown.

Ja’Marr Chase was money. Five catches on seven targets, 101 yards and a 50-yard TD. Chase ran strong routes and showed strong hands in making catches in traffic and only the sideline. Of course, he also ran under a Burrow rainbow for his first career TD.

.@Real10jayy__ saw that ball and took it to the HOUSE.

Joe Burrow looked sharp in building a 21-7 lead. The Bengals executed three scoring drives of 75 yards. Burrow hit a wide open Tee Higgins in the back of the end zone on fourth-and-goal to tie the game. He threw a beauty to Chase on a sideline route on third down and to Chase again over the middle on third down.

The crowd was a factor: The Vikings were their own worst enemy, committing three false starts and a hold on their opening drive of the game. The crowd noise and involvement that Zac Taylor begged for paid dividends as the crowd was active from the start. The crowd remained loud throughout, a big boost for the Stripes.

The BAD:
Eli Apple: Filling in for Trae Waynes, Eli Apple had a terrible series that led to Minnesota’s first points. The Bengals corner on his fourth team failed on third-and-24 to push K.J. Osborn out of bounds on a 25-yard play. Then, with the Bengals sacking Kirk Cousins back at the 25, Apple was called for defensive holding in the end zone. On the next play, Cousins found Adam Thielen in the corner of the end zone to cap a 10-play, 91-yard drive that consumed 8:21 of the second quarter clock.

Zac Taylor’s 4th-and-1 call: Leading 21-7 midway through the third quarter, the Bengals had momentum and could’ve punted from their own 30 after a 15-yard completion to Chase. But Taylor gambled and Joe Mixon slipped one yard short. The Vikings converted their fourth-and-4 with a Cousins second TD pass of the day to Adam Thielen of 25 yards.

The secondary was burned in the second half. The Vikings converted three fourth downs in the fourth quarter to extend drives, including twice to Adam Thielen.

Joe Burrow looked out of sorts late: Burrow missed Ja’Marr Chase and didn’t appear as fluid in the second half until his clutch throw to Uzomah late in overtime. Burrow took a hit to the shoulder and had his ankle rolled up on late but stayed in the game an insisted that neither injury is a big deal.