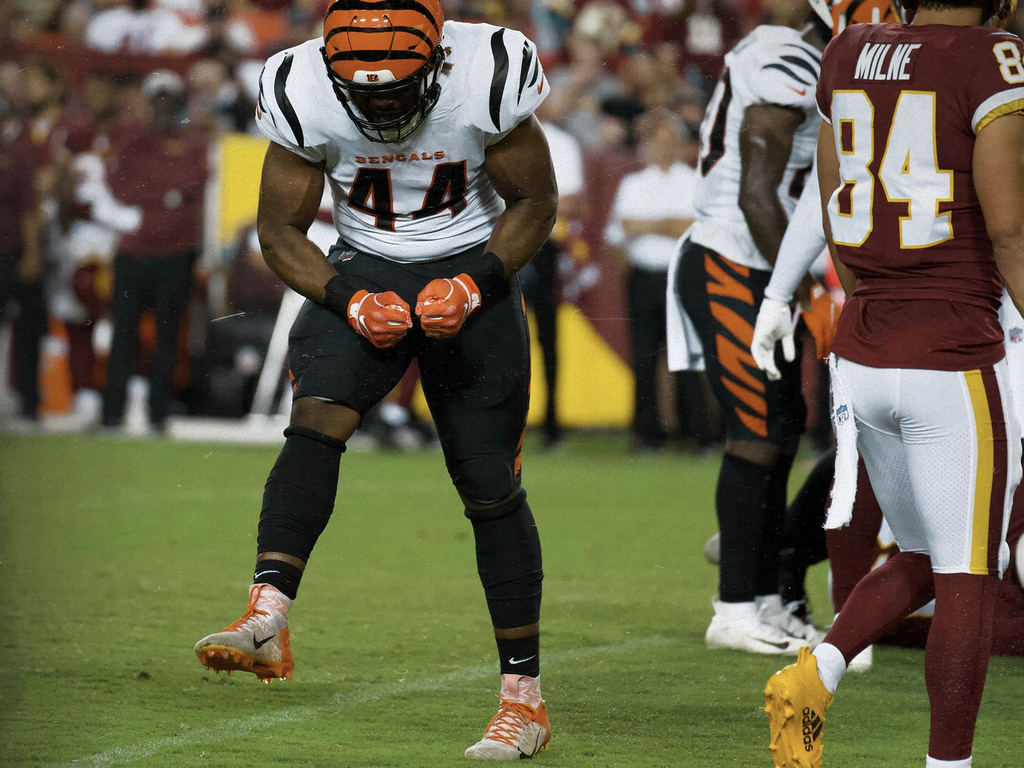 Jaret Patterson’s one-yard plunge early in the fourth quarter gave Washington the lead for good and the Washington Football Team held on for a 17-13 win over the Bengals Friday night at FedEx Field in Landover, Maryland.

The Bengals defense was impressive but the offense struggled, with three quarterbacks – Brandon Allen, Kyle Shurmur and Eric Dungey combining to score just one touchdown, a one-yard QB sneak by Allen on the first drive of the second half.

The Bengals sustained another injury to a standout rookie edge rush with Cam Sample leaving in the second half with a right shoulder injury. He did not return, though after the game head coach Zac Taylor sounded an optimistic tone, characterizing the injury as “relatively minor.” The Bengals lost rookie Joseph Ossai last week to a right wrist injury. He did not play Friday.

The Bengals finish the preseason with a game against the Miami Dolphins at Paul Brown Stadium next Sunday, Aug. 29 at 4 p.m.

Joe Burrow has pushed to make his first game action in the preseason finale since his ACL tear last Nov. 22 in Washington.

Reasons to feel good:
Stout D:
Defense, going up against the WFT first offensive line group, handled things in the trenches. They pressured Ryan Fitzpatrick twice in the opening drive. May be a nit-pick but, as stout as the first team interior run D is, run fits on the edge still need work. WFT gashed Bengals for 10+ yards three times in the first half.

Evan McPherson:
The rookie kicker out of Florida continues to show why the Bengals spent a fifth-round pick on him. He booted a 50-yard field goal in the fourth quarter that drew the Bengals within four points. He hit a 37-yarder in the first quarter and then perfectly executed directional kick on the ensuing kickoff, allowing the cover team to swarm the carrier at the 20. It appears McPherson on the final 53 is all but a formality. Probably was the case early in camp but Friday night pretty much seals it.

No doubt about it! @McPherson_Evan FROM 5️⃣0️⃣

Tasty Turnovers:
Logan Wilson forced a fumble in the first quarter, leading to a 37-yard Evan McPherson field goal. The takeaway was the only reason the Bengals were on the board in the first half. Darius Phillips nearly forced another but the ball caught by Markus Bailey was ruled to have hit the ground, allowing WFT to take a 6-3 halftime lead.

Hodge Podge:
Darius Hodge, college free agent out of Marshall, filled in for the injured Joseph Ossai and made the most of his opportunity. He had four pressures in the first half and got to Fitzpatrick for a sack and a hurry that nearly led to an interception. He and Jalen Davis continue to make cases for backend roster spots, though Hodge is looking more than just another back-up edge.

Chido wins
Chidobe Awuzie looked like the No. 1 corner he was brought in to be, stride for stride with the speedy Terry McLaurin on a go route to the end zone. Awuzie is going to be a huge part of what Lou Anarumo wants to do when it comes to more bump-and-run coverage this season. Winston Rose also made a nice play in the end zone at the end of the first half, pushing the receiver in air just enough to land him out of bounds and save the Bengals four points at the end of the first half. Rose did get beat on a two-point conversation in the fourth quarter, following Washington’s go-ahead TD.

Auden Tate was a monster:
Tate caught a pair of passes in heavy coverage, showing off glue-like hands. He was targeted twice and caught both for 23 yards, including this one down the left sideline. Tee Higgins also made a great catch in traffic in the first quarter. But Tate has made the biggest impression so far at receiver in camp and the preseason.

Reasons to worry:
There is no sugarcoating this. The play up front must be better, specifically more physical, than what we’ve seen from the first unit in the first two preseason games. The real reason Joe Burrow may have been held out of the first two games is they don’t want to risk things with a backup center and a rotation of right guards playing in the preseason. Offensive line making too many mental and physical mistakes. The unnecessary hold by Quinton Spain wiped out a 17-yard gain on a swing pass to Joe Mixon on the first drive. A false start by Riley Reiff. The first team OLine did not move bodies up front on several run plays. The second team looked much better in this regard. They will be buoyed by what appears to be a drastically improved and dynamic defense. All they need to do is play complementary football and not kill their defense with countless three-and-outs. When you don’t you have the ball just over nine minutes in the first half and allow the other team 20 minutes of possession in the first half. All of this contributed to a woeful 0-for-6 on third down.

Ja’Marr Chase is going to put up big numbers in his rookie season if he’s healthy. He’s an elite receiver because of his ability to separate at the top of his routes and his breakaway speed. So, let’s not get super panicky about this. BUT Chase is showing rookie yips right now, dropping a pair of passes in the first quarter and short arming another on a crossing route. This, on top of his two clear drops on Wednesday in practice and some drops over the first two weeks of camp. Bill Belichick encouraged Julian Edelman to take the ball everywhere early in his career with the Patriots when he suffered from the drops. The same approach couldn’t hurt Chase.

Brandon Allen:
The backup quarterback missed a switch wheel read to Trent Taylor down the right sideline that likely would’ve been six in the bank. He also missed a wide open Trenton Irwin on a sideline route.