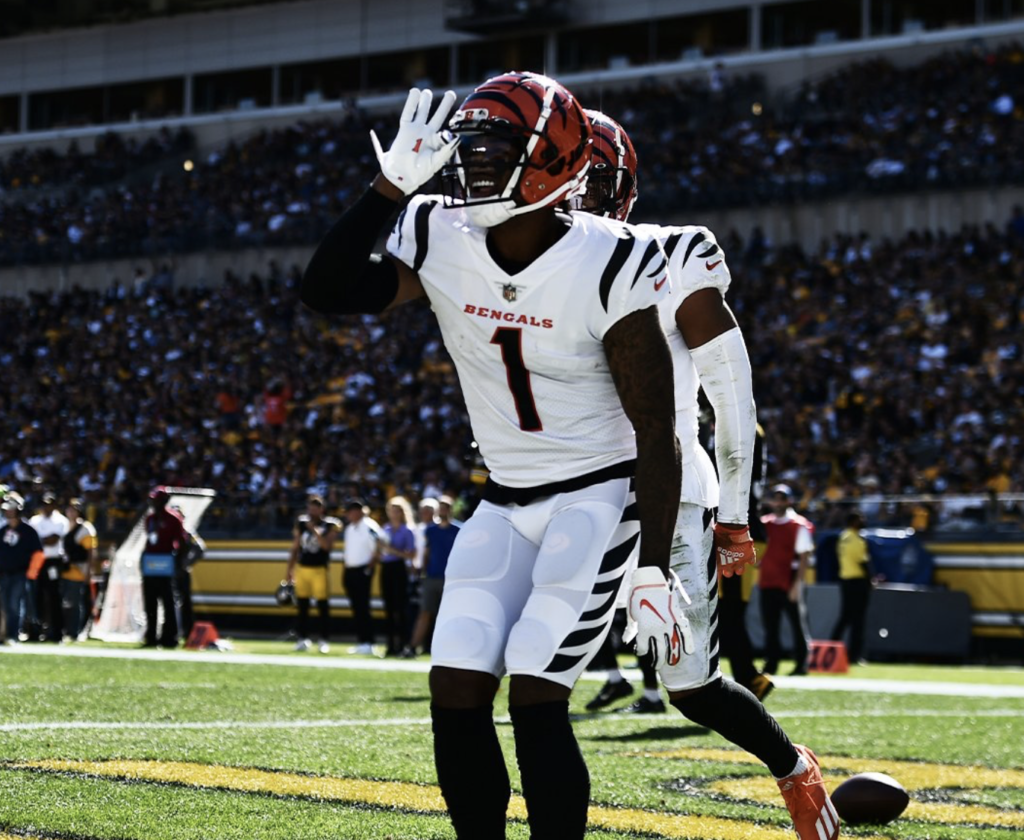 PITTSBURGH — Ja’Marr Chase had a pair of touchdown catches, including a sensational fingertip grab at the end of the first half, and linebacker Logan Wilson picked off a pair of passes as the Bengals beat the Pittsburgh Steelers, 24-10, their first triumph at Heinz Field since the 2015 team started 8-0.

The Bengals improve to 2-1, winning on the road for just the second time in 18 tries in the Zac Taylor era. They are tied with the Ravens and Browns, both of whom also won Sunday. The Steelers are all alone in the basement at 1-2 to start the season, with both losses coming at Heinz Field.

The Steelers made a late push, driving to the Bengals 11 where they faced third-and-10. Vonn Bell made a nice deflection on an incompletion. Then on fourth down, Roethlisberger chose a swing pass to Najee Harris. Sam Hubbard led a swarm of Bengals to the ball, pushing him out of bounds 11 yards shy of the first down and the Bengals took over.

The Bengals held the Steelers without a sack on the day, breaking a streak of 75 games in which the Steelers defense had recorded at least one sack.

Wilson put forth a performance that will likely land him with AFC Defensive Player of the Week honors. In addition to the two interceptions, Wilson had a game-high 14 combined tackles.

After the game, Jonah Williams said Zac Taylor was proud of the team’s effort but reminded them that this is “our standard.” That standard gets a quick turnaround test as Trevor Lawrence and the Jaguars visit Paul Brown Stadium Thursday night on “Ring of Honor” night.

The only bit of bad news was a groin injury that forced Chidobe Awuzie to miss the last quarter of action. The Bengals had Darius Phillips and Eli Apple on the field to close out the game.

Here are the main takeaways:

Ja’Marr Chase: His fingertip grab of a perfectly dropped rainbow from Joe Burrow with 34 seconds left in the half completely changed the tenor of the game. The Steelers had just driven 86 yards in 15 plays, chewing up over eight and a half minutes of the second quarter. Ben Roethlisberger’s four-yard touchdown pass to tight end Pat Freiermuth tied the game, 7-7. The Bengals got the ball back at their 25. Burrow completed passes to Tyler Boyd to the Cincinnati 32. A roughing the passer call on the next down to Melvin Ingram III put the Bengals at their 47. Then a 15-yard slant to Mike Thomas put the ball at the Pittsburgh 32 in a matter of 20 seconds. On the the next play, Burrow laid the dime of the game to Chase, who beat corner James Pierre.

Sealed with a KISS. https://t.co/JhYXsGPTjg

Logan Wilson: Two interceptions and patrolling the middle of the field in pass and run. Lou Anarumo deserves credit for designing and leveraging the defense to his strengths so far this season. Wilson’s third quarter interception leading to Chase’s second touchdown of the day was a repeat of his fourth quarter pick in Chicago. Reading the quarterback and making the pick when Roethlisberger didn’t read him.

The story of the first 20 minutes of the game was the dominance of the Bengals defensive line. D.J. Reader and Larry Ogunjobi again. Both disrupted the line of scrimmage early and often, not giving Roethlisberger time to settle in the pocket and pick on the Bengals secondary. Cameron Sample recorded his first NFL sack of Roethlisberger in the second quarter.

Joe Burrow didn’t look great to start the game, badly overthrowing Tyler Boyd over the middle. The ball popped up in the air and was picked by Terrell Edmunds. The defense got the ball right back thanks to a hit on Roethlisberger’s right arm and shoulder by Sam Hubbard. The ball landed in the arms of Logan Wilson. With a shortened field of 42 yards, Burrow finally got the offense on track. He attacked the middle of the field, driving the Bengals into the red zone. From there, Burrow was as sharp as he’s looked all season. He finished the game 14-of-18 for an efficient 172 yards and three touchdowns.

Tyler Boyd played human pinball when he ditched linebacker Devin Bush on a dig route over the middle, freeing himself to catch a pass from Burrow on third-and-2 at the Steeler 17. He then bounced off linebacker Melvin Ingram III at the Steeler 10.

Joe Mixon had a great game cutting back against the aggressive Steeler front playing the wide zone run. He ran the ball 18 times for 90 yards and kept the Steelers honest.

The Steelers lone touchdown in the first half was spiced by some hurry-up to line of scrimmage, they attempted to keep the Bengals from swapping out personnel and trying to wear them out a bit. The Steelers were able to hold onto the ball for over eight minutes. Roethlisberger was 9-for-9 on a drive that took 16 plays.

The Steelers spent nine minutes in the third and fourth quarter and moved 88 yards but could only manage three points as the Bengals defense stiffened. The Bengals swarmed to Najee Harris on a fourth-and-10 swing pass and the game was sealed with just over three minutes left.