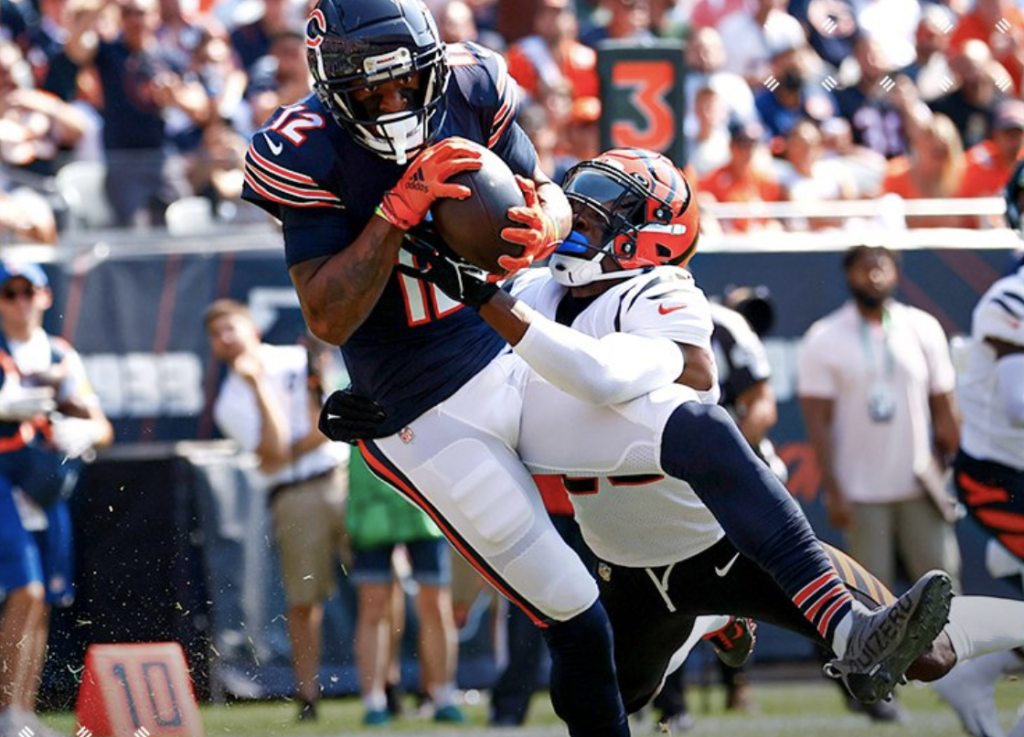 CHICAGO — Joe Burrow didn’t have enough magic to overcome his disappearing act for most of Sunday’s game.

Burrow had the worst game of his career, throwing three fourth-quarter interceptions. His first interception of the day was a pick-6 to Roquan Smith that broke open a close game and allowed the Bears to hold off the Bengals, 20-17, before 60,840 delirious fans at Soldier Field. Chicago intercepted Burrow three times on the day.

Burrow threw touchdowns to Ja’Marr Chase and Tee Higgins – following a Logan Wilson pick of Justin Fields – to make it close but the Bears successfully ran out the clock to seal Cincinnati’s first loss of the season.

The Bengals (1-1) fell to 1-15-1 in the Zac Taylor era and face the Steelers in Pittsburgh next Sunday in their first AFC North battle of the season.

Andy Dalton came out of the game late in the first half and did not return after falling on the Bears sideline on a scramble. Justin Fields took over and managed the game in the second half as the Bears defense tormented Burrow.

Logan Wilson failed to fall on a strip sack of Fields and the Bears got the ball back with the opportunity to punt. The play late in the third quarter eventually led to a dramatic change of momentum as Tee Higgins coughed up a potential big reception over the middle, leading to three Burrow interceptions in the fourth quarter.

The Good:
Evan McPherson: The rookie was right down Lake Shore Drive from 53 yards and hit the back net to put the Bengals on the board on the first drive of the second half. Kid Clutch continues to look completely unfazed by the NFL life.

The Bad:
The offense was completely out of rhythm and when they had their chances, they couldn’t hold onto the ball. Joe Mixon was held to just 28 yards on 10 carries in the first half. Joe Burrow was hurried all day and didn’t look comfortable in the pocket for the first three quarters. On this throw to Tee Higgins, he took a big hit but delivered a strike, only to have Tee Higgins fumble the ball away. That led to a Bears drive to a field goal.

Just prior to Higgins fumble, Logan Wilson’s failure to fall on a fumble after a strip sack resulted in the Bears being able to punt away to the Bengals 35 instead of the Bengals have the ball at the Chicago 25 in the third quarter.

Burrow was not good. He locked onto Tyler Boyd in the fourth quarter and Roquan Smith sat in a zone and picked off the pass and raced down the left sideline for a 53-yard pick-6 and a 17-3 Bears lead.

Striking fear in the hearts of QBs everywhere @RoquanSmith1 🔥 https://t.co/sJhIAEm0rE

The story of the first quarter was an utter lack of discipline and technique from the Bengals. A defensive pass interference on Eli Apple for pushing Marquise Goodwin out of bounds kept a drive going. Vonn Bell was called for taunting Andy Dalton in the end zone after blitzing and and getting a hand on the pass. A third and long near the goal line turned into a first down, keeping the defense on the field for another five minutes of play clock. Appropriately, the first quarter ended on a hands to the face penalty from Josh Topou.

Besides a lack of discipline, the Bengals had trouble covering Bears receivers before Andy Dalton injured his knee on a fall on the sideline on a scramble. Part of that was due to the fact that the Bengals were not generating any quarterback pressure, as the Bears converted all three third downs on their opening drive, leading to a Dalton-to-Allen Robinson TD on a slant in front of Chidobe Awuzie of 11 yards.

The other weakness of the Bengals defense in the first half was the secondary. Eli Apple was predictably picked on by both Andy Dalton and Justin Fields.