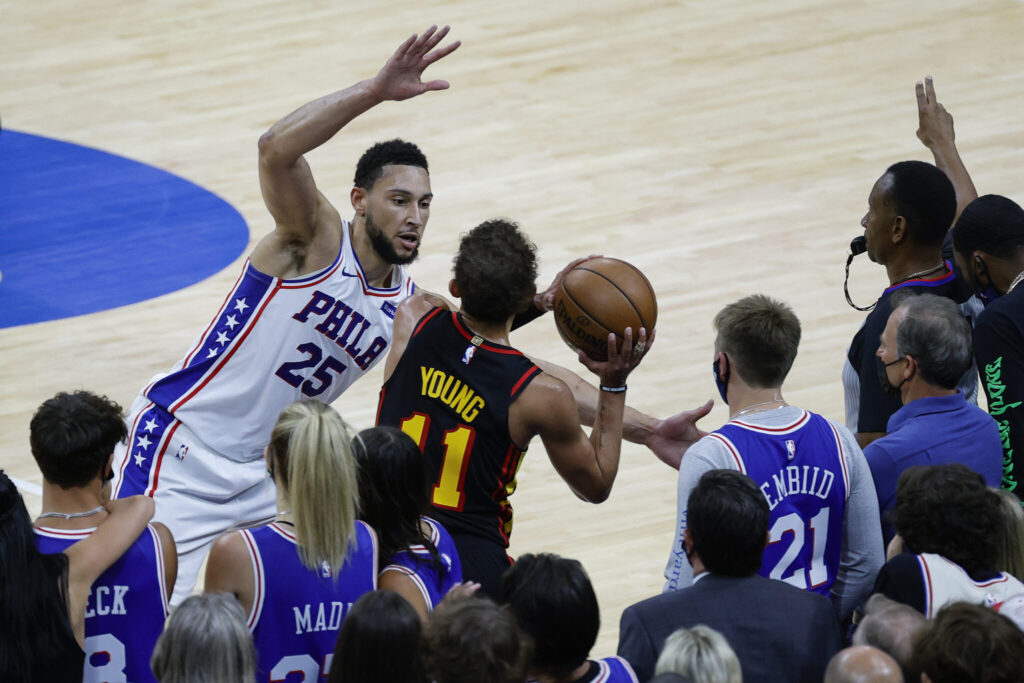 PHILADELPHIA, PENNSYLVANIA - JUNE 20: Ben Simmons #25 of the Philadelphia 76ers guards Trae Young #11 of the Atlanta Hawks during the fourth quarter during Game Seven of the Eastern Conference Semifinals at Wells Fargo Center on June 20, 2021 in Philadelphia, Pennsylvania. NOTE TO USER: User expressly acknowledges and agrees that, by downloading and or using this photograph, User is consenting to the terms and conditions of the Getty Images License Agreement. (Photo by Tim Nwachukwu/Getty Images)
Share
Facebook Twitter Email

The Ben Simmons camp and Philadelphia 76ers reportedly began discussing their futures in what could become a split via trade this week. Simmons shot a hair above 30% on free throws this postseason, the worst in NBA Playoff history at his volume. He shot 0 field goals in five of the seven fourth quarters in the 76ers-Hawks series and passed up a wide open dunk in a one-possession game late in Game 7.

Use code CLNS50 for 50% off your first deposit on Betonline.ag.

The Hawks beat the 76ers in Game 7, casting doubt on Simmons’ future with the team after five seasons following less than full endorsements from Doc Rivers and Joel Embiid. Betonline.ag lists the Trail Blazers (+200) as favorites to land the 24-year-old, who’s signed through 2024 at over $30-million per season.

As for the ongoing NBA Playoffs, Betonline is offering -700 odds for the Suns to reach the NBA Finals ahead 2-0. A Clippers comeback would net you +520 odds. The Bucks are still favorites in the Eastern Conference Finals (-215) despite the Hawks’ (+185) Game 1 win.

Use code CLNS50 for 50% off your first deposit on Betonline.ag.