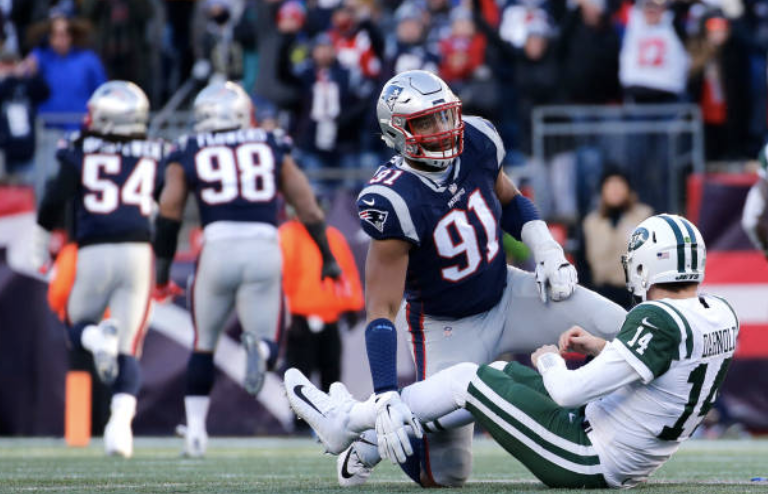 Dont’a Hightower just watched his defensive teammates allow Matt Ryan come out in the third quarter and march down the field and punch it in for a 28-3 Atlanta lead. Hightower went over to his teammates sat down and emphasized the moment of urgency facing the Patriots.

“This is it. No more, ‘my bad,'” Hightower told his teammates on the sideline.

Sunday, during a game the Patriots needed to clinch a first-round bye and some valuable rest during the wild card round of the playoffs, it was Flowers who recalled that moment and applied to the entire postseason this Patriots team is about to enter.

The Patriots were certainly not in the dire straights Sunday that they faced in making the greatest comeback in Super Bowl history. The defense took it to Darnold and the Jets from the onset of the game.

They held the Jets to two red zone opportunities, denying them both times. The Jets went for it twice on fourth down, including fourth-and-inches in the third quarter and the interior line turned the Jets away.

Yes, it was a rookie quarterback leading the 4-win Jets into Foxboro but it was the attitude that mattered most Sunday.

“I think we’re just playing more physical,” Adam Butler said. “Up front and in the back end too. We’re playing more aggressive and more confident. We understand the offenses.”

The highlight of the day for the defense was the interior push that Adam Butler and Trey Flowers got in the third quarter on Darnold, forcing the quarterback to fumble and allowing Kyle Van Noy to scoop and score from 46 yards for his second defensive score of the season.

“Trey’s given us great play all year,” Bill Belichick said. “He’s a tough matchup guy. He played left end and he also played inside today as he does in most games. He can match up on the tackles. He can match up on the guards and centers and that gives us some flexibility with some other players as well. He’s had a tremendous year for us and he always does a tremendous job.

“Nobody works harder than Trey does. His toughness, his durability, his consistency and his ability to play the running game, the passing game and to play it in different positions – you don’t see a lot of guys on the defensive line but he’s done it and he’s done it well and it’s certainly helped our overall defense as well as whatever spot he plays. His ability to have versatility and move helps us in other ways too. He does a great job for us.”

“You’ve got to be prepared. You’ve got to have that urgency, that precision, that focus on technique. You’ve to be in the right position when you’re supposed to be. I think a lot of guys in here understand that. We’ve got a ‘do your job’ mentality. We’ve got that type of focus going into the postseason.”

It’s the consistency now. That’s the biggest question. The Patriots at home, where they were the only NFL team to go a perfect 8-0, are a completely different beast than they were on the road. And the difference has been the swagger and attitude.

“It’s definitely coming together,” Flowers added. “It’s one of the things that we have to build ourselves on and it starts in practice. We go from the practice field and bring it to the game field with execution on Sundays. It’s just one of the deals that you have to play your top football at this point of the season going against some great teams. You’re going to have to be able to execute well on Sundays.

“It’s one of the things that we can allow ourselves to recoup physically and mentally. It’s just an extra week to get ourselves together and that’s always important.”

Mega Patriots vs Bills preview and paths to a Patriots upset