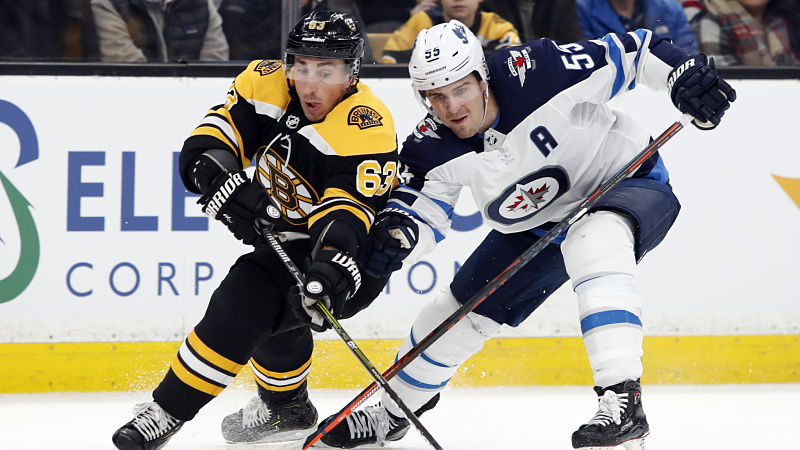 If a stranger asked you to explain the 2018-19 Boston Bruins, you’d hand them this game and tell them to watch it.

On Tuesday night, the Boston Bruins fell to the Winnipeg Jets 4-3 in a shootout. The B’s walked away with a point against the top team in the Central division while leaving one on the table that, until the middle of the third period, seemed to be all theirs.

As the game was happening, every single storyline that’s helped or plagued this team since day one was on full display.

All scoring came from the Marchand-Bergeron-Pastrnak line

Except for one assist from Torey Krug, every bit of scoring for the Bruins came from their top line.

Returning from the nine day break, Patrice Bergeron looked as rejuvenated as anyone with his two-goal performance. He was in classic form scoring a goal from the bumper and then later in the game on a two-on-one — both feeds from Brad Marchand.

Patrice Bergeron scores the first goal of the second half for the Bruins!

David Pastrnak added in his stereotypical one-timer on the power play for the second goal of the game. He now leads the league in power play goals and is tied for the league-lead in power play points.

As the NESN broadcast pointed out during the game, this top line had a shaky ending to the first half. They looked tired. Bergeron wasn’t kidding when he said he’d rather the rest than the trip to San Jose.

The most David Pastrnak goal ever. Bruins take the lead

All of their scoring is well and good and it’s the main reason the Bruins are even in the playoff race. But there’s one problem…

There was NO secondary scoring

It feels as though this has plagued the Bruins since Moses delivered the 10 commandments atop Mount Sinai.

Tuesday night saw the Bruins second, third and fourth liners produce nothing. The fourth line had their usual chances, David Krejci did what he could and the third line was….there.

But when it came down to it, there was no sign of them on the scoresheet and to preach to my point again, that’s been the deal with the Bruins after 37, 63, and 88.

It’s been beaten like a dead horse but Danton Heinen continues to become more and more invisible in these games. Both his offensive output and trade value have plummeted since the start of this season.

If tonight proved anything it’s that if the Bruins want to hang with good, Stanley Cup contenders like the Jets, they’re going to need to add some secondary scoring help.

Who wants to be the one to call Brayden Schenn?

This topic is one where my colleague Jimmy Murphy and I disagree. I even went so far as to challenge him on Twitter with it a few weeks ago which is the coup de grâce when it comes to coworkers.

On Tuesday night, the Bruins got a fight from Kevan Miller and then in his NHL debut, Trent Frederic destroyed Jets forward Brandon Tanev.

The hottest debate surrounding the Bruins this season has revolved around one question: add toughness or add a second line winger?

On one side you have Murphy and Joe Haggerty advocating the team get tougher. On the other side you have writers like Matt Kalman, Ty Anderson and myself saying the team doesn’t really need toughness and instead should focus their deadline dealings solely on secondary scoring.

The Bruins rank third in the NHL in penalty minutes and second in fighting majors. A goon on the fourth line to protect the Bruins’ most prized possessions isn’t going to be what gets them past the Tampa Bay Lightning come April and May. A second line winger who can score will at least get them closer to that level.