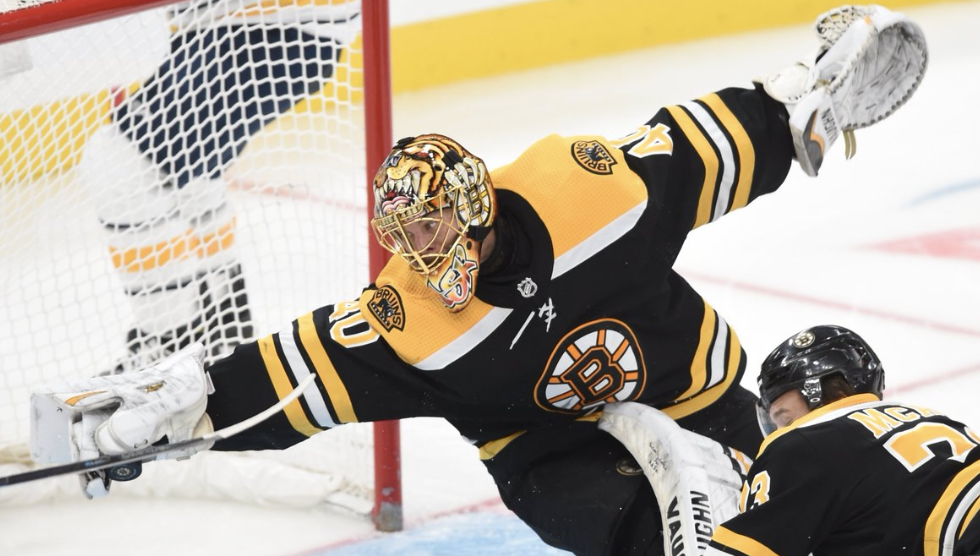 BOSTON – It’s hard to blame the Bruins for their incredibly sluggish start Thursday night. After all, the change of seasons is tough on everyone.

But they can thank their lucky stars that Tuukka Rask apparent had his mood lamp working before their game with the Sabres.

Brad Marchand scored twice, David Pastrnak netted his NHL-leading 20th goal and Rask made the save of the year on Buffalo’s Evan Rodrigues as the Bruins snapped a three-game home losing skid with a 3-2 win at TD Garden. Rask stopped 36 of 38 shots in picking up the Bruins on a night they most certainly didn’t bring their “A” game.

“We didn’t play our game tonight; we won with our B game,” Bruce Cassidy said. “We won with goaltending, timely scoring on special teams and power plays. There’s a lot of areas of our game that were not good enough tonight, and we got away with it.”

That’s one way of putting it.

“Sometimes he has to do that a few times a game,” Marchand told me. “He had to do that the whole first period, couple times through the game. That’s what he’s paid for, he better keep doing it. You know the situation. We know we’re not getting any offense out there. We know we need to be better. We don’t need to see the shot total to know that but it just kind of shows how bad we were playing.

A Sabres team that started 9-2-2 in the month of October has gone ice cold in November, winning just once in eight games. They were obviously desperate and played like it right from the start.

Bruce Cassidy has made “showing up on time” a priority for his Bruins since he arrived in Boston. Judging by the first 11 minutes Thursday, they not only didn’t show up, they were still in bed taking an extended game-day nap before the game.

How else to explain Buffalo outshooting Boston, 14-0, to open the contest.

“You know what I’d describe it as? Atypical of us,” Cassidy said. “We’re generally a good team that starts on time, especially in this building. We’ve had a couple not, but tonight was definitely our worst start of the year. That’s how I’d describe it, in pretty much every manner.

They were just lucky that Tuukka Rask did set his alarm. The Bruins goal was peppered non-stop for the first 10 minutes, including one stretch where the Sabres had the puck in the Bruins zone for three minutes non-stop.

The Sabres, featuring their franchise superstar Jack Eichel, managed to take a 1-0 lead on a power play when Eichel fired a laser of a shot on Rask. The Bruins goalie couldn’t control the rebound cleanly and defenseman Rasmus Ristolainen put it back for the power play goal 5:25 into the game.

At that point, shots were 4-0. The Sabres would rattle off another 10 unanswered before Brandon Carlo’s slap shot from the mid-slot was stopped by Sabres goalie Linus Ullmark for Boston’s first shot on goal. That act of simply putting a shot on goal 12 minutes, 11 seconds into the game was met with a nice resounding sarcastic cheer from the Garden crowd.

The next Bruins shot, a slapper from captain Zdeno Chara from the left point, was re-directed in front by Brad Marchand to tie the game at 13:52 of the first. The Sabres had out-shot the Bruins, 17-4, after the first period and remarkably the game was tied.

The Bruins came out with more juice in the second period. And eventually that push was reward when Marchand finished off a power play with his second goal of the night.

Brad Marchand gives the Bruins the lead on the Power Play#Sabres50 1#NHLBruins 2 pic.twitter.com/vZwLdBV7dK

Another power play goal, this one from David Pastrnak just under two minutes into the third, put the Bruins up, 3-1, and gave the NHL’s leading goal scorer his 20th goal in 22 games.

Then minutes later, with the Sabres re-discovering their mojo, Rask spun around and turned away an Evan Rodrigues shot with his palm.

“I didn’t want to look, honestly,” Rask said of the video replay on the board that put the whole Garden and his teammates in awe. “I’m not used to making saves like that. I didn’t want to fist-pump myself because that’s harder to shake off than a bad goal.”

“Yeah, you kind of don’t know what happened there, to be honest with you,” Cassidy said. “That was a Dominik Hasek save. For you guys, young people out there, he was an old goalie in the league, very acrobatic. And that’s what it was. I think everyone does get up and realize that we should have been scored on, really, I mean, we should have. So, it does give you a boost. Big plays give you a boost, right? Saves are a part of that, and it sure did for us.”

“That’s the highlight save of the year. That’s why he’s making the big bucks and we’ve got him back there to save our butts and we’re lucky to have him.”

The lesson of Thursday night is that a “B” effort on most nights will get you beat against a desperate team. The Bruins got away it Thursday.

“I just thought for us, no urgency early on where you need to have that every night in this league,” Cassidy added. “So, no I don’t think where we want to be. I’ve said it before – I don’t think any team is; maybe the Islanders with their streak, but we’re not. We’re still building our game and able to win in the process is a good thing; it’s a sign of a good team, but we’ve got a ways to go.”