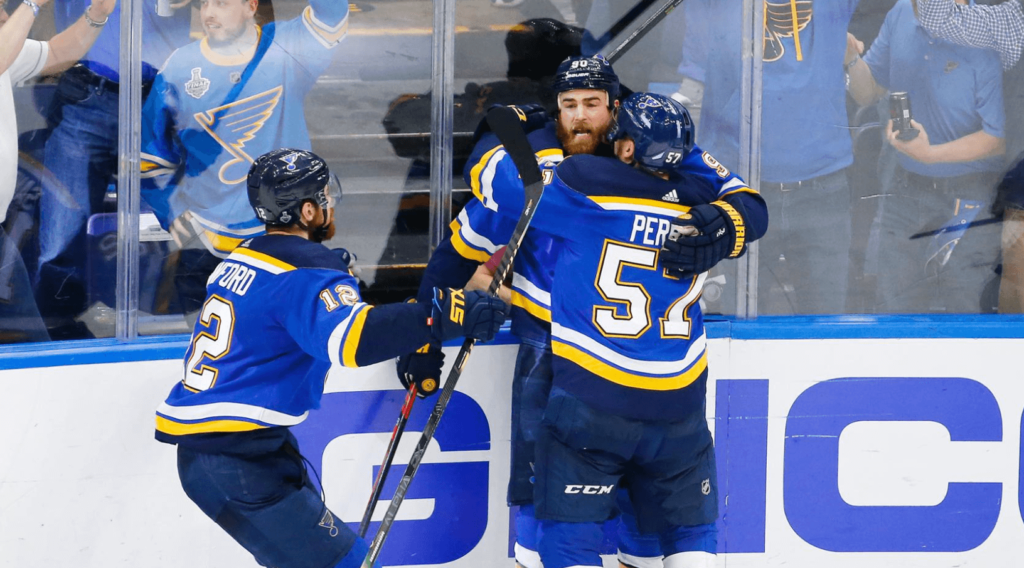 In the end Monday night, the Bruins relied far too much on their best player.

Tuukka Rask entered Monday night’s Game 4 as one of the best road playoff goalies – ever.

The numbers back it up: With his win in Game 3, Rask established a franchise record for road wins in a single postseason – improving to 7-2 away from home in the 2019 Stanley Cup Playoffs. Overall, it was Rask’s 22nd career road victory in the Stanley Cup Playoffs (22-17), tied with Gerry Cheevers (22-19) for the most in Bruins history.

Before allowing three goals on 37 shots Monday in a 4-2 Blues win that evened the Stanley Cup Final at 2-2, Rask had a .936 save percentage in his career on the road, the best among goaltenders since 1955-56 when shots on goal were first tracked (min. 30 GP on road).

Rask’s 1.97 goals-against average as a visitor in the playoffs ranked second in NHL history among goaltenders with at least 30 road appearances.

The point is: don’t blame Tuukka Rask for the Game 4 loss in St. Louis that has turned the Stanley Cup Final into a best-of-3 series.

The Bruins goaltender, a leading candidate for the Conn Smythe Trophy given to the best player in the NHL playoffs, was under constant assault for the entire 60 minutes Monday night at the Enterprise Center.

In the first minute Monday night, 22-year-old defenseman Vince Dunn had the first of his nine shots on net in his return from a facial injury earlier in the playoffs. Ryan O’Reilly collected the puck, went around the net and his wraparound just beat Rask for a 1-0 lead that immediately energized the home crowd.

The Blues easily could have added two or three more goals in the next five minutes as they had relentless offensive pressure, something to be expected from a team knowing it had to win or else face elimination Thursday in Boston.

But Rask stood tall. Then the Bruins tied it when Zdeno Chara centered a pass on goal and Charlie Coyle put it past Jordan Binnington for a 1-1 game. The Blues took a 2-1 lead later in the first period when Vladimir Tarasenko collected a rebound in front.

The Blues’ momentum carried into the second period, highlighted by a remarkable three-minute push midway through when the Blues played like a team possessed and the Bruins couldn’t get off on the long change period. Connor Clifton had a 3-minute shift. He took a penalty only to have Brandon Carlo score his first career playoff goal, short-handed.

But the spurts for the Bruins were nowhere close to the number of the same for the Blues. In a heavyweight fight, it’s great to take a punch but eventually you lose steam fighting off punches and can’t muster enough of your own.

That was the fundamental flaw Monday. The Bruins relied far too much on Rask to hold them in the game in a hyper-charged arena. There were moments Monday but not nearly enough. The Bruins blasted rookie goalie Jordan Binnington out of his own building on Saturday, chasing him from the net in a 7-2 Bruins win.

On Monday, the Bruins had exactly one shot on Binnington in the final 9 minutes, 22 seconds after O’Reilly’s go-ahead score made it 3-2. Every Bruin will tell you that’s unacceptable. Rask faced 37 shots to Binnington’s 23. Again, that’s about determination. Seven of those 23 came from two players (Pastrnak, 4 and John Moore, 3).

“The start wasn’t obviously the kind we wanted,” Rask said. “They were a desperate team. Guess they were a little more desperate than we were today. They were that much better.”

Carlo offered some support with his goal. So, too, did captain Zdeno Chara, who took a puck off the chin early in the second period. Chara’s only time in the third period on the ice – wearing a bubble shield over his face – was during a TV timeout to pump his teammates.

Carlo stepped up huge in the second period to pick up the slack but still it wasn’t enough. Now, the series is tied with the Bruins potentially having two of the next three at home.

“I like it,” Carlo said of the series now down to three games. “We’ve been very good at home all year. Going home in front of our home fans and playing our hearts out.”

“We can do a better job of getting the puck and winning puck battles and not spending as much time (in the defensive zone),” said Patrice Bergeron. “We never said it was going to be an easy series so there’s no surprise there.”

Coyle became the first Bruin to score in three straight Cup Final games since The Chief, Johnny Bucyk did so in 1970 against this same Blues franchise.

But those are hollow facts now. It’s a best-of-3 starting Thursday with Game 5 in Boston.

“I don’t think it’s a surprise to anybody. Gotta go home and take care of business. Everybody expected a hard-fought and tight series.”

The Bruins have looked like the deeper and more talented team for better part of this series. But on Monday, the Blues were the hungrier team.