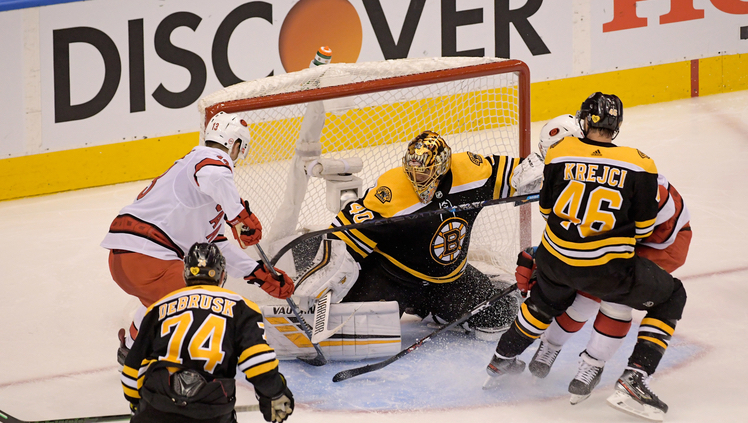 Tuukka Rask strolled into his postgame press conference in what appeared to be a good mood after the Bruins’ 3-2 loss in Game 2. He was open and honest when answering questions about how he managed playing in a back-to-back and how his hip flexor felt.

He was also open and honest when asked about “playoff hockey being playoff hockey” and if the Hurricanes were doing anything extra when invading his crease.

“To be honest with you, it doesn’t really feel like playoff hockey because there’s no fans,” Rask said Thursday night via Zoom. “It’s kind of like you’re playing an exhibition game. Obviously, there are some scrums after the whistle. I haven’t noticed that they would be targeting me or what not. Things happen, people falling on you and what not. But it’s definitely not a playoff atmosphere.”

He continued in a follow-up question.

“You’re trying to play as hard as you can,” Rask said. “Obviously, you’re playing a best of seven series so there’s going to be some battles going on and what not. But when you play at your home rink, you play at an away rink, and there’s fans cheering for you or against you and that creates another buzz around the series. There’s none of that, so it just feels dull at times. There’re moments that, – ok, there’s little scrums and what not. But then there might be five minutes and its just coast to coast hockey and there is no atmosphere. It just feels like an exhibition game.”

Let’s evaluate this. Are those smart things to say after a playoff loss? Nope. No city in America takes a postseason game more seriously than Boston.

Will he get tons of criticism for this? Oh yes. I’d advise Rask not to check Twitter or turn on the radio Friday. Fans are already taking to Twitter saying Jaroslav Halak should become the starter immediately and that Rask should be sent home. Sports talk radio will echo those sentiments.

There’s some legitimacy to taking issue with when he chose to say this. It’s a bad look to let this out after a first-round loss. It’s also not encouraging for fans to hear this after he’s been a bit shaky since arriving in Toronto. A 1-3-0 record with a 2.57 GAA and .904 save percentage makes the Bruins faithful wince. Add in lots of outrage towards him to begin with and saying it “just feels like an exhibition game” certainly doesn’t help.

But is Rask wrong in saying this doesn’t feel like a playoff atmosphere? No.

What he said is true — this isn’t a typical playoff atmosphere. There are zero (0) fans to help swing momentum on a big hit, save or goal. The filtered in crowd noise when a scrum takes place doesn’t quite match the moment like if it were happening at TD Garden or PNC Arena. We know this.

Through two first-round games, the Bruins don’t seem to have any issue with this impacting their play. They won Game 1, 4-3, in double overtime. Despite losing, 3-2, in Game 2, the Bruins had a strong opening period and unleashed an all-out assault on the Hurricanes in the second half of the final 20 minutes.

Brad Marchand, Sean Kuraly and Joakim Nordstrom killing off Charlie McAvoy’s hooking penalty midway through the final frame sure looked like a team with playoff intensity. It swung the momentum of the game completely — it was just too little, too late.

It’s understandable why there’s massive outrage over what Rask said. But the Bruins have much larger issues at hand, and they were extremely visible Thursday night.

None of them involve the goalie.

For starters, what’s going on with David Pastrnak? Just under 30 minutes before 8 pm, the Bruins tweeted Pastrnak was “unfit to participate” and wouldn’t play Game 2. NESN immediately pulled the footage of Pastrnak jumping up in the air and appearing injured after Bergeron’s OT-winner on Wednesday.

NESN saying this is where David Pastrnak may have gotten injured pic.twitter.com/5DJ0pAuUaD

“As for Pasta, he was questionable from the game yesterday afternoon and this morning he was getting treatment, unfit to participate, but we don’t believe it will be long term, that’s a day-to-day thing we hope,” Cassidy said after Game 2. “So obviously targeting Saturday at noon but until we see him tomorrow, and a tough Saturday at noon because it’s tough to test it, get out skating in the morning, so it’ll probably be right down to the game time again on Saturday.”

Based off of that, the Bruins’ most lethal goalscorer could still be out for Game 3. If it’s a nagging injury — and we probably won’t find out about what it could be due to COVID-19 restrictions — it could impact him throughout the postseason, which is exactly what Boston doesn’t want.

As for Game 2, the Bruins dearly missed Pastrnak’s offensive prowess at 5v5 and when they were at 6v5 in the final two minutes. The Bruins didn’t score any goals in either scenario.

Pastrnak potentially missing more time is a much bigger issue than the goaltender’s comments after the game.

Another issue that plagued Boston in Game 2 was their play in the defensive zone.

On Carolina’s second goal, Trevor van Riemsdyk, Martin Necas and Andrei Svechnikov cut through the Bruins’ defensive zone structure with ease. Dougie Hamilton’s game-winner came after a long shift of the Hurricanes controlling play as the Bruins packed it in tight. Nobody was near Hamilton when he sniped one past Rask.

Dougie Hamilton with a rocket of a goal against his former team just under halfway through the third to give the Canes the lead.

Both goals came against the David Krejci line. Zdeno Chara was also on the ice for the two lamplighters. That’s not a great sign for a team who prides themselves on a really strong defensive zone system.

The bottom line is Cassidy doesn’t need to break down Rask’s hotel room door, rip him out of bed and dropkick him all the way back to Boston. That actually isn’t necessary. He doesn’t even need to name Halak as the starter for Game 3.

Yes, Rask has looked a bit wobbly at times. But there is absolutely no reason for the Bruins to give up on him.

Not even for those ill-timed postgame comments.