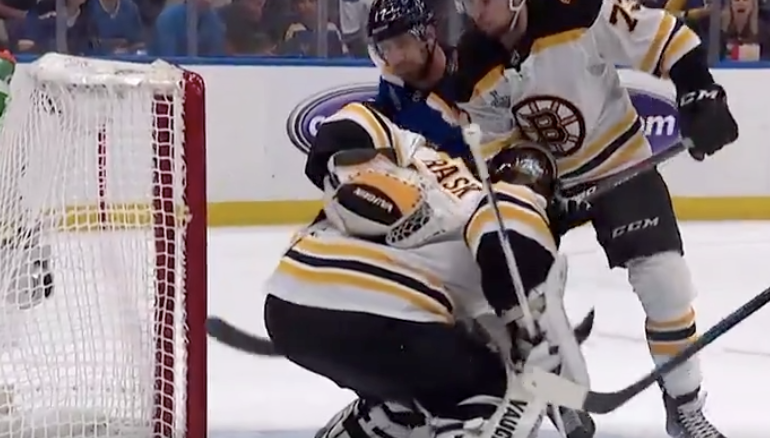 With 10:05 remaining in the second period and the Bruins holding on for dear life to a 1-0 lead during a penalty kill in a do-or-die Game 6 before 18,890 Blues fans set to celebrate, Alex Pietrangelo’s backhander rang off the crossbar and popped into the air.

Charlie McAvoy was on the spot to knock it into the back of Rask, who immediately and instinctively reached around with his left arm to make sure it didn’t fall dangerous to the ice. It was Pietrangelo who was tripped by Brad Marchand that drew the penalty the Bruins were feverishly trying to kill off.

“I saw the replay after when I was doing an interview,” Rask said. “It hit a post and then Chuckie hit it with his stick and I kind of heard it and I didn’t know where it was. I figured it might be somewhere behind me. I just tried to corral it with my hand and it fell into my pants. Chuckie made a great play to keep it out of the net originally. It’s never a good thing for a goalie to be facing the play with your back but luckily it stayed out.”

Rask was more than aware that, with the Cup in the building and there for the hoisting by St. Louis, the pressure would be on early.

“That’s been the story here (in St. Louis),” Rask said. “Obviously, the home team is trying to make a push and try to get that early lead. I think our penalty kill was big. They killed that first penalty and that was huge. I think we weathered the storm.”

The Bruins were able to weather that storm thanks primarily because they knew they could rely on Rask.

“It goes without saying he’s a big reason why we’re in this position and tonight he was definitely in the zone,” Patrice Bergeron said. “He was that spark. He made some tremendous saves to keep us in the game, especially early on.”

What is this sorcery by Rask and McAvoy!! #NHLBruins pic.twitter.com/5tMfmmTSMY

Sometimes, indeed, you need to be lucky to be good.

Rask was far from just lucky Sunday night when the Bruins needed him in their biggest game of the season. He was cool under pressure. Rask faced 12 shots on four Blues power plays Sunday night and stopped them all.

“The best player on the ice,” McAvoy told me in the most succinct manner possible.

After all, there weren’t many words needed to describe just how clutch Rask was Sunday.

Before Marchand gave the Bruins a 1-0 lead on a 5-on-3 power play goal from the left circle, it was Rask keeping the Blues off the board with save after save as the Bruins were killing off a Sean Kuraly delay of game penalty.

Rask makes these look so casual it's insane #NHLBruins pic.twitter.com/F0IErqBbmO

The only goal Rask allowed was on a right pad save on Ryan O’Reilly’s shot – but after it had already sneaked over the goal line with 7:59 remaining to give the Blues false hope. David Pastrnak and Zdeno Chara added the final tallies as Boston’s 5-1 win put to rest any repeat of 2013.

That was, of course, when Rask and the Bruins, leading 2-1 with 1:16 remaining, allowed two goals in a 17-second span to allow the Blackhawks to hoist the Cup on Garden ice. Thanks to Rask Sunday, the Bruins are the ones who could be hoisting the Cup Wednesday on that same Garden surface in the first-ever Stanley Cup Final Game 7 in Boston.

In five clinching scenarios, be it for Boston or the opponent, Rask has allowed just four goals in five games. He has a 0.80 goals against in those games and in three elimination games where he’s had to be great, he has been, winning twice on the road in Game 6 to force a Game 7.

“It’s hard to really pick one at this point,” Bergeron added when asked if Sunday’s Game 6 roadie was Rask’s best performance of the playoffs. “I thought he was tremendous against Carolina as well. He’s been at his best for a while now.”

Now, Rask and the Bruins have to win just one more time to raise the Stanley Cup and raise a seventh banner to the rafters at the Garden.