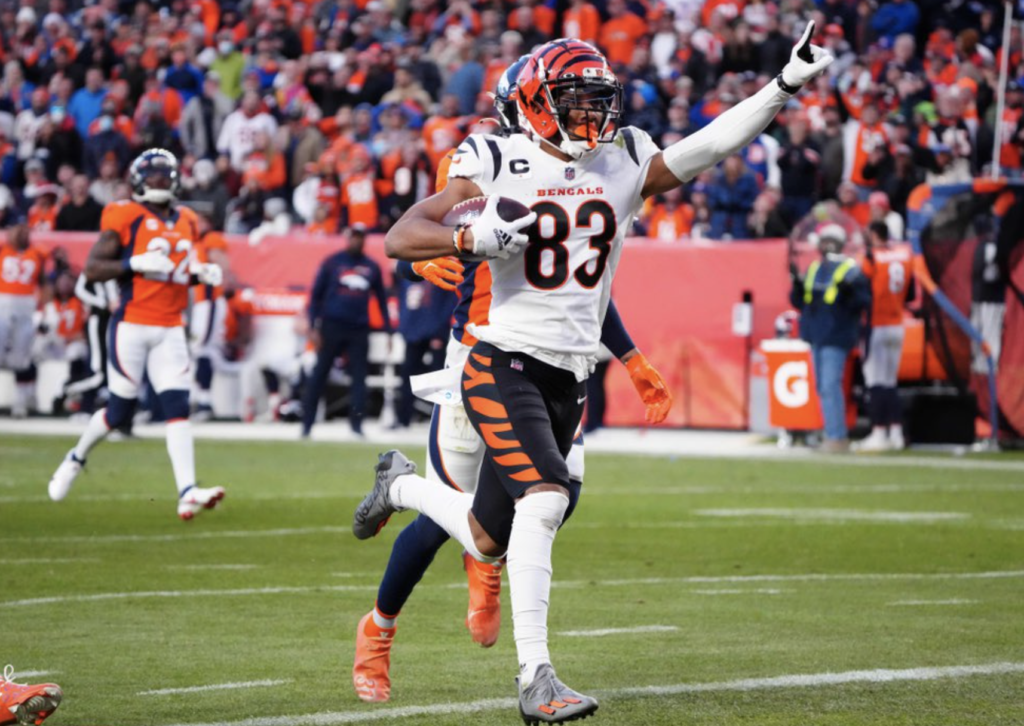 CINCINNATI – The exciting part of what the Bengals are right now is what they could become.

Watching Joe Burrow run a no-huddle, hurry-up at the end of practice Tuesday was something to behold, with completions to Ja’Marr Chase, Stanley Morgan and Mike Thomas wrapping up the 75-minute practice in the heat.

Burrow has been making sure to get all his weapons involved in these practices, calling plays at the line and keeping everyone sharp and focused, including Tyler Boyd and the rehabbing Tee Higgins who is just watching from the sidelines for now.

While everyone knows the potential of AFC Offensive Rookie of the Year Ja’Marr Chase and deep threat Higgins, it’s really important not to minimize just how critical Boyd, one of the game’s most reliable slot receivers, can be to what these Bengals want to accomplish this season on offense.

As a veteran coming into his seventh NFL season with the Bengals, Boyd – a team captain – is the glue to the receiving corps.

Boyd is the guy Chase and Higgins look up to. Boyd is the guy that Burrow knows knows the offense. The second rounder out of Pitt in 2016 had 67 receptions for 828 receiving yards and five receiving touchdowns in the regular season. Before last season, Boyd led the team in catches for three straight seasons and is just one of six Bengals in history with consecutive 1,000-yard receiving seasons.

While Boyd was the go-to guy for much of his first five seasons, last year was different. It’s how he handled the emergence of Higgins and Chase in the offense that earned him respect throughout the Bengals locker room.

“It’s the personalities. I know because myself, when I come in here, I bring the same energy every day,” Boyd said after Tuesday’s practice. “I don’t ever change the way I come in about work. We have a lot more guys like that, that are coming in the same way, ready to work, don’t complain. It’s just the people around you that are giving you motivation, making you want to be here.”

There’s a good reason Boyd’s stall is next to Burrow’s corner home in the Bengals locker room.

Boyd was up on that podium with Joe Mixon and Jessie Bates after the hideous loss to the Jets last year at MetLife Stadium. Boyd was the guy who caught the 56-yard touchdown and outran Justin Simmons to the end zone at the start of the fourth quarter in Denver last December.

And Boyd was the guy to stand up and take accountability for his only drop of the season in Super Bowl LVI, a catch that might have resulted in a drive-sustaining first down with 6:20 left in the fourth quarter, and the Bengals leading, 20-16.

The Bengals have just started to scratch the surface of what this offense can be. That’s why these offseason practices in May against air and this month’s OTAs are so important. It’s getting rhythm and timing down.

Joe Burrow said two weeks ago that this offense can’t afford to get off to the sluggish start it experienced last season. Making sure things feel second nature is a big step toward accomplishing that goal.

“That’s what a successful offense starts to do once you get the feel of the offense and the scheme, you can do so much more. We might not even need the huddle at this point. You never know.”

I asked head coach Zac Taylor Tuesday why it’s so important not to take Boyd’s professionalism for granted.

“I don’t usually think of it that way,” Taylor said. “He’s really consistent. I really appreciate that. He’s got great, intimate knowledge of our systems and why we’re doing a lot of different things. I think he and Joe (Burrow) have a really good rapport and relationship and chemistry, just from a routes perspective.

“He does a good job in the run game and understand why that’s so valuable. Again, I like to think we don’t take him for granted but he’s just been so consistent day to day. That’s exactly what we’re looking for from all of our guys, and Tyler is a great example of that.”

You hear it all the time from coaches and players in the NFL: If you think, you’re dead. The thinking should come in preparation before you step on the field for practice or a game. Teams have offensive and defensive team meetings and playbooks for a reason.

Tuesday’s no-huddle was a type of pop-quiz chance for Taylor to quiz the offense to see if they’re where he feels they should be. Are they doing their homework and staying on course before summer vacation hits following OTAs over the next two weeks? At first glance, sounds like Professor Taylor gave his students a passing grade.

“The tempo was good, not only from TB but a lot of the other guys that have been doing this for a while,” Taylor told me. “I really thought with our twos and threes, they got up to speed very quickly so that’s a credit to the coaches also,” Taylor said. “We haven’t been talking about this for very long. This was a (spontaneous) thing. So, for these guys that maybe haven’t had a lot of reps in our offense, to get up to speed and do the right things was good to see.”

“Once you know the system in and out, you play more confident, you don’t have to think as much so I feel like you open up your game where you can actually focus more on your ability, what you want to do and try to do out there (on the field), not having to go out there and think about it,” Boyd added. “You gain confidence because of what you’ve done the year before.”

Boyd understands fully the nuance of preparation vs. playing over his six seasons, during which he has risen up the ranks of an organization that has always prided itself on possessing some of the game’s greatest receivers. Think about the history.

After one season together, there are those who would put that trio in with that class immediately. But Taylor and Boyd will both admit, one nice season is not what this group is about. It didn’t bring home the hardware when they had the chance in February.

If this group truly wants to separate itself from those other incredible classes of wide receivers in Bengals history, they need to do something special this season, something – with a uniquely gifted quarterback – they are fully capable.