The USMNT went head to head with the Mexico National Football Team in a highly anticipated match resulting in a scoreless 0-0 draw. 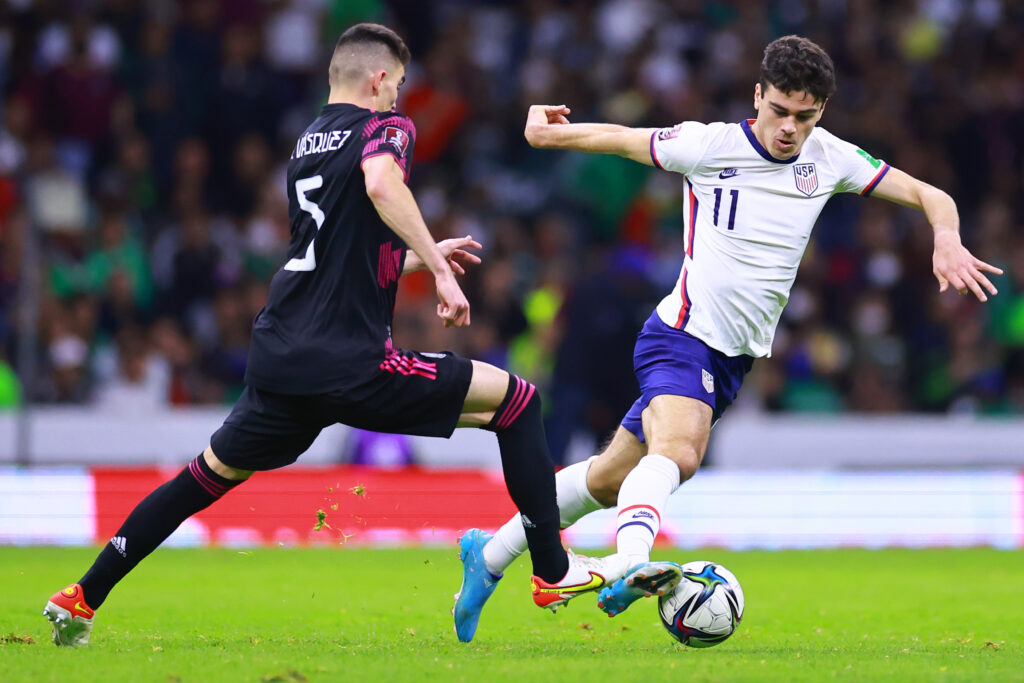 The US Men’s National Soccer Team (USMNT) earned a hard-fought 0-0 tie against Mexico on Thursday night. The win gave the US a crucial point and brought them one step closer to World Cup qualification.

While the US got the result it needed, the team missed a golden opportunity to leave Mexico with a win.

The U.S. had the game’s two best chances, but Christian Pulisic and Jordan Pefok both missed from close range, either of which might have resulted in the team’s first ever win at the Estadio Azteca in World Cup qualifying.

“It was a good effort of the group, we dealt well with the conditions, the point will be a valuable point…”@jennyachiu caught up with @USMNT coach Gregg Berhalter after the match. pic.twitter.com/uUShMPdV3E

To say the US failed to cash in on two good opportunities would be an understatement. Pulisic missed a clean look in the first half on a ball from Tim Weah after stumbling and failing to make clean contact. Bad as the miss by Pulisic was, Pefok’s was much, much worse. Pefok was alone in front with the entire net to

But the miss by Jordan Pefok is the thing of nightmares. Off a brilliant pass from Gio Reyna Pefok’s shot from the centre of the box went wide to the right.

“We put ourselves in a position to play on Sunday and win and go to the World Cup,” Pulisic said afterward. “But of course I’m disappointed I missed a chance, and I would have loved to have won the game.

“I think it’s a game that could’ve gone either way. I thought we had the better offensive chances and we had good spells, but a draw is fair.”

Man of the match

Giovanni Reyna hasn’t played in a World Cup qualifier since last September when he picked up a hamstring injury. Yet he definitely left a mark in his long-awaited return to the USMNT. Reyna subbed in for Timothy Weah at the 60′ mark and brought a renewed energy to the field. In his 30 minutes of playtime, Reyna made 5 successful dribbles and won 6 ground duels. He delivered the skill check of tonight with his dribble through midfield past the El Tri defenders and opening up a possible goal attempt.

However, his most notable moment was setting up Pefok’s golden chance to score. At the 72′ mark, Kellyn Acosta orchestrated a perfect ball to Reyna in the box. Reyna then passed the ball across to Pefok for the goal, but the striker’s attempt was blocked by Ochoa. Despite Pefok missing, Reyna showed everyone his ability to move the ball and create openings.

We see you Gio Reyna 🔥 pic.twitter.com/F49wJUzd07

Defender DeAndre Yedlin earned his second yellow card of qualifiers at 25′ for a reckless tackle against Mexico’s Edson Álvarez. As a result, he will be suspended from playing in Sunday’s game against Panama. With Yedlin suspended, Reggie Cannon testing positive for COVID-19, and Sergiño Dest out for a thigh injury,  Shaq Moore has been called in to play against Panama and Costa Rica.

Winger Timothy Weah also received a second yellow card of the qualifying rounds and will be suspended from Sunday’s game.

The tie earned the USMNT a valuable point to move into 2nd place in the Confederation of North, Central America and Caribbean Association Football (CONCACAF). Both teams are tied at 22 points, but a +3 goal differential edge puts the US ahead of Mexico. The US sits behind Canada with 25 points.

The top three teams qualify for a bid at Qatar while the fourth competes in a two-game intercontinental playoff for a spot at the World Cup.

All eyes are on Sunday’s matchup in Orlando between the US and Panama. A win would push the USMNT into a position to qualify for the 2022 World Cup. To clinch a direct World Cup qualification, the US would need to beat Panama with Costa Rica drawing or losing against El Salvador. Alternatively, the US could draw with Panama and Costa Rica would need to lose its match.

The US Men’s National Soccer Team are back in action on Sunday, March 26, at 7 P.M, against the Panama National Football Team at the Exploria Stadium.