Many critical questions to be answered as Bengals plan to make best use of their cap space. 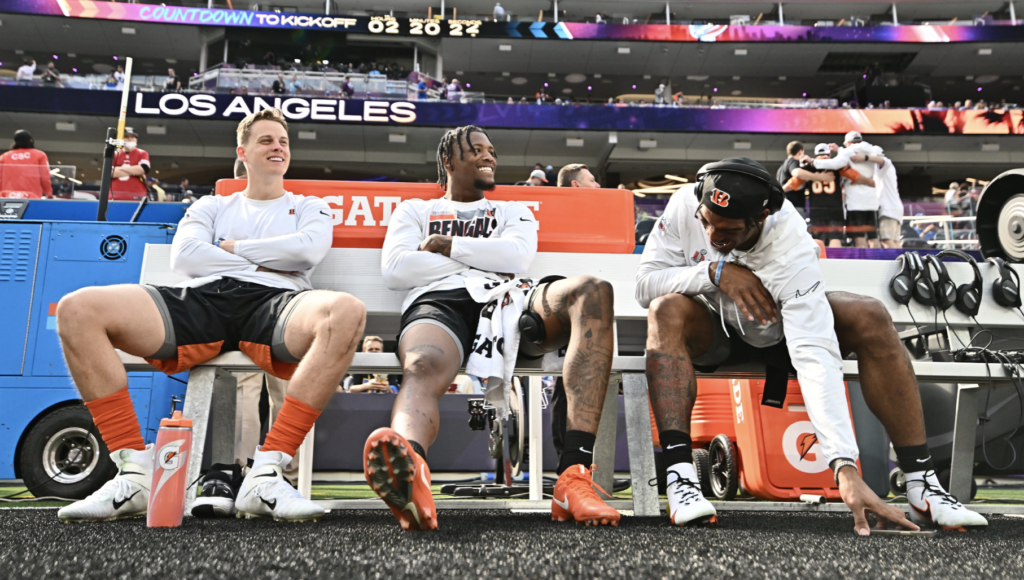 CINCINNATI – The NFL crazy season will soon be upon us.

The Bengals will be entering free agency on March 16 at 4 p.m. ET, with several key personnel questions to answer as they try to tweak a roster that came within 85 seconds of their first Super Bowl championship.

How will they go about strengthening an offensive line that yielded 70 sacks of Joe Burrow in 21 games? What will they do about the cornerback position opposite Chidobe Awuzie? How hard will they work to get Jessie Bates and his agent David Mulugheta to the bargaining table and get Bates out of his franchise tag to extend him?

Many salary sites such as OverTheCap.com had estimated the Bengals as having as much as $49 million in cap space for this season shortly after the Super Bowl. But those estimates can be somewhat deceiving.

After all the number crunching on various charges against the cap, such as player bonuses, dead money for players not on the roster and draft pick compensation estimates for the upcoming 2022 draft, the Bengals stand at just over $161 million in salary cap charges for 49 players under contract. This includes the $12.9 million franchise tag for Bates that came Monday.

Add in team projections for other charges including draft picks, player bonuses, practice squad commitments and 55-man rosters for game days and they were left with just $13.9 million, plus a $5.2 million carryover from 2021. This gives them roughly $19.2 million in cap space entering free agency. There are ways the Bengals could really get to work and increase that figure.

Another critically important note to consider is how contracts are calculated. The cap charge, which is what teams managed and the average annual value of a deal are two completely different things.

Simplifying here: A player could have an annual salary of $2 million but with a signing bonus paid upfront that could jump the cap charge significantly to many times that amount. The reverse is also true if a player has an annual contract of $4 million but agrees to take the bonus spread out, it could limit the cap charge a team has to pay.

It’s important to understand – from the Bengals perspective – that the salary cap story is not written in March. It is written at the end of the year when the results of the moves you made in the offseason are there for everyone to see – and judge. Like the draft, the Bengals are well aware that every football site known to man will grade the free agency work of different teams. The Bengals would rather be graded on their work in December.

Katie and Troy Blackburn, the two people most responsible for structuring and managing the cap are on the inside. They are the two people charged with handling the cap in such a way that puts the Bengals in a competitive position to make the best offers to the best players while staying within the NFL-mandated spending limits.

The No. 1 criticism of the Bengals over the years, of course, is that they’re cheap. They don’t spend to the cap. Those are snap judgements borne of frustration with a franchise that has had trouble winning playoff games until the past season and has had trouble sustaining success on the field. Remember when Carson Palmer was given a six-year extension worth $118.75 million during his 2005 run to the playoffs?

Image is one thing. Reality is something altogether different. Over the last eight years, the Bengals are No. 8 of 32 in average salary in the league.

Say what you will about the Bengals, they are generally regarded as one of the savviest handlers of the cap in the NFL. And one reason for this is that they’re always at the end of the spectrum when it comes to dead money or high-risk money in the future. The Bengals don’t kick the can down the road. They have just $3.4 million in dead money, with $2.75 of that belonging to the contract of Riley Reiff, who is not under contract for 2022.

That’s not to say they don’t sometimes miss the target. Last year, they thought they could sign a pair of impact defensive ends, but the market changed. They thought because the cap went down, pricing for defensive ends wouldn’t skyrocket. They wound up settling for just Trey Hendrickson at four years and $60 million, a top-of-the-market price tag for a player that certainly proved his worth. They adjusted quite well in the draft, selecting Joseph Ossai and Cam Sample, and plugging in Khalid Kareem, who was selected in the 2020 draft.

The defensive line was a big reason for the Bengals success last year. The payroll shows it as roughly 20 percent ($40 million) of this year’s cap number is taken up by D-linemen. Will they bring back BJ Hill or Larry Ogunjobi? That’s something to consider.

In addition, the Bengals thought they could get better value out of signing Chido Awuzie at three years at $21.5 million than William Jackson III, who left the Bengals and signed for three-years at $40.5 million. Safe to say, they hit the value jackpot there. They plugged in Eli Apple (1yr/$1.2 million) and Mike Hilton (4yrs/$24 million) at reasonable numbers to complement Awuzie and safeties Bates and Vonn Bell. So, instead of Jackson at an average annual value of $13.4 million, they got three corners at an APY of $14 million.

The Bengals know it’s not always about signing the very best player. It’s signing the most players at the best value. That’s where the Bengals hit the sweet spot last season. They also have the reputation of playing this game very well over the years.

But with Bates and Burrow it’s going to be different. The Bengals know this. They are – and always have been – willing to pay out more for players they already know work in their system and are leaders in the locker room. Bates and Burrow certainly fall into that category.

Bates is just 25 and will be among the highest-paid safeties in the game. Right now, the Bengals are likely budgeting around 60 million over four years for Bates and that number will rise some based on their cap projections. By market comparison, Jamal Adams got $17.5 million APY on his deal while Harrison Smith received $16 million. Justin Simmons came in at $15.25 million. Four years would be a sweet spot on this deal and assure the Bengals have him in the prime of his career.

How much do they value the leadership on and off the field? That will likely depend on how much they have left after the first push through free agency.

But understand this: The team will not spend beyond the highest value (skill + leadership) they place on Bates. This is why you use the franchise tag to give yourself time to see where the market sets after Tyrann Mathieu and Marcus Maye.

Then there’s Joe Burrow. The working assumption is that they’re going to offer Burrow a contract very similar to Patrick Mahomes 10-year, $450 million deal that was signed after Mahomes third season in the NFL, a season that ended with a Super Bowl win over the 49ers. For Burrow, he becomes eligible for that deal the day after completing his third season. The Bengals may very well do that, if Burrow is amenable.

Even if the Bengals extend Bates and Burrow at top-of-the-market prices, they’re not going to structure deals in ways that artificially push dollars into the future. They are indeed running some models that assume paying their elite offensive players like Burrow, Ja’Marr Chase and Tee Higgins.

But they insist they’re not going to sacrifice competitiveness in 2022 for the sake of getting a massive Burrow deal done. The Bengals have every intention spending to the $208 million figure this season to finish the job in Arizona next February.