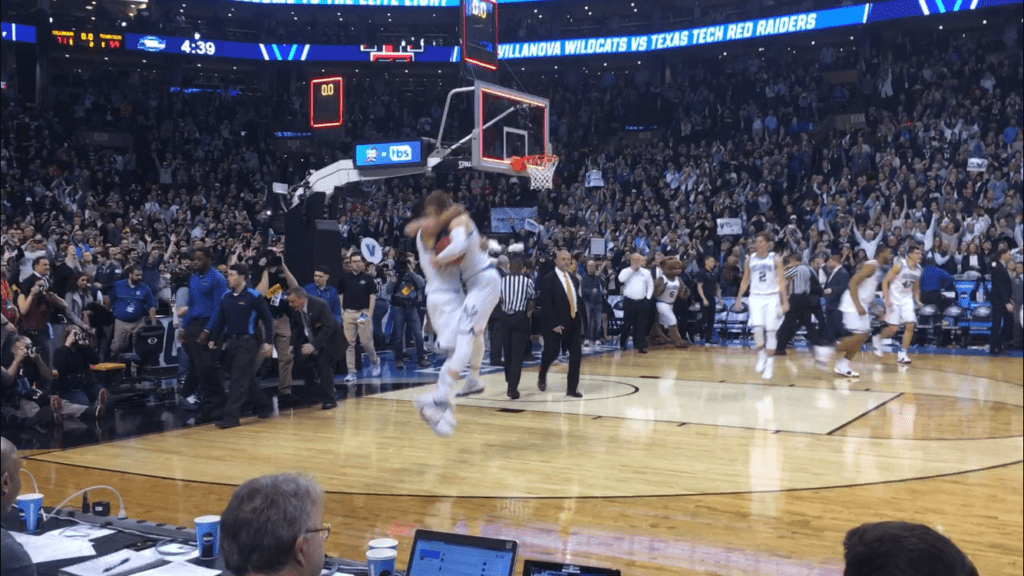 BOSTON — It wasn’t pretty but Villanova is headed back to the Final Four for the second time in three years.

While it wasn’t the dramatic last-second layup by Scottie Reynolds of 2009, Villanova repeated their East magic at TD Garden on Sunday with a 71-59 hard-fought win over the determined Red Raiders of Texas Tech in Boston. No. 1 seed Villanova (34-4), advances to play Kansas, an overtime winner in the Midwest Final, next Saturday in San Antonio.

Villanova won the game despite making just 4-of-24 shots from beyond the arc. But that was more than off-set by their dominating effort on the glass. They outrebounded Texas Tech, 51-33, including 20 offensive rebounds.

Villanova was led by Jalen Brunson, who scored a game-high 15 points and led five Wildcats in double figures. Brunson finished with 42 points in the two games in Boston and was voted East Regional most valuable player. Eric Paschall was a beast for the Wildcats in the middle, scoring 12 but hauling down 14 rebounds. Texas Tech was paced by Keenan Evans, who scored 12. For a full boxscore, click here.

Texas Tech, making their first-ever appearance in the Elite Eight, came out fast, scoring the first seven points. The 7-0 hole was the biggest the Wildcats faced in the tournament.

Villanova, unlike Friday night, came out ice cold, missing their first three shots and the first free throw attempt by Jalen Brunson before his free throw with 17:22 left in the half put the No. 1 seed on the board.

The Red Raiders assumed a 9-1 lead before the Wildcats finally woke up.

Friday’s hero, Omari Spellman, drained his first shot of the game, a three from the left wing and Villanova started to gain some rhythm. His six-point spurt early keyed a 20-6 Villanova run. It was Tech that went ice-cold in the final 17 minutes. After scoring nine points in three minutes, the Red Raiders scored just 14 in the final 17 minutes, finishing the first half just 9-of-27 from the field and 1-for-10 from beyond the arc.

Even as Villanova starters Mikal Bridges and Omari Spellman picked up two fouls each in the first 14 minutes, the Wildcats managed to build their lead to double figures late in the first half. Donte DiVincenzo completed a three-point play with 55 seconds left to build the lead to 34-23.

The only thing keeping the Red Raiders close was Villanova’s misses at the free throw line. Still, Brunson hit a pair with 27.9 seconds left for a 36-23 advantage. Villanova nearly had a put-back dunk at the buzzer but it went in and out.

As Villanova scored the first basket of the half, Texas Tech responded with authority on a Zhaire Smith slam.

Spellman picked up his third foul with 17:07 left in the second half. But Spellman returned moments later as Wright looked to exert more of a physical presence in the paint. It worked, as Spellman worked a slip-screen perfectly and took a pass from Brunson for the dunk.

Villanova’s inability to hit a 3-pointer or finish around the basket kept the Wildcats from pulling away. On consecutive trips, Nova missed point-blank chances around the rim. But Texas Tech was having even more trouble finishing their lay-up and put-back chances.

A lot of substituting around the 11-minute mark, as Wright went with offensive and defensive combinations early.

With the Villanova lead under double figures, DiVincenzo’s came up with a dunk with 10:24 left.

Davide Moretti’s three with 7:28 left cut it to 50-42. That three set the stage for a frantic final seven minutes.

Bridges came back with a layup to re-establish a 10-point lead. With 6:44 remaining, Norense Odiase tipped in a put-back and it was 52-44 Villanova. Moments later, Spellman picked up his fourth foul on a DiVincenzo missed three, Villanova’s 17th miss in 21 attempts from beyond the arc.

“It means a lot to us. Just to know that we could tough a game out like that,” Paschall said. “They’re a very talented team. Their defense is great. They have some talented offensive players. Just to be able to do that with my brothers out there is, again, a blessing. We worked hard all year. We did a great job of it, and we just kept getting better. So it shows that we can fight through a lot. We keep playing for each other.”

“I’ve learned a lot from these guys, this group, because we were not a good defensive team for most of the year,” Villanova coach Jay Wright said. “I really questioned, I thought, all right, maybe — actually, some things we didn’t do well as a staff early with this team that we normally do, and at some point we say, hey, we’ve got to go back to the basics defensively, and these guys really bought in.

“That’s kind of what Eric was talking about. We were afraid we might run out of time. We had to keep practicing to get better defensively and rebounding-wise. And it’s specifically gratifying to see 33 percent and outrebounding them in the biggest game so far. That’s truly gratifying.”

Brandone Francis connected on a three with 6:04 left to cut the Nova lead down to five, 52-47. A Phil Booth layup with 5:16 made it seven again but another huge put-back dunk from DiVincenzo with 4:28 put the lead back to seven.

Tech continued the fouling game, but Villanova continued to make them. DiVincenzo connected on a pair with 59.5 for a 67-57 lead. A missed three and Tech foul led to two more free throws by Bridges with 50.9 seconds left and it was 69-57 Villanova.