W2L4: Bengals Backups Time To Shine In Tune-Up For Playoffs

Starting with quarterback Brandon Allen, reserves get a chance to put their best foot forward before playoffs. 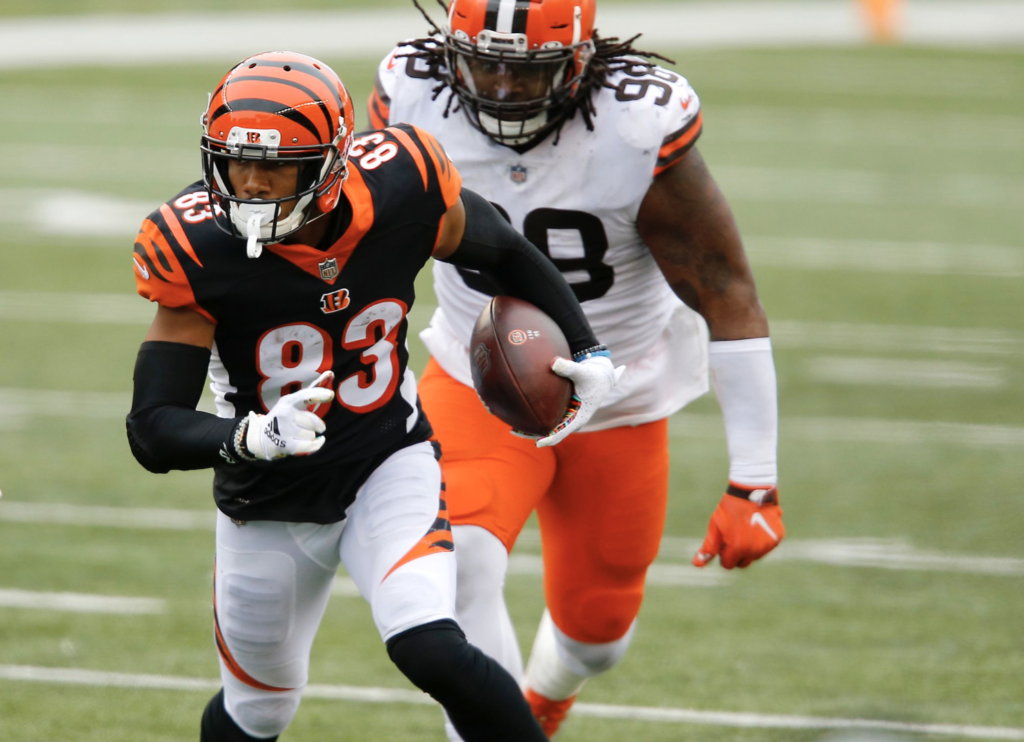 CINCINNATI – The final game of the 2021 regular season takes place nine days into the 2022 calendar. It’s a game that will – barring a miraculous string of events – result in the real bye week for key Bengals including their MVP-caliber quarterback Joe Burrow.

With Joe Burrow resting up for the playoffs, the Bengals will turn to quarterback Brandon Allen with a chance to at least wrap up a No. 2 seed in the upcoming playoffs, and the guarantee of two home playoff games as long as they advance past the first round.

For the Bengals to clinch a No. 2 seed, they must win and the Titans must lose to the Texans on the road, and the Bills must beat the Jets in Buffalo. With Kansas City’s win Saturday in Denver, the Bengals cannot secure the No. 1 seed and are assured of playing next week in Super Wild Card Weekend. They will play Saturday, Sunday or Monday night of next weekend at Paul Brown Stadium.

If the Bengals, Titans and Bills win, Cincinnati will be the No. 3 seed behind the Titans and Chiefs, who would be seeded 1 and 2, respectively. In that scenario, they would play the No. 6 seed, which would be the Colts, if they defeat the Jaguars in Jacksonville.

If the Bengals lose and they finish as the No. 4 seed, they would host the No. 5 seed, which would be the Patriots, if the Bills defeat the Jets.

So, even with the Chiefs’ win Saturday, to simply say there’s nothing at stake is not accurate. It’s just the Bengals are making a conscious decision to not put any of their key starters in harm’s way, with perhaps the notable exception of Ja’Marr Chase and Tyler Boyd.

Glad we mic'd up @JoeyB for this one. Enjoy!

Chase is 11 receiving yards shy of matching Chad Johnson’s team record of 1,440 yards in 2007. While Chase’s milestone is easily attainable with one intermediate route grab, Boyd’s would take some serious doing. Brandon Allen would really have to target Boyd a lot and Boyd would have to be exposed to much more risk than the Bengals would presumably accept to one of the game’s elite slot receivers.

Boyd is 172 receiving yards shy of joining teammates Ja’Marr Chase and Tee Higgins in the 1,000-yard club this season. Chase (1429) and Higgins (1091) have already hit the mark, and stand as the first duo in NFL history to post 1000 receiving yards in the same season before the age of 23. Looking to join them is the 27-year-old Boyd, who at 828 yards stands just 172 shy of his third career 1000-yard season.

The Bengals, of course, are coming off of a thrilling 34-31 win over Kansas City last Sunday that clinched the Bengals’ first AFC North title since 2015, and also snapped an eight-game winning streak by the two-time defending AFC Champion Chiefs.

After the game, Bengals head coach Zac Taylor fought back tears at his news conference.
“Really proud,” he said. “You guys (the media) have sat in here and seen what we’ve been through.

“You don’t want a playoff berth or a division championship to be handed to you — that’s something you go take yourself. So we wanted to go do it with a victory. And our guys did that in unbelievable fashion today. It took everybody — some guys just got here, and some guys have been here two, three, five, 10 years. There’s a lot of earned emotion in that locker room.”

Burrow, who was seen limping to the sideline in the game’s final moments, said he re-aggravated an injury to his right knee from earlier this season.

Asked after the game how his right knee felt, Burrow didn’t seem worried. “Good enough. I would have come back in (for an overtime period). I just knew we were going to kneel it in the pocket, so I figured to take myself out of the risk and let Brandon go in there and do that.” The Bengals obviously wouldn’t expose that this week, healthy or not, heading into the playoffs.

Burrow won AFC Offensive Player of the Week for his Week 16 performance against Baltimore, which included a team-record 525 passing yards and four TDs. He followed that with 446 yards against the Chiefs — fourth-most in team history — giving him the second-highest two-week passing yardage total (971) in NFL history (Dak Prescott, 974 in 2020).

Go inside the locker room after we won the AFC North. pic.twitter.com/x9ZY6801qE

Since beating the Bengals, 41-16, on Nov. 7 at Paul Brown Stadium to improve to 5-4, the Browns have lost five-of-seven, including three straight, to drop out of playoff contention. This game figures to be a far cry from the last time these two teams met in Cleveland. The 35-30 game was won by the Browns before a national TV audience on Thursday Night Football to open Week 2 of the 2020 season. Burrow was 37-of-61 for 316 yards and three touchdowns while Baker Mayfield was 16-of-23 for 219 yards and two touchdowns. Neither will play in this game at FirstEnergy Stadium.

When the Bengals have the ball:
Brandon Allen: The 29-year-old quarterback is making his ninth career start, sixth with the Bengals. He is starting an NFL game for the first time since the 2020 season finale against the Ravens at Paul Brown Stadium, when he was just 6-for-21 for 48 yards and two interceptions in a 38-3 loss. But the week before, his last road start in the NFL, was quite different. He had a career day, completing 29-of-37 passes for 371 yards and two touchdowns in a 37-31 win over the Texans. Allen came on at a critical time in the division-clincher against the Chiefs last week, as he took two snaps after Burrow took himself out with a sore right knee. Allen downed the ball once and clocked the ball with two seconds left to give Evan McPherson the chance to win the game and the division with the 20-yard field goal.

Reserve action: Once the team receiving milestone is reached for Ja’Marr Chase, this figures to be a game for the reserves. How well can Samaje Perine and Trayveon Williams run the ball behind an offensive line that will be without Quinton Spain, Trey Hopkins and likely others? Get ready for Brandon Allen to Trenton Irwin, Trent Taylor, Stanley Morgan and Mike Thomas. Joe Mixon, Spain and Hopkins are all out having entered COVID protocols earlier in the week. Jake Browning will serve as Brandon Allen’s backup, as he was one of eight practice squad promotions on Saturday.

Case Keenum: The 33-year-old Keenum makes his second start of the season for the Browns. He was 21-of-33 for 199 yards and a touchdown in a 17-14 win over the Broncos on Oct. 21 in Cleveland. Keenum is starting for Baker Mayfield, who was placed on season-ending injured reserve following the loss to the Steelers on Monday night. Mayfield completed just 16-of-38 passes and was dealing with a sore left shoulder for most of the season.

It’s very possible and likely that rookie Evan McPherson gets the day off to rest his sore right groin which he said was a bit stiff during last week’s win over Kansas City. Elliott Fry was promoted to the active roster from the practice squad Saturday. The 27-year-old saw action just two weeks ago for the Chiefs when he filled in for Harrison Butker and went 3-for-4 in field goals and 3-for-4 on extra points in KC’s 36-10 win over the Steelers. He was 1-for-1 in 2020 for Atlanta, converting a 23-yard field goal and made 1-of-2 extra points.

Kevin Huber enters the final week 12th in the NFL in net punting average at 41.2 yards.

Dustin Colquitt has split time with Jamie Gillan this season. Colquitt has punted just 21 times for a net average of 36.4 yards. He had two inside the 20 last Monday night in Pittsburgh.

Brandon Allen has the chance to outshine Case Keenum and could if some of the starters are left in the game for at least the first quarter. Both teams will want to grind this game out quickly and end the regular season without drama. For the Bengals, that means getting out with no significant injuries, period. A win, and it’s an 11-6 regular season heading into the playoffs, and maybe, just maybe a No. 2 seed. The Bengals would also like to atone for the 41-16 loss to Browns on Nov. 7 at Paul Brown Stadium and finish 5-1 in the AFC North.