Bengals get their second chance to test their reserves, and their first - and only - on the road. 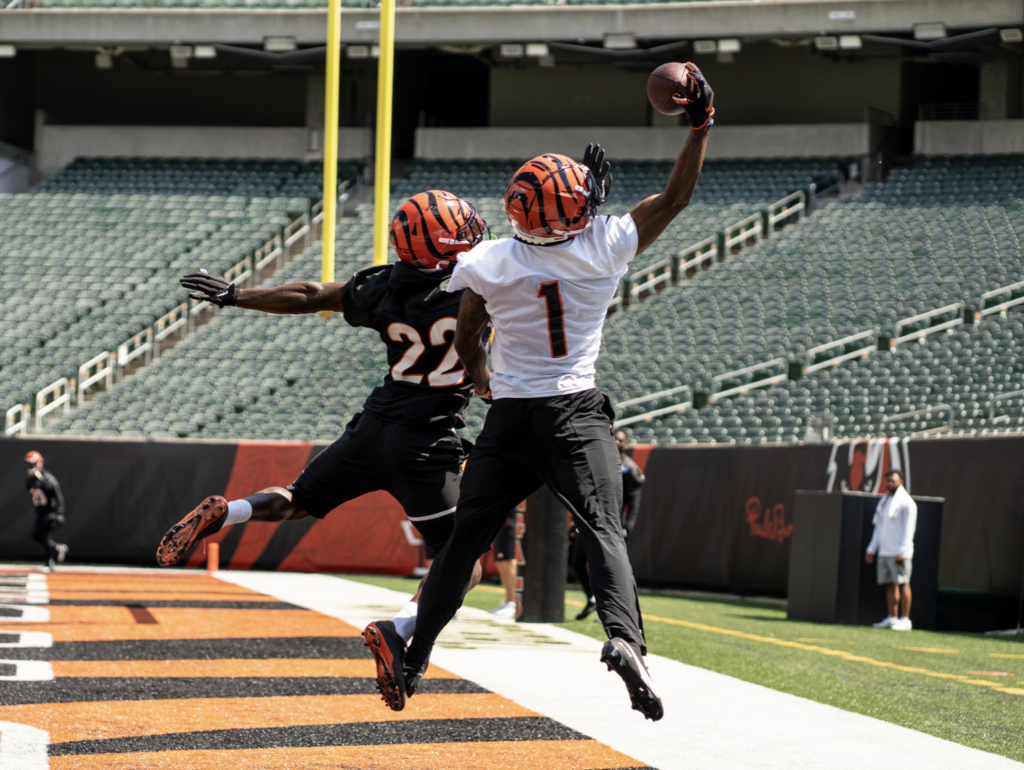 CINCINNATI – The Bengals are keeping their collective fingers crossed for Sunday night.

The Bengals have had their offensive line depleted heading into their second preseason game, losing Isaiah Prince to a biceps injury on Thursday. He was declared “week-to-week” on Friday by head coach Zac Taylor.

Right tackle La’el Collins was back at practice in a walkthrough on Friday but will not play Sunday night, along with left tackle Jonah Williams, center Ted Karras and right guard Alex Cappa.

The Bengals had just three tackles suit up Friday that will be available to play Sunday night: Hakeem Adeniji, Devin Cochran and D’Ante Smith, who is coming back from a back ailment.

The Bengals did sign a guard on Friday when they added Nathan Gillam to the mix out of Wake Forest.

Trey Hill will get reps behind Cordell Volson at left guard and if things go well for Volson, he could find himself on the inside track to starting Sept. 11 against the Steelers.

Friday’s walkthrough featured lots of quality reps in the red zone for Joe Burrow and Brandon Allen. Burrow will not play Sunday night but looks to get on the field against the Rams Wednesday and Thursday for the two joint practices but is not expected to play in the Saturday, Aug. 27 preseason finale.

Eli Apple with the terrific PBU on pass for Ja'Marr Chase in end zone. pic.twitter.com/eWiPoAxdoi

The biggest development Friday was Collins returning to the field.

A very frank and enlightening La'el Collins happy to back in 11-on-11s Friday. #RuleTheJungle pic.twitter.com/bzf44r7VXx

Cordell Volson: The rookie out of North Dakota State gets his first start after playing the second half against Arizona. If things go well – or he at least keeps his head above water – he could be closing in on winning the starting left guard spot, with Jackson Carman struggling last week and landing on the COVID list this week. Zac Taylor says more than anything he’s looking for “cohesion” along the offense line as the regular season approaches.

Tyler Shelvin: The second-year defensive tackle gets more snaps Sunday night to prove he can handle himself in the trenches.

Bounce Back: Rookies Allan George and Delonte Hood will get more reps Sunday night as will Dax Hill and Tycen Anderson. Tre Flowers was held out Friday as a precaution but he is expected to start at one outside corner position.

This is another big game for the offensive line. They are playing a game of survival at this point. Bodies are dropping and evaluations still have to be made. Can the Bengals really go with Hakeem Adeniji at right tackle if La’el Collins isn’t fully ready for Sept. 11? Or will Duke Tobin be forced to go out and trade for a tackle to help with depth?

This could be another big game for Evan McPherson. Getting him kicks outdoors in the elements of MetLife Stadium, albeit summertime, is still good training.