W2L4: Bengals Only Fighting For Roster Spots Against Rams

With Thursday's three-round fight out of the way, time for reserves to fight for spots on roster and practice squad. 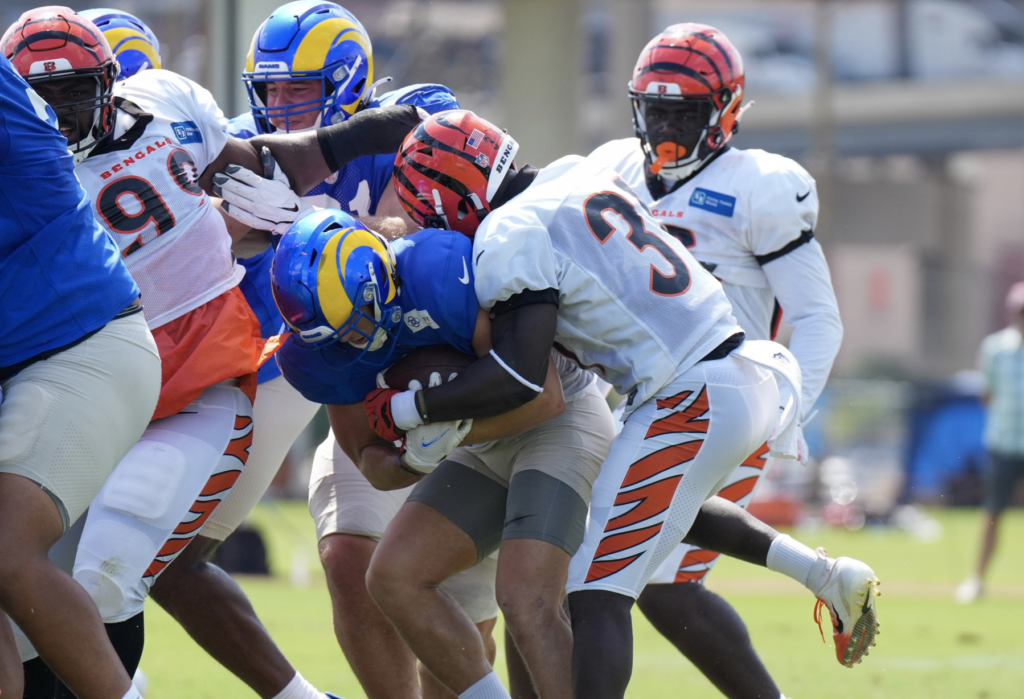 CINCINNATI – Saturday night was supposed to be just a little preseason tuneup and rematch of Super Bowl LVI won by the Rams six months earlier.

Thursday’s fracas involving Aaron Donald that ended the second joint practice prematurely changed the tenor of that quite a bit.

Of course, Donald and almost every starter involved in the three-round tilt on the Kettering Health practice fields won’t even suit up Saturday, let alone play. But the imagery of the league’s best and most dominant defensive player grabbing two Bengals helmets and playing wac-a-mole with them then posing with them like a medieval warrior afterward is not a becoming look.

He won’t be suspended by the NFL. But surely the Bengals can’t be pleased with what they saw on film. Nor can they be pleased with their own right tackle La’el Collins ended a massively underwhelming day in the trenches by getting into a fist fight with linebacker Leonard Floyd in two other skirmishes and tossing away Floyd’s helmet in the altercation that prompted Donald’s tantrum that ended with a thud of his own and a tumble to the turf.

The fact that Bengals coach Zac Taylor and Rams coach Sean McVay are good friends and have worked professionally together mitigates a lot of the hard feelings.

Both insisted Thursday that good work was accomplished before the meltdown and it was a good two days of prep for Saturday’s game. Specifically, it was valuable to the Bengals because they got their offensive and defensive starters some real competitive reps against the defending Super Bowl champs and were reminded of the intensity level needed to make a return.

Saturday will no doubt be a match up of backups fighting for final spots on the 53-man roster.

Here are a few for the Bengals that bear very close watching:

This has been the most competitive and deepest battle in camp. Kendric Pryor and Kwamie Lassiter II have shown flashes of talent that at least are worthy of consideration to push Trent Taylor for the backup slot/punt returner gig. Unlikely as it may be, Pryor and Lassiter have the chance to win a spot. The likely scenario here is the Bengals keep the known commodity in Taylor and try to sneak Pryor or Lassiter or both through deadline waivers and sign them to the practice squad. There’s also the chance the Bengals keep seven receivers and only two active tight ends, but only if they feel there’s a chance either Lassiter or Pryor would get scooped up if they don’t protect them and they are insistent on keeping them. This is precisely why NFL rosters change often after Week 1 when teams have the opportunity to place players on IR with a chance to return later in the season.

It’s been the most hyped offensive line battle in recent memory and Cordell Volson has taken the lead with a very solid second half against Arizona, a week of first team reps last week, playing the entire game against the Giants last week and first team reps in joint practice this week, including standing up competitively to Donald in practice. He should get a first half of action this week to seal the deal. If Volson doesn’t play at all, and Jackson Carman and Trey Hill get all the reps, then you know the decision has been made and Volson will start opening day Sept. 11 against Pittsburgh.

Right there with the sixth receiver spot, this has been a competitive battle as well. Second-year punter Drue Chrisman and 14-year veteran Kevin Huber are battling it out. Huber, with one more game, will set the new all-time games played record in Bengals history. Chrisman has exhibited the stronger leg as special teams coordinator Darrin Simmons acknowledged Thursday but Huber still has the keener directional and hang-time skills. Simmons said the two will alternate against the Rams and then it will come down to a tough decision.

“I still got about five days. I think it’s rounding into shape,” Simmons said.”I just gotta try to decide what we want and exactly what we’re willing to stomach versus what we know.

“Right now, Drue is a power punter and he’s really getting the ball downfield for us. We need to continue to work on the line and accuracy that he takes. I think it’s a developable skill. Over time that can be developed.”

Last year, Simmons said Huber had a clear advantage as the superior holder. That advantage has disappeared as both have been very clean in their holds for Evan McPherson in camp and the preseason. It comes down to strength, direction and hang time.

This is it for Tyler Shelvin. If a player plays most or all of a preseason finale, that’s usually a sign that his days are numbered. Shelvin, a fourth pick in 2021, has been given every chance to prove he’s got the fire to make this roster. His performance hasn’t jumped off the page enough to make coaches make a spot for him on the initial 53-man. The good news for Shelvin is that he likely will be welcomed back to the practice squad if no one claims him, simply to have a known commodity in the system if one of the starters goes down in the season. Shelvin is battling Domenique Davis and Tariquious Tisdale for that fifth and final spot, if the Bengals decide to keep five defensive tackles. They could take four into the season and juggle/add later.

While the assumption is that Brandon Allen has this spot secured, Jake Browning looked good against Arizona and better against the Giants, leading a late touchdown drive that put the Bengals up, 22-18, last Sunday at MetLife. Both are expected to see time against the Rams, though if Browning plays most of the game and Allen is done in the first quarter, that’s probably an indication that Allen will again be Joe Burrow’s backup heading into his third season. After sustaining a concussion against Arizona and playing just one series, Allen and the offense struggled in the first half against the Giants before he led a touchdown drive to open the second half. Allen is 17-of-23 for 134 yards but only a long of 18 yards. But his completion percentage of 73.9 is what you’re looking for from a backup. Browning is 57.5.

With Jessie Bates back and Dax Hill looking very good, this would appear the time to get Michael Thomas more reps, along with Trayvon Henderson, Tycen Anderson. Bates and Vonn Bell definitely won’t play. With depth on corner an issue, wouldn’t be a shock to see Hill get some reps inside and outside as a corner on the line of scrimmage.

Eli Apple is out with a quad issue and Chido Awuzie and Mike Hilton will definitely rest. Expect to see more of Jalen Davis, Tre Flowers, Allan George, Delonte Hood and Javaris Davis.

Games like this are the ones for teams with Super Bowl aspirations to see who they really want to bring back on their practice squad at key places of depth. That’s why it’s big for the two undrafted free agent wide receivers. It’s big for the likes of Keandre Jones and defensive backs Allan George and Delonte Hood.

And if Evan McPherson sees someone coming at him on a kick, duck and move. There is zero reason to risk injury to one of your most important weapons.