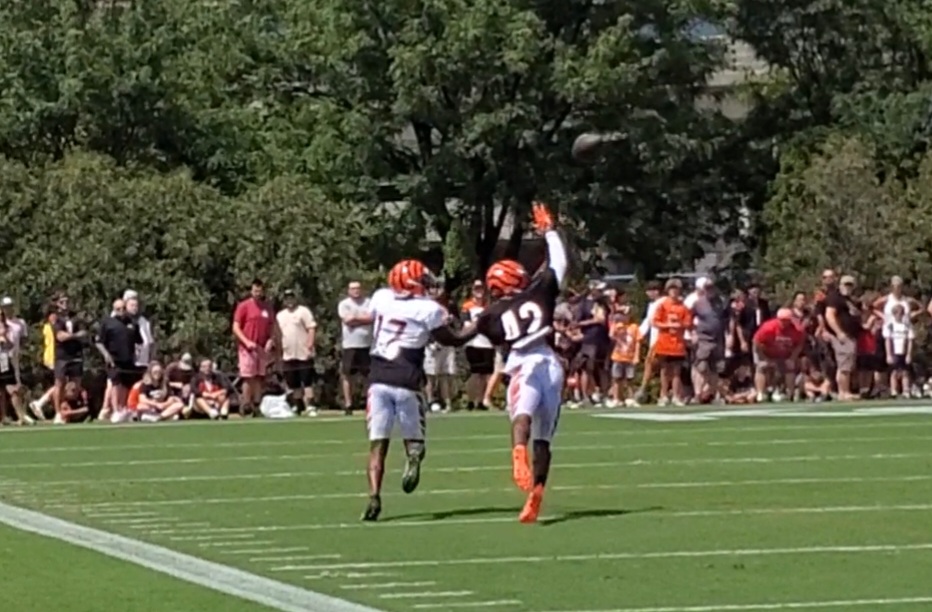 CINCINNATI – Nearly six months to the day they came up just 85 seconds short of their first Vince Lombardi Trophy, the Cincinnati Bengals begin anew with their preseason opener against the Arizona Cardinals in the freshly minted Paycor Stadium, known formerly as Paul Brown Stadium.

The Bengals will not be playing any of their regulars in this game, with the notable exception of starting left guard Jackson Carman, who has been given the job to open spring practice and training came. Now, starting with this game, the second-year lineman out of Clemson via Fairfield High School needs to start rewarding the faith the coaching staff has placed in him.

Obviously, Joe Burrow continues to heal from his July 26 appendectomy and will not be playing in the game. Head coach Zac Taylor continues to refrain from placing any timetable on his return to practice or whether he will play in the preseason.

Also sitting out of this game will be all the regulars along the starting offensive line, the starting wide receivers named Ja’Marr Chase, Tyler Boyd and Tee Higgins. Don’t expect to see Hayden Hurst or Joe Mixon.

The same can be said on the defensive side of the ball, where second-year edge rusher Joseph Ossai will see limited snaps but is expected to play and get his game conditioning ready for Sept. 11. Ossai is a fascinating case because the Bengals coaches desperately want to see what he can do and the load he can take but they’re also aware of what he went through in the preseason opener last year, the last (and only) time he played in an NFL game.

“We have to manage him on our end,” Taylor said Wednesday. “He won’t play as much as maybe some of the younger guys do. He’s gonna need a lot of work over the course of this preseason just because he hasn’t played ball in a long time. But we’ve been encouraged by what we’ve seen out there at practice. We get a chance to manage him in practice. We’ll manage him during the game. But again, he’s a guy that we’re certainly counting on, so we’ll manage him the right way over the course of these three preseason games.”

This figures to be the first of three significant game battles in the punting competition between second-year booter Drue Chrisman and 14-year veteran Kevin Huber. Chrisman has appeared to gain a bit of a lead this week in practice, getting off several high-hanging kicks while Huber just hasn’t been able to match Chrisman’s strength. Huber is still one of the best holders in the game, no small detail when considering how much emphasis is placed on the kicking game with the weapon that is Evan McPherson.

The same can be said of rookie long snapper Cal Adomitis and veteran Clark Harris, both of whom Taylor said will get reps on Friday.

Brandon Allen/Jake Browning/Drew Plitt: Zac Taylor said he anticipates Allen getting the first half snaps and Browning the second. Allen looked notably better Wednesday, firing three completions to Ja’Marr Chase and a TD strike on a deep slant to Mike Thomas. If for any reason Joe Burrow can’t go Sept. 11, now would be a good time for him to show he can handle the offense. Browning spent 2019-20 with Mike Zimmer’s Vikings before being picked up by the Bengals and landing on the practice squad before last season.

“It’s exciting for him,” Taylor said of Browning. “He played a little bit in Minnesota last year so it’ll be fun to watch him in action. He’s always performed at a high level at (University of) Washington. He threw for 250 touchdowns in high school, 250. Ninety-six one year. So these are things I love to know. When I was in high school, I was always researching what all the records were. I think I fell 220 touchdowns short of breaking the all-time national record. He’s played a lot of ball.

“Brandon Allen has played a lot of ball in his life, Jake Browning. Those are guys were multi-year starters at major programs. We value that because there’s experience you can draw from that. So it’s exciting to see them get in games and operate because they’ve got a lot of experience operating and getting a group to be cohesive. Those two guys aren’t the most physically imposing, challenging guys. But I love the nuances of their games and they understand the different types of balls you’ve got to throw to different types of receivers on different plays and how to manage the offense. So, it’s always really fun for me to see guys like that operate in preseason and see where all that experience comes into play for them. So, we’ll see on Friday night.”

Kwamie Lassiter II: The rookie out of Kansas should have a good chance to shine on special teams and in the receiving game, just like he has so far in camp.

Jackson Carman: Don’t just watch the physical battle, watch to make sure he isn’t committing false starts or making mental errors. The coaching staff is just as concerned about this as they are the physical, maybe more so because they know his strength is there.

Cordell Volson: The rookie out of North Dakota State gets his first game reps competing behind Carman at left guard.

A.J. Green: He likely won’t see any action but it is a return to the stadium he once called his professional home. Green is in his second season with Arizona following a record-breaking 10-year run with the Bengals. Green was asked if he has any emotions going back to Cincinnati for Friday’s game.

“I don’t. I really don’t. I played 10 seasons there (and) had a great time,” Green said. “I’ve still got really close friends who were a part of that organization. It’s good to get to go back and see them. But there are no emotions right now.”

Cardinals QB Kyler Murray won’t play. Instead Trace McSorley will get the call.

A player that is expected to see a lot of playing time is former Cincinnati Bearcats linebacker Myjai Sanders, just 225 days after playing for the Bearcats in the national semifinal against Alabama on Dec. 31.

Dax Hill: All eyes will be on this safety out of Michigan to see how well he fares calling defenses and how he flies all around the secondary making plays. With no Jessie Bates, Hill has been ordained the guy to take his spot and the Bengals haven’t hesitated in giving him a shot. So far in camp, he’s justified that confidence.

Cam Taylor-Britt: After a rough start, CTB has come on strong and is making play after play and staying on his man in tight coverage when press man is call for.

Delonte Hood and Allan George: Both rookies have made plays in the secondary throughout camp. Hood ended practice with an athletic pick in the first week to end practice while George had a couple of very good deflections on Wednesday. This is a close battle to watch for a pair of DBs who could wind up on the practice squad.

This is a big game for the rookies and second-year players looking to make a statement. Jackson Carman, Joseph Ossai and defensive tackle Tyler Shelvin are at the top of that list, particularly Shelvin. He has had an up-and-down camp so far and needs to show some highly competitive reps starting with this game and continuing through preseason if he is to find a way onto the 53-man roster. Whether rookie draft pick or unsigned free agent, Friday is a chance to start showing they can process the speed of the NFL game.

“I don’t really look at (UDFA) differently than the draft picks,” Taylor told me Wednesday. “It’s just guys that are all here on the roster and they’ve all earned the opportunities that they’re going to get on Friday. So excited to see them all. There’s a strong history here of Duke and his crew doing a great job of bringing in undrafted free agents that can come in here and compete for roster spots or initially make the practice squad and then be here years later. Stanley Morgan’s a great example of that. Alex Erickson, I mean, the list goes on and on. Trey Hopkins. There’s so many guys here who’ve had an impact on what’s happened well before I ever came here. And so, it’s exciting to see who in that group this year can step up and be that Stanley Morgan in whatever position group it is. I think we’ve got a good group of guys that will be fun to evaluate.”