W2L4: Best Yet To Come As Bengals Set Sights On Titans In AFC Divisional Showdown 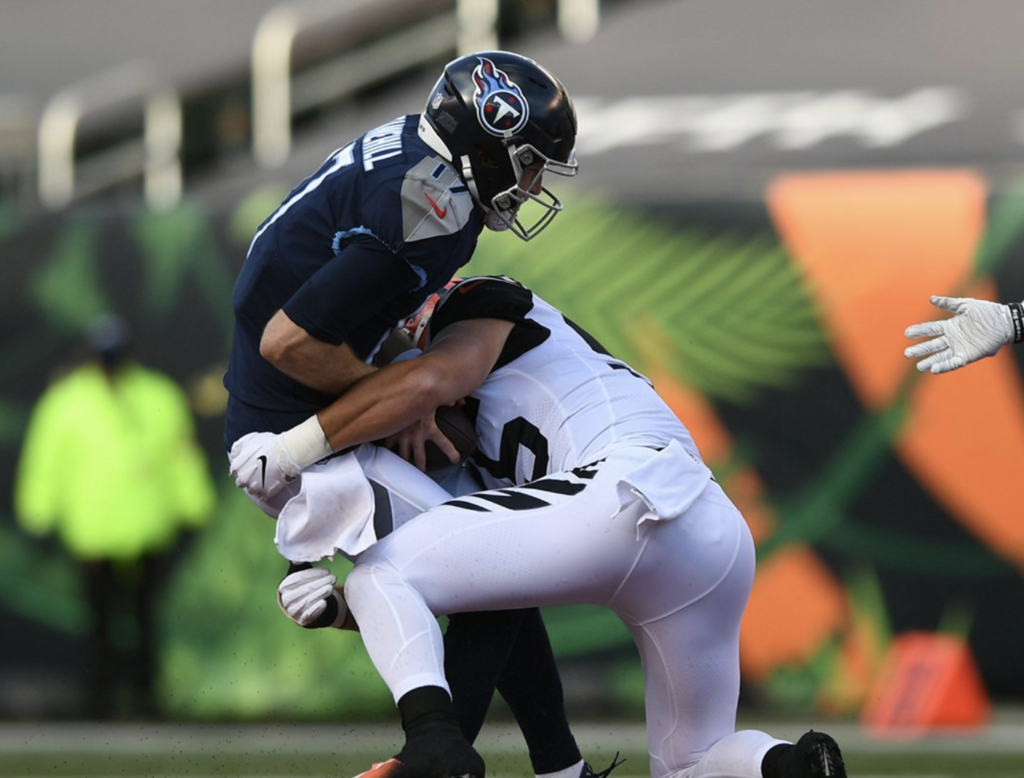 Logan Wilson had his first career sack against Ryan Tannehill and the Titans in a 31-20 win in Oct. 2020 at Paul Brown Stadium.
Share
Facebook Twitter Email

CINCINNATI — One box checked, another to go.

The Bengals ended their 31-year drought with a 26-19 wild card win over the Raiders at Paul Brown Stadium, a win that also ended Mike Mayock’s three-year run as general manager in Las Vegas.

This Saturday, the Bengals are on the prowl to bring an end to another dubious streak. The franchise has never won a playoff game in nine tries outside the City of Cincinnati. They’ve lost all seven road playoff contests, most recently in Indianapolis in Jan. 2015 against the Colts.

This is the second time the Bengals are playing this franchise in the playoffs, having defeated the Houston Oilers in the much-ballyhooed 41-14 victory of Jan. 6, 1991 at Riverfront. The Oilers and Bengals were once fierce rivals in the AFC Central in the days of Paul Brown, Forrest Gregg, Sam Wyche, Bum Phillips, Jerry Glanville and Jack Pardee.

“We’re here to win. We don’t care about some theory I guess that everybody’s pretty much worried about,” Joe Mixon said of the playoff road bagel. “We know what we’ve got in front of us. We know what we have to do in order to get where we want to be. We’ve got the path laid out for us. At the same time, as we’ve been saying for these past, I don’t know how many weeks now, we control our own destiny and we’ve just got to keep on pushing, keep on getting better each and every week.”

Throw away the final game in Cleveland where practically every starter rested, the Bengals won five of their seven meaningful games on the road this season, losing only to the Bears in Week 2 and the Jets in the Halloween debacle.

Last Saturday was a beacon that the Bengals are charting a different course this postseason with an entirely different cast of characters.

Remember the last time the Bengals played the Titans? pic.twitter.com/frp9Lgf7ol

“Pay attention to the little details because things don’t matter until they matter. And we’ve got to figure out ways to play complete games. We have yet to do that. We’re definitely getting better, each side of the ball and also on special teams,” Mixon said. “But I feel like we’ve yet to play our best football and I think with these next couple of opportunities that we are able to have, I think we’re going to put it all together here shortly. Like I said, we’ll figure it out.”

That’s music to the ears of Mixon’s head coach.

“I think that’s what great about our players,” Zac Taylor said. “They understand we can always improve upon a lot of things. We obviously expect to score every time we get the ball and get stops on defense every time we don’t. So, I like to hear that from our players that we still haven’t played our best football. You’re obviously playing some very good teams right now and you’ve got to step up and our best is expected.

“I think our guys have had a great week of practice. They’re locked in and I’m ready to watch them play on Saturday.”

Most importantly, Taylor says his team has been getting progressively better since going into the bye after that 41-16 loss to the Browns at Paul Brown Stadium. The Bengals came out with the 32-13 win in Las Vegas and the 41-10 thumping of the Steelers. They lost to the Chargers and 49ers but then won three straight to claim the division. They’ve won six of nine since the bye, including the Cleveland loss in Week 18 where virtually every starter rested.

“We’re always chasing perfection, that perfect, complete game where you go out there and you win, 49-0, and you always make those corrections… I think that’s what the team has done,” Taylor told me Thursday. “We’re a much better team now than we were in Week 1. I feel we’ve been playing really good football since the bye, even though we haven’t won every game. There’s been a lot of really good things in those nine or so games since our bye. And really that’s all you can ask for as you get into the playoffs.

“We try to pride ourselves on going out there and being road warriors to be honest. We’ve been doing really good on the road against very good teams. We like to go out there, handle business and do whatever we can to always come out on top and I feel like we pretty much get prepared throughout the week to pretty much go out there and do that.”

Joe Burrow: In his first pro playoff game, the Bengals quarterback was deadly efficient, completing 24-of-34 for 244 yards and two touchdowns and a QB rating of 110.4. He played the entire second half with the lead and managed the game as such, not taking unnecessary risks. His best play was his most controversial, rolling out to his right late in the first half and throwing across his body, finding Tyler Boyd for a TD that put the Bengals up, 20-6. The Bengals could likely take advantage of a pass defense that was ranked 25th in the NFL this season in yards allowed 245 yards per game.

Joe Mixon: The running back could find it tough sledding against a defensive front that finished fifth in rushing defense, allowing just 84.5 yards per game this season. But Mixon and the offensive line need to do better than the 2.8 Mixon posted on Saturday against the Raiders. As a team, the Bengals ran 25 times for 83 yards and a long of 15, by Ja’Marr Chase.

Tee Higgins: Higgins was disappointed with himself last week, catching just one pass on four targets for 10 yards. The thing about Higgins is he rarely has two games like that back-to-back. With the Titans possibly helping Ja’Marr Chase’s high school and LSU teammate, and longtime friend Kristian Fulton in coverage, that could leave Higgins open to make some big plays, especially in the middle of the field. In 2020, without Chase, Higgins caught six passes on nine targets for 78 yards while Tyler Boyd had six catches on seven targets and a touchdown in the 31-20 win.

Jeffrey Simmons: The nose tackle might be the most dominating player on the field for Tennessee not named Derrick Henry. The first-round pick from 2019 anchors an impressive defensive line. The 6-foot-4, 305-pound tackle out of Mississippi State had 8.5 sacks this season and posted numbers that drew comparisons to the likes of Aaron Donald of the Rams. Simmons had 12 tackles for losses and 16 quarterback hits. The Bengals are going to have to account for him on every snap and the interior line must do whatever they can to make sure he doesn’t destroy the Bengals offense on every snap. This is why running the ball reasonably well is so critical to the Bengals.

Derrick Henry: The huge unknown is how much the Titans will lean on their star running back early on in this game. Henry has not played since he was placed on injured reserve following the team’s Oct. 31 contest at Indianapolis. On Jan. 5, he was designated for return, opening a 21-day window in which he can practice and ultimately return to the active roster if the team so chooses. Prior to his injury, the two-time NFL rushing champion rushed for 937 yards and 10 touchdowns on 219 carries, leading the league in each category through eight weeks. Even without Henry for much of the season, the Titans finished fifth in rushing offense in 2021 with an average of 141.4 yards per game. D’Onta Foreman led the team in rushing during Henry’s absence, totaling 566 rushing yards. Don’t sleep on Dontrell Hilliard. He rushed 56 times for 350 yards and a long of 68 yards that he took to the house. Ryan Tannehill is the team’s fourth-leading rusher with 270 yards on 55 carries and an impressive seven touchdowns.

Ryan Tannehill, the passer: The Titans passing game does have A.J. Brown and Julio Jones. But that’s not their bread and butter. Brown (at 6-1, 225 pounds) is a beast with 63 catches for 869 yards and five touchdowns. The receiver no one talks about but has impressive numbers is Nick Westbrook-Ikhine. He has 38 catches for 476 yards and four touchdowns. Then there’s the veteran Julio Jones, who may not strike fear like he once did but does have 31 catches for 434 yards.

Trey Hendrickson: The Bengals held their collective breath when Hendrickson left in the third quarter last Saturday with a concussion. He spent the next two days in protocol. When he was spotted on the practice field Tuesday it was good sign that he might be able to clear in time for the game. By Thursday, Zac Taylor pronounced him fit and ready to go. The leading Bengals pass rusher could be key on obvious passing downs Saturday.

Evan McPherson had a great playoff debut as a rookie kicker, converting all four field goals and two extra points in the 26-19 win over the Raiders. The task gets a little trickier on the natural grass of Nissan Stadium with temperatures dipping into the low 40s by kic

Kevin Huber punted just twice last Saturday, and the Bengals would be ecstatic to repeat that again this Saturday. He averaged 45 yards and then went out with his head coach and presented a game ball to delirious fans at Mount Lookout Tavern. Might have to wait a bit to get that second game ball out to the fans but no one would complain about a reprise of that visit.

Old friend Randy Bullock converted just 26-of-31 field goals this season for the Titans and missed three of 45 extra points. All five of Bullock’s field goal misfires were between 40-49 yards.

Brett Kern averages a net of only 40.4 yards but did spot 18 of his 47 punts inside the 20 this season. He tied for the NFL lead this season with just one touchback.

Getting Trey Hendrickson back from his concussion of Saturday cannot be overstated. He can be a game changer in terms of getting to Ryan Tannehill in obvious passing situations. Having Josh Tupou return from his knee injury suffered in Cleveland in Week 18 is also huge, considering the loss of Larry Ogunjobi. The Bengals got one monkey off their back with the playoff win over the Raiders last week. Now, the Bengals face the franchise once known as the Oilers for a chance to advance to their first AFC Championship game since 1988. It figures to be tight, but they have the bodies to get it done for the first time ever on the road.