Bengals seek a win that would put them in prime position heading into December. 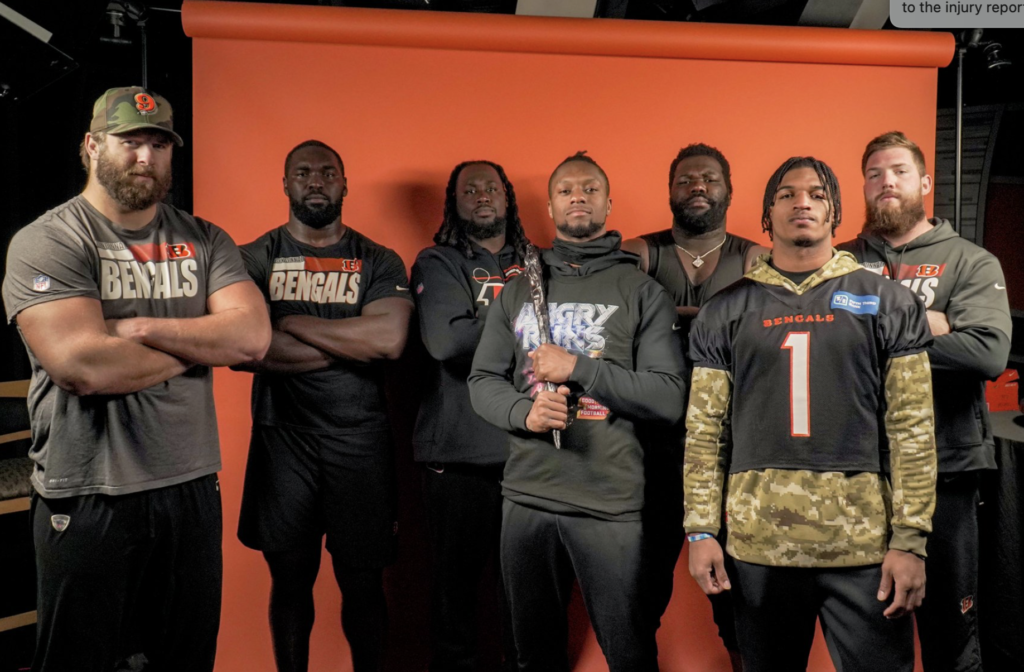 CINCINNATI – The Bengals will try to do something Sunday against a longtime rival they haven’t accomplished in 31 years.

The Bengals, with a win over the Steelers, would not only put themselves in good playoff position heading into the final six weeks, but they would also notch their third straight win over the Steelers, something they haven’t accomplished since winning six in a row over Pittsburgh in the 1988, ’89 and ’90 seasons.

They haven’t swept a season series from the Steelers since 2009, when they swept the AFC North on their way to the division title.

But a lot stands between those two check marks and a win on Sunday.

The Bengals are facing a Steelers team that is significantly healthier than it was in Week 3’s 24-10 Bengals win, in which Tyler Boyd famously said a day later the Bengals forced the Steelers to quit at the end of the game.

Bengals WR Ja'Marr Chase reached a top speed of 20.35 MPH on his 34-yard TD against the Steelers, per NFL Next Gen. Second-fastest top speed by a Bengals WR on a receiving TD in the last three years. pic.twitter.com/66xEKVSNLK

On defense, the Steelers did not have the services of all-world edge T.J. Watt and right outside linebacker Alex Highsmith.

“It’s hard to predict what they’ll do differently depending on their personnel, but I just know T.J. Watt is always a defensive player of the year candidate,” Bengals coach Zac Taylor said. “When he’s in the game it changes a lot of things. They’ve always been strong up front as long as I’ve been here. People always talked about him and Bud Dupree. They’re tremendous players.

“Cam Heyward, 97, he wrecks games. It’s not often you say that about defensive tackles, but they can move him around in so many different positions. He’s got such knowledge of the defense and knowledge of his matchups. He’s always a guy you have to pay attention to and be dialed in on, because he will wreck a game in a heartbeat. We’ve got a lot of respect for all their guys on defense. They’ve had a solid defense for a long time.”

“They didn’t have TJ Watt, that’ll definitely, you’ve always got to be aware of him,” Joe Burrow said Wednesday. “It’ll be a different game.

Joe Burrow: He was essentially a game-manager against the Raiders as the Bengals finally got their run game going, with Mixon exploding for over 100 yards in the second half last Sunday in Vegas. Burrow would be very happy to repeat his conservative statistical game in Week 3, when he attempted a season-low 18 passes, completed a season-low 14 for 172 yards. Three of those 14 went for touchdowns. Limiting his exposure is particularly critical this week with the pass rush (see below) that he will be facing.

Joe Mixon: The running back has at least one touchdown in seven straight games, a franchise record. He is coming off his second-highest yardage total with 123 yards on a season-high 30 carries against the Raiders. He had 90 yards on 18 carries in Week 3 and his involvement in the game plan figures to be a no-brainer for Taylor and Callahan. Get him going early, even if the yards aren’t there. The Bengals positively, absolutely must establish him in this game against the Steelers defensive line and linebackers. What better way to commemorate Mixon’s victory on NFL Network’s Angry Runs Inner Scepter World Tour than a win over the Steelers? Ja’Marr Chase knows all about Angry Runs from last week’s truck job in the third quarter.

“What the hell am I doing?” Ja’Marr Chase on getting trucked by Joe Mixon in second half run Sunday. #Bengals pic.twitter.com/FAi4hVcpOR

Ja’Marr Chase: After his 201-yard performance in Baltimore, with eight catches on 10 targets, Chase has a pair of 32-yard games against the Jets and Raiders sandwiched around a 49-yarder against the Browns. He’s caught just 12 passes on 28 targets in that span. He had four catches on five targets in Pittsburgh in Week 3, but two of them were TDs, including that spectacular fingertip job down the left side right before halftime that put the Bengals up, 14-7.

T.J. Watt and Alex Highsmith: Neither one of these pass-rushing behemoths played in Week 3, as both missed with groin injuries. They should be good to go this time. The Bengals have had their difficulties with the edge of late. Even in the win over the Raiders, the Bengals were getting hounded by Maxx Crosby and Yannick Ngakoue. Against Cleveland, Myles Garrett and Jadeveon Clowney got home far too often for the comfort of Burrow, who has scraped himself off the turf often in the last three weeks. It would behoove the Bengals offensive line and pass-protection long-term well-being of their franchise quarterback if the Bengals could find a way to continue running the ball and getting the ball out of Burrow’s hands on time.

Ben Roethlisberger: Big Ben is not having one of his most prolific seasons, having surpassed 300 yards just once this season, against the Bengals in Week 3. The Bengals would gladly take a repeat of that end result, if it means Roethlisberger throws 58 times and completes 38 passes (both season highs). He was sacked four times that day, threw a pair of picks and just one touchdown to tight end Pat Freiermuth.

Diontae Johnson: The only game Johnson has missed this season was in Week 3 against the Bengals. Since then, he’s been as dynamic as any slot receiver in the game. The last two weeks, in the tie against Detroit and the loss to the Chargers, Johnson has been targeted 13 times and caught seven passes each week, and posted 101 yards receiving and a touchdown in Sunday night’s game.

Najee Harris: The running back isn’t doing damage in the run game, but he certainly is in the pass game, as the Bengals found out in their Week 3 encounter. In that game, Harris was targeted 19 times, catching 14 for 102 yards. He’s the second-leading receiver on the team in terms of receptions with 49 in 62 targets. Chase Claypool has the second-most yards receiving on the team with 526.

Evan McPherson is coming off his best game as a pro in terms of field goal kicking, converting a team-record three field goals from beyond 50 yards and another from 47. That performance earned him his second AFC Special Teams Player of the Week honor, despite missing his first PAT as a pro. He’s 29-of-30 this season on extra points. McPherson is 15-of-18 in field goals this season.

Kevin Huber is holding steady in the middle of the NFL pack of punters, posting a 40.9 net yards average through ten games, which is tied for 16th in the NFL. Huber has four touchbacks in 38 punts.

Pressley Harvin has slipped below 40 yards on his net average, coming in at 39.2, but 17 of his 41 punts have been inside the 20, which ranks him sixth in the NFL.

Success on offense for the Bengals starts with neutralizing as much as possible T.J. Watt, Alex Highsmith and Cam Heyward. Without sufficient protection and some threat to run the ball, the Bengals will have little chance to move the sticks. But this is where Tyler Boyd could have another big game. In addition to Joe Mixon, C.J. Uzomah and Chris Evans could again figure into the offensive plan to hit Pittsburgh with quick-strike, on-time passes that help Burrow avoid the rush and take some pressure off the Bengals offensive line. Another big game from the Bengals secondary should be in store against Big Ben, who could be tempted into forcing the ball into tight windows. Bengals are in line for their first in-season sweep of the Steelers since 2009.