Bengals receiving corps should have a big day against young secondary, D-line needs to get after Goff. 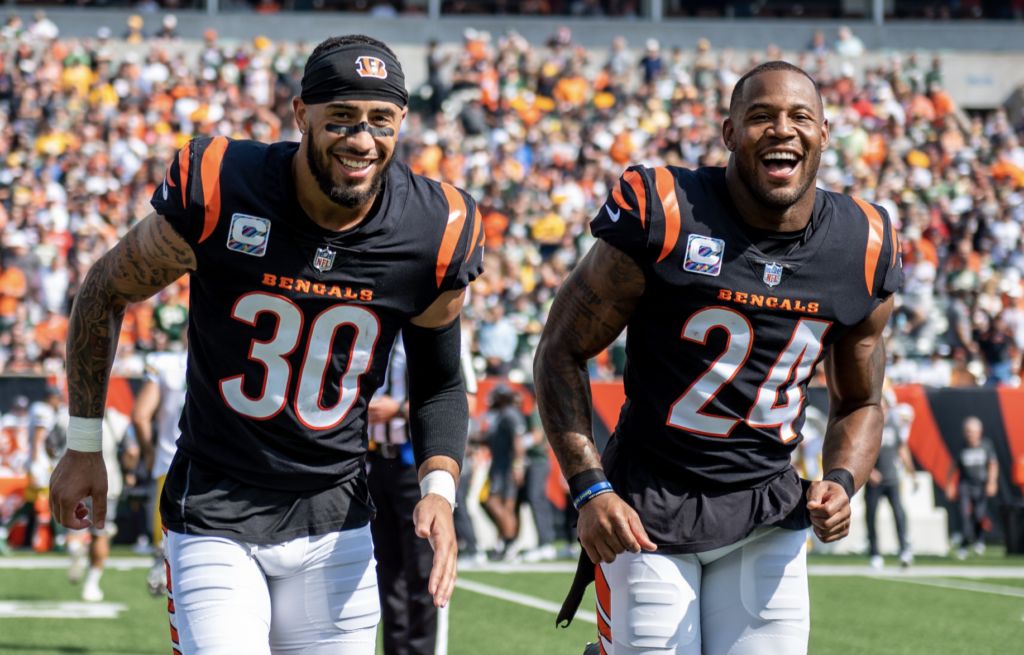 The Bengals travel to the Motor City for the first time since 2013 in a game that has trap written all over it.

This is a Lions team that had the now-4-1 Ravens beaten before Justin Tucker made NFL history with his 66-yard field goal off the crossbar on Sept. 26 at Ford Field. This is a team that inspired Kirk Cousins to assault Vikings head coach Mike Zimmer in celebration after being given the reprieve of another game-ending field goal last Sunday in Minnesota.

Point is, the Bengals better be ready for a fight.

They have said all the right things this week, led by head coach Zac Taylor, who told us on Wednesday that “this is not an 0-5 team when you turn on the tape.” The Bengals need to execute a solid game plan offensively against a defense that has an undrafted rookie free agent starting at one corner.

The Bengals are coming off a difficult-to-swallow 25-22 overtime loss to the Green Bay Packers that sent their franchise quarterback to the hospital in the moments afterward with a throat contusion. The team has insisted all week that Joe Burrow, who didn’t speak with media all week, will be fine and it shouldn’t impact his ability to call signals inside a stadium filled with fans hoping to celebrate the first win of 2021.

“It’s a tough loss,” said Taylor. “It will come down to some last-second plays, and sometimes we’ll make them and sometimes we won’t. This will serve us well over the course of the season. We’re battle-tested.”

Well, the biggest test Sunday very well may be emotional. The Bengals can’t afford a flat start against a Lions team that has nearly tasted victory twice, only to have it ripped away at the last second.

We’ve been told Joe Burrow will be able to call his plays as normal and will go to the silent count as per usual when the indoor stadium gets loud. Zac Taylor told me on Friday that the Bengals use three types of silent counts when on the road – Leg, hand and hand claps – to initiate plays, depending on field position and game time and situation.

The Bengals caught a break when rookie Jackson Carman cleared COVID-19 protocols and was removed from IR on Friday morning and returned to practice. He’ll be available to play right guard. Good thing since fellow rookie D’Ante Smith, his presumed replacement, tore meniscus in his knee and is out until at least through the bye. The Bengals are already down Xavier Su’a-Filo with his own knee problem. Carman’s back-up is rookie Trey Hill, who was drafted as a guard before being slotted in as Trey Hopkins back-up at center in the wake of the Billy Price trade to the Giants at the end of preseason.

This is the game that the rookie from Michigan figures to have a much bigger role since Samaje Perine landed on COVID-19 with Carman on Monday. He was not removed in time to be eligible to play Sunday. Taylor said that Joe Mixon will have his normal work load after practicing on Friday. With Evans in the game, the Bengals could disguise run and pass as Evans has shown good receiving skills early on in his Bengals career. Trayveon Williams, the third-year back out of Texas A&M, will be active for the first time this season. Unlike the stingy Packers, the Lions are giving up 130.2 yards per game, ranked 23rd in the NFL.

Tee Higgins had two drops last Sunday, including the key one late in the fourth quarter that could’ve given Evan McPherson a better shot at the game-winning field goal. Instead, his 57-yarder clanged off the right upright, giving the Packers new life.

Joe Mixon takes it in for six ➡ Tee Higgins TIES IT UP!

Higgins had several 1-on-1 matchups and could see that again this week if the Lions decide to double Tyler Boyd (as the Packers did) or Ja’Marr Chase (after another monster game). Higgins needs to beat his man, get open throughout the young and inexperienced Lions secondary and help the Bengals move the chains and put up some first-half points.

Your @pepsi Zero Sugar Rookie of the Week! pic.twitter.com/whueS2NAy8

When the Lions have the ball:

Zac Taylor should have a huge advantage here, knowing the tendencies of the Lions quarterback in his first year in Detroit. Taylor was his quarterback coach for Sean McVay in Los Angeles in 2018 when the Rams made it all the way to the Super Bowl before losing to the Patriots, 13-3. Jesse Bates indicated this week that Goff tends to hold onto the ball, trying to extend plays. He believes the Bengals front can get to Goff for some hurries and sacks. Sam Hubbard confirmed this. It’s up to Taylor to specifically identify this tendencies on certain downs and make the defense aware so they’re ready for third-and-medium and third-and-long. They are allowing sacks on 7.11 percent of pass attempts. But the real startling number the Bengals MUST take advantage of is their third-down conversion rate. They are converting just 32 percent of their third downs. Only two teams (Washington, Denver) in the NFL are worse.

One of the true weapons the Lions do possess, Vonn Bell and the Bengals secondary must not let him run free in the secondary the way Davante Adams did last Sunday. Hockenson. The second-year tight end is averaging 9.9 yards per reception and is second on the Lions with 24 catches and has two catches. The other weapons include D’Andre Swift, a running back who does his biggest damage as a pass-catcher. He leads the Lions with 29 and is averaging 3.7 yards a rush. Swift and former Packer Jamaal Williams split the ball-carrying duties almost equally. Williams has 244 yards and two touchdowns on 55 carries while Swift has 190 yards on 52 carries and also two scores. Goff has scrambled 11 times for 72 yards.

#Dynasty #FantasyFootball #NFL     folk, where we at on TJ Hockenson?

My take:
🗣I’ll admit, I had a lot higher expectations, about 60 days ago. The last3️⃣weeks have been😑, but I still believe. I think now is a good time 2find a frustrated owner.🧠🦍⭐️🧩pic.twitter.com/JKIAZgu2DD

The man the Bengals could have drafted fifth overall in the draft has had a rough go of it for the Lions. They have moved him from left tackle to right tackle to account for some injuries along the line and he is working through an ankle problem of his own. He still figures to be a cornerstone of the Lions offensive line going forward and he just turned 21 on Oct. 9. He’s allowed four sacks this season. This is a game the Bengals defensive front should be able to reveal some of his rookie vulnerabilities.

With Trae Waynes back on IR, Apple is back in the spotlight. CB Tre Flowers, acquired Thursday on waivers from Seattle, will travel but not play Sunday.

The Lions top punt returner is also their top receiver in Kalif Raymond, with four returns but only an average of 9.1 yards, including a long of 22 yards. Kevin Huber’s net average has slipped in the last two weeks, down to 40.4 yards, tied for 20th in the NFL. Huber has had a couple of plus-50 touchbacks which have brought the average down.

Look for a bounce back game from rookie Evan McPherson. He has misses of 57 and 49 yards that could’ve won the game against Green Bay. They weren’t chip shots by any stretch but kicks that McPherson feels he could’ve and should’ve made. They both missed by literally inches. He’s still a clutch kicker and this will be his first chance to kick in a controlled environment. The Bengals hope they don’t need him that much this weekend. But if they do, they’ve got one of the strongest legs in the NFL.

In his third NFL season, Jack Fox is one of the bigger weapons on the Lions. As one would expect on a winless team struggling to score points, Fox has had a lot of chances. He’s made the most of them, sporting a 45.1 net average that is third in the NFL, just 0.4 yards off the league lead.

It was assumed in camp that Austin Seibert would certainly land on an NFL roster once the season began after his battle with rookie Evan McPherson. Detroit was that spot. Seibert missed two games after testing positive for COVID-19 but returned last week and converted three field goals. He is 5-for-6 this season, including 1-of-2 from 50-plus. Seibert was replaced by Ryan Santoso for the two games Seibert missed.

The Bengals have the better and deeper roster and should be able to put points up on this Lions team that is vulnerable in the secondary and iffy against the run. Zac Taylor should have some good insight on how to make Jared Goff uncomfortable and the Bengals defense is reasonably healthy and hungry for some sacks. There really is no reason to come out of this game with anything but a business-like win. They should and will.