No surprise it starts with playing mistake-free and handling Aaron Donald and Von Miller. 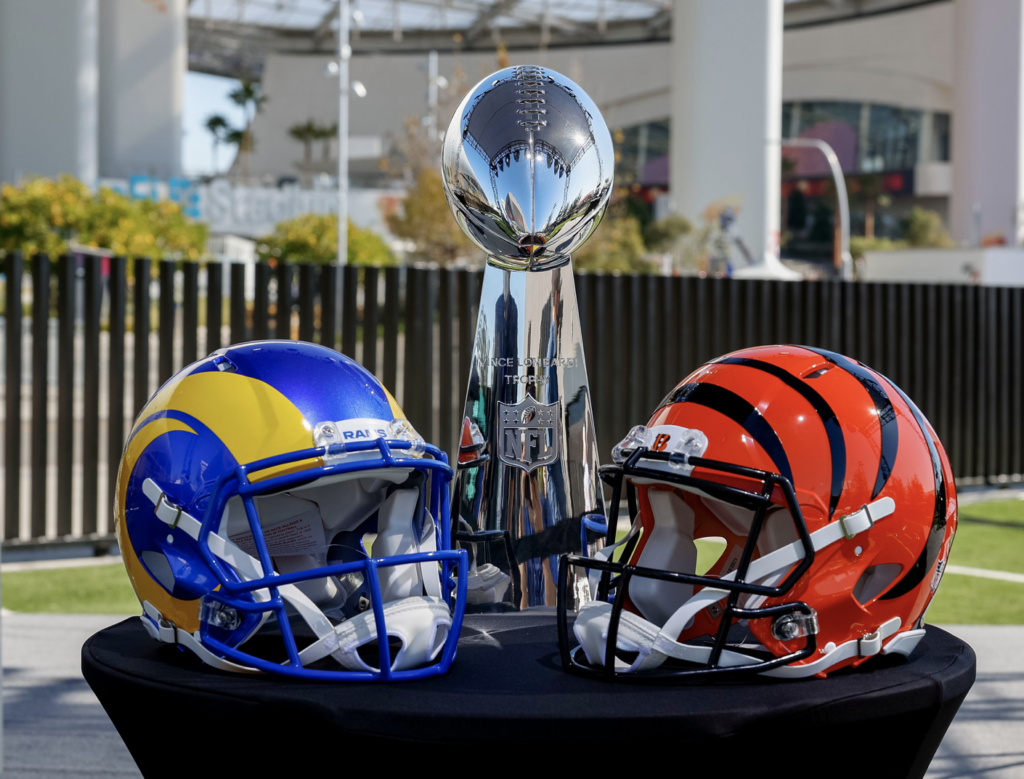 LOS ANGELES – Only 60 minutes stand between the Bengals and a true Hollywood ending to the most memorable season in their 54-year history.

The Bengals vanquished a 31-year playoff victory drought with a win over the Raiders on Jan. 15. They recorded their first road playoff win a week later in Nashville over the top-seeded Titans. They wiped out an 18-point hole on the road in Kansas City when they beat the Chiefs, 27-24, in overtime in the AFC Championship.

Now, they have a chance to bring home the first world championship in franchise history and the first for Cincinnati since the Reds won it all with a four-game sweep of the Oakland A’s in the 1990 World Series.

Ironically, the Bengals will officially be the home team Sunday against the Los Angeles Rams in LA’s home building.

The Rams are headed to the Super Bowl for the second time in five seasons under head coach Sean McVay. Three years ago, the high-powered Rams offense was shut down by Bill Belichick’s defense as the Patriots prevailed, 13-3, when then-Patriots running back Sony Michel scored the game’s only touchdown in the fourth quarter. Michel now teams with Cam Akers in the Rams backfield.

The Rams will be the first team ever to host a Conference Championship game and a Super Bowl in the same season. McVay and Zac Taylor will be the youngest matchup of Super Bowl head coaches ever.

Both the Rams and Bengals will enter the Championship match up as four seeds – matching the highest combined seeding in a Super Bowl since seeding began in 1975.

Speaking of 1975, Sunday could be the moment for 86-year-old owner Mike Brown that long-suffering Steelers owner Art Rooney enjoyed on Jan. 12 of that year in New Orleans. After 41 years of ownership, Rooney, then 74, finally reached the NFL pinnacle as the Steelers defeated the Minnesota Vikings, 16-6, in Super Bowl IX. Brown took over for his father Paul in 1991 following his death.

Mike Brown has been in the organization in some capacity since Paul founded the franchise in 1968.

If the Bengals prevail after a 54-year wait, that will leave 11 teams without a Super Bowl title. The Vikings, Falcons, Bills, Chargers and Titans (Oilers) are the only teams that have waited longer for their first NFL title.

When both teams take the field, 13-year veteran Matthew Stafford and second-year star Joe Burrow will be the second starting quarterback matchup between two number one overall picks in the Super Bowl. Peyton Manning and Cam Newton were the first to do this in Super Bowl 50.

“I’m happy for this team and everyone in the organization,” said head coach Zac Taylor. “You can’t help but think about the people back in Cincinnati celebrating right now, and about all the people that were here (in Kansas City). When all of our fans got down there at the end of the game, it felt like it was half the stadium. It was a special moment.

Taylor and all of Cincinnati are hoping for one more special moment after Sunday’s Super Bowl.

Joe Burrow: Quite simply the most important player on the field for the biggest game in franchise history. And there’s not a better choice to have in that position. Only two years into his NFL career, he’s accomplished so much with so much on his shoulders. Even Tom Brady in his second season with the Patriots in 2001, had a defense to fall back on. Brady was asked not to make big mistakes in big moments. Burrow has been all that for the Bengals late in wins over the Raiders, Titans and Chiefs. One more, and he’ll have a Super Bowl ring to add to his collection of jewelry, while becoming the first NFL quarterback ever with a Super Bowl ring, a national championship and a Heisman Trophy.

DT Aaron Donald and Edge Von Miller: Don’t let them wreck the game. Be patient in the run game and Frank Pollack needs to throw the kitchen sink against Donald and frustrate Donald the way Patriots offensive line guru Dante Scarnecchia did three years ago in Super Bowl LIII. By the end of the game, Donald was frustrated, and Joe Thuney was able to handle his own business against Donald. Goes without saying, Burrow’s release time needs to be under three seconds in the pocket. Tom Brady got rid of the ball on time all game to Julian Edelman, who won MVP honors, catching 10 passes on 12 targets for 141 yards. (See below).

Ja’Marr Chase vs. Jalen Ramsey: Joe Burrow has said all season that defenses can feel free to cover Ja’Marr Chase man-to-man. But they do so at their own risk, daring defensive coordinators like Raheem Morris to put just one defender on Chase. But Jalen Ramsey is no ordinary defender. But don’t be surprised if Morris decides to occasionally stick Ramsey on Tee Higgins and bracket/cloud Chase and take the chances with Tyler Boyd underneath. Could be a huge moment for the six-year Bengal slot receiver to shine.

C.J. Uzomah: If the tight end’s sprained left MCL is 75 percent (whatever that is), then he could be invaluable in running formations that – as Zac Taylor told me Thursday – ordinarily would make no sense just to free receivers or get Joe Mixon going. If Uzomah can play 75 percent of snaps that will also make a huge difference in the run game and the Bengals ability to chip Von Miller off the edge.

Joe Mixon: Get Mixon 20-25 touches. Against the Chiefs in the AFC Championship, Mixon had 88 yards on 21 carries against the Chiefs and 27 yards on three catches (on three targets). Those are healthy numbers. That’s something, if repeated, will go a long way to winning Vince. Mixon will likely need to be extra patient in his run schemes, especially on back-side zone runs like the one he ran in for a touchdown against the Titans.

Matthew Stafford: You might see more “Drop-8” against the Rams quarterback, who is exceptional against the blitz but could be baited into bad passes if frustrated if everyone is covered.

Cooper Kupp/Odell Beckham Jr./Van Jefferson: This trio can match the Bengals in terms of explosiveness. Chido Awuzie has given up some big plays in the postseason but is still a very dependable No. 1 corner. Key here is to keep the Rams and Stafford in obvious passing downs so that Lou Anarumo can dial up his favorite coverage calls instead of trying to guess on third-and-3 and third-and-four. Mike Hilton said this week he’s looking forward to matching up with the game’s most prolific slot receiver. He’ll more than get his chance as Kupp will get plenty of “Choice Stucko” routes, the inside routes in the Kyle Shanahan system designed to free up tight end George Kittle. How the Bengals handle OBJ and Jefferson will go a long way in determining their ability to keep LA from explosive downfield plays.

Cam Akers/Sony Michel: Two-headed tandem could do damage in second-and-short and third-and-short if the Bengals get too enamored with dropping into coverage to handle receivers. Michel ran for 94 yards on 18 carries for the Patriots and scored the game’s only TD in the 13-3 New England win in Super Bowl LIII three years ago.

Red zone defense: This has been the Bengals calling card in three playoff wins. It will have to be again if the Stripes are to win their first Super Bowl in 54 years. The Chiefs converted their first three chances before Eli Apple made the biggest red zone play in Bengals history when he stopped Tyreek Hill at the 1 as time ran out in the first half in the AFC Championship. In the same game, Sam Hubbard had sacks on back-to-back snaps of Patrick Mahomes at the end of regulation that forced the Chiefs out of the red zone and forced Harrison Butker to hit a 44-yard field goal. The Bengals were 4-for-5 in keeping the Raiders out of the end zone in the red zone in the Wild Card round. They allowed only a direct snap TD run to Derrick Henry in three chances.

What more needs to be said about one of the best rookie kicking seasons in recent NFL memory? Evan McPherson has been “Money Mac”, “Shooter” and “EZ-Evan” all rolled into one. He’s converted all 12 field goal attempts in the playoffs and all four extra points. He needs just three field goals to set a new NFL all-time single-season playoff record, passing the 14 of Adam Vinatieri in 2006. He’s accounted for 40 of Cincinnati’s 72 points in the postseason.

Kevin Huber had three punts in the AFC championship for a net average of 40.3 yards, right at his season average and two of the three were inside the 20.

Patriots coach Bill Belichick once called Johnny Hekker one of the most imposing special teams weapons in the NFL for his ability to flip field position. The veteran punter hasn’t disappointed this season. His 42.4 net average was fourth-best in the league this year and out of 51 punts in the regular season, just one landed for a touchback. In the playoffs, nine of his 10 punts have avoided the end zone.

If nothing else in three playoff wins, the Bengals have mastered the flair for the dramatic. Germaine Pratt’s interception sealed the win against the Raiders with 12 seconds left. Against the Titans, Eli Apple tipped a Ryan Tannehill pass to the waiting arms of Logan Wilson. One clutch Joe Burrow-to-Ja’Marr Chase reception later, it was Evan McPherson from 52 yards for the game-winner. Against the Chiefs, it was a Jessie Bates-Vonn Bell combination on an interception of Patrick Mahomes that set up McPherson from 31 yards in overtime to send the Bengals to this moment. No reason to think the Bengals won’t continue the big play momentum with Vince Lombardi trophy on the line. McPherson from 50 for the game-winner at the gun.