W2L4: How Bengals Begin Path Back To Super Bowl With Wild Card Showdown With Ravens 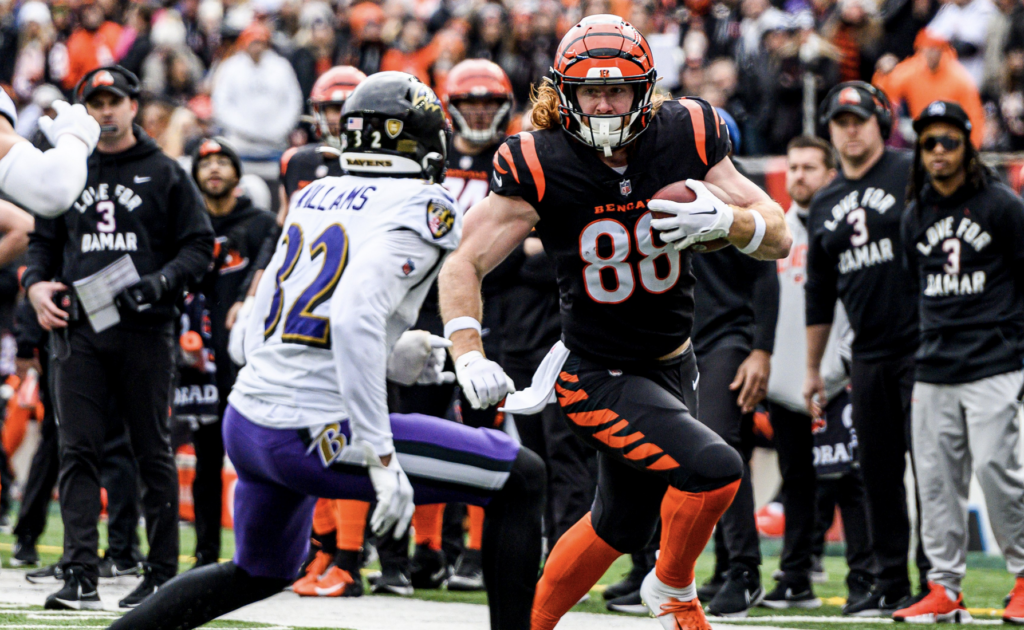 CINCINNATI — The superhighway to a Super Bowl return begins in earnest Sunday night at Paycor Stadium.

And thanks to a win last week over the team they’ll be facing Sunday, that highway starts at home in Cincinnati.

The Bengals, who closed out the regular season with eight straight wins and captured back-to-back AFC North Division titles for the first time in team history, now begin their quest to repeat as AFC champions. That quest begins against a Ravens team that split its two meetings with the Bengals. Baltimore won on a Sunday night in Charm City in Week 5 while the Bengals prevailed, 27-16, last week in the regular season finale at Paycor.

Lamar Jackson has been ruled out again by Baltimore, leaving quarterback duties to Tyler Huntley, who missed last week with right shoulder and wrist injuries. Anthony Brown, last week’s quarterback, is expected to serve as the backup.

Though the Bengals’ offense was uncharacteristically stagnant after grabbing a 17-0 lead early in the second quarter, head coach Zac Taylor acknowledged that getting a win over a division rival carries more weight than the performance itself.

“That’s AFC North football,” Taylor said. “Show me a pretty game that anybody has won in this division, and that will be the first one I’ve seen. I’m so proud of the way these guys found a way to get it done by two scores. I thought our defense was excellent taking the ball away and finishing off some drives. The offense tacked on the points when we needed to. Certainly, there are some things that we can clean up so that we can be better off, particularly on offense, but I’m just proud of the way that these guys found a way to win in January.”

Cincinnati built its 17-point lead thanks to a pair of interceptions, first by Jessie Bates and later by nickel corner Mike Hilton. Both led to touchdown drives for the Bengals. The offense was able to take advantage of strong field position, as Joe Mixon plunged into the end zone on a one-yard run near the end of the first quarter, and barely two minutes later Joe Burrow hit Ja’Marr Chase down the left sideline for a 26-yard score.

A Ravens touchdown followed by a Bengals punt gave Baltimore the ball and a chance to cut it to a one-possession game late in the second quarter. But Trey Hendrickson delivered perhaps the most pivotal play of the afternoon, as he collapsed the pocket and sacked Anthony Brown near the Ravens’ goal line, knocking the ball loose in the process. Joseph Ossai jumped on the fumble in the end zone for the Bengals’ first defensive TD of the season, restoring the 17-point advantage as the teams went into halftime.

The Bengals’ defense has been a dangerous unit as of late, with 10 takeaways in its last four games. Offensively, Cincinnati is among the best in the league at turning those possession swings into points, and the three touchdowns scored off takeaways in the first half of Week 18 were the most in an opening half of a game by any NFL team since 2007 (most by a Bengals team since 2000).

As they turn their attention to the Wild Card, the Bengals face the unique challenge of playing a team for a third time in one season. Baltimore sat out several starters, including Mark Andrews, J.K. Dobbins and Marcus Peters, in the regular-season finale with its spot in the playoffs already secured.

Cincinnati enters the postseason with as much belief as any team, particularly given the success of this time a year ago. The Bengals last season defeated Las Vegas in the wild card round, ending a 31-year drought without a postseason win, and went on to earn a pair of hard-fought road victories at Tennessee and Kansas City to punch their ticket to Super Bowl LVI. While coming up short in the franchise’s first trip to the Super Bowl since 1988 has served as motivation throughout this season, the current Bengals will now rely on that experience as they try to put together another memorable run.

“Guys are feeling confident,” DJ Reader said. “We have to keep going up — keep elevating — knowing that this is a one-game season now. We know the recipe to do it; we just have to go out there and do it. We have a lot of guys who are still hungry and competitive, and I think they understand how important it is.”

Sunday night’s showdown will be the 17th time since the 1970 NFL/AFL merger that two teams meet in the first round of the playoffs after playing each other in the final week of the regular season. However, it will be the first postseason meeting in a Bengals-Ravens series that dates back to 1996.

Obviously, this is a big moment for the 26-year-old right guard. He filled in admirably for Alex Cappa when the starting right guard went down in the fourth quarter Sunday. The Ravens will send all types of pressure over the middle to test not only Scharping, who played well in his two previous playoff appearances for Houston in 2019, but more importantly the communication between center Ted Karras and right tackle Hakeem Adeniji. Calais Campbell, Jason Pierre-Paul, Justin Houston and David Ojabo all made their presence known last Sunday.

For as impactful as Roquan Smith is as a pursuing linebacker, he can also be a ball hawk, as witnessed by his pick-6 of Burrow in Week 2 in Chicago last season when he was with the Bears. The duo of Smith and Patrick Queen are formidable. Marcus Peters, Kyle Hamilton and Marlon Humphrey are all quality defensive backs capable of making big plays. The priority Sunday night will be protection early and getting rid of the ball on time to minimize the pass rush.

What third-string QB Anthony Brown saw from the Bengals defensive coordinator last week will not resemble at all what Tyler Huntley will see Sunday night. The Bengals figure to show some exotic looks, delayed blitzes and pressures and will likely try to “ghost” the Ravens back-up quarterback. Ravens head coach John Harbaugh will no doubt try to slow this game down, limit the possessions and keep this a one-possession game, hoping for a Bengal mistake or two to give them a chance late. If the Bengals defense can get off the field on third down, that strategy goes out the window. Aside from turnovers, Cincinnati’s third down defense will likely be the biggest key in how this game unfolds. The Ravens will have J.K. Dobbins back running the ball. Control the run game and the Bengals should be in great shape.

It was in Week 7 last year that Tre Flowers, freshly added to the Bengals roster, made his impact. The defensive back was brought in to contain Ravens tight end Mark Andrews. And he did, holding Andrews to three catches on seven targets for 48 yards. In Week 5 this year, Andrews caught eight passes on 10 targets from Lamar Jackson for 89 yards and a touchdown. The Bengals need to make life difficult on one of the few true playmakers the Ravens have on offense.

Chase and Higgins were limited in Week 5. Higgins played just 10 snaps due to an ankle injury and didn’t have even a target. Chase was held to seven catches and 50 yards in the 19-17 loss. Last week, Chase had eight catches for 86 yards and a touchdown while Higgins had just one catch on seven targets for seven yards. Burrow will likely to try to activate these two early Sunday. Watch out for tight end Hayden Hurst on vertical routes and Tyler Boyd running underneath to stress the Ravens secondary.

Unlike the Carson Palmer and Andy Dalton editions, the Joe Burrow-led Bengals no longer look at games like Sunday night as they huge events. This Bengals team believes it’s simply the first step on the path toward their final goal. The Bengals have proven they can handle the big moment and play to their strengths. That’s what the Bengals should do Sunday night. Yes, the Ravens have the newly-extended Roquan Smith, a off-the-ball playing at an elite level as his defensive player of the month for December/January demonstrates. But the Bengals have seen great defensive players on good teams before. The Bengals simply have more weapons. Chase, Higgins, Boyd, Hurst. And they have an elite quarterback. That’s enough on offense. On defense, you’re talking about a defense that is sixth in the NFL in points allowed (20.1) going up against Tyler Huntley and a Ravens offense that has recorded 20-plus once since Nov. 20. Don’t turn the ball over and this game should not be close.