W2L4: How Bengals Can (And Should) Overwhelm Jets 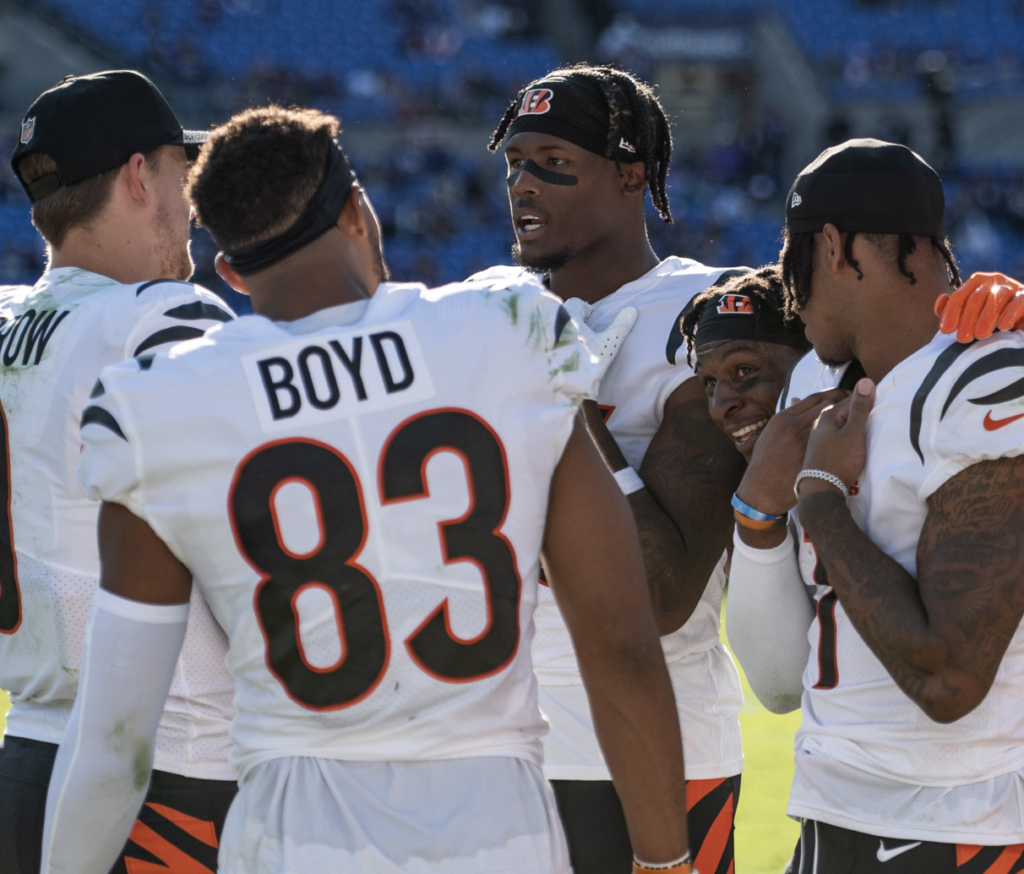 Mike Hilton looks to keep the Bengals offense loose this week as Cincinnati aims for a three-game sweep of their road trip.
Share
Facebook Twitter Email

EAST RUTHERFORD, N.J. – The Bengals enter their Week 8 contest in the Big Apple as prohibitive 11-point favorites against the woebegone Jets at MetLife Stadium.

Yes, with the Browns on the menu in Week 9 before the bye, this could be the cliché trap game. But it shouldn’t be.

The Bengals biggest job in this game is to act like the superior team they are and not give the Jets a hope of repeating what they did to the Titans in this same stadium in Week 4. That week, the Jets rose up and shocked the superior Titans 27-24 in a game that resembled Cincinnati’s 31-20 win over Tennessee in 2020. In that game, Corey Davis caught four passes for 111 yards and a touchdown and Keelan Cole had three catches for 92 yards.

What makes the Jets dangerous this week is what happened last week in Foxboro. The Jets enter Sunday’s matchup 1-5, after losing 54-13 at New England last Sunday. They lost their star rookie quarterback Zach Wilson on a questionable low hit on the sidelines as he was throwing the ball away. He’s out indefinitely with a PCL sprain. Their leading receiver Corey Davis is high doubtful with a hip flexor strain. And linebacker C.J. Mosley could be limited with a hamstring injury.

This Jets team is likely to be fired up early for their high-energy coach Robert Saleh. The key will be not to let them hang around and build confidence. The Bengals had never won in the Meadowlands before finally snapping that string with a 23-22 win in the 2016 season opener at MetLife Stadium. They never did win at Giants Stadium against either the Giants or the Jets, going 0-9 against the Jets and 0-3 against the Giants.

The Bengals take on the Jets and look for their first three-game winning streak since starting 2015 with an 8-0 mark. If the Bengals avoid the upset, they would not only sweep all three games on the road swing through Detroit, Baltimore and New York, they would enjoy a four-game road win streak, their longest since winning their first four roadies of 2015.

“Confidence matters,” Bengals coach Zac Taylor said. “But you have to put in the work to be able to have that confidence, and our guys do. I don’t worry about a game like (the win in Baltimore) carrying over, because too many people on this team understand what it takes to win.

“We have too many guys that have played on championship teams in college, or who have played on other great teams in this league. They understand what it takes to build this and how long it’s going to take to get there this season. So, I just have too much confidence in our guys now to get complacent.”

Ja’Marr Chase. The reigning AFC Offensive Player of the Week caught eight passes for a Bengals rookie-record 201 receiving yards and a TD on Sunday. His receiving yardage total was the highest in the AFC so far this season, and his 82-yard TD in the third quarter was the longest pass play of the year in the AFC. Chase’s 754 receiving yards currently lead the AFC and rank as the most ever by an NFL player through his first seven games.

Even his old LSU teammate Justin Jefferson is rooting for him to break the all-time rookie receiving mark Jefferson holds at 1,400 yards. “He’s been doing a great job. He’s killing it, especially having Joe, his college quarterback. I’m proud of him and of Joe and I hope he does break it,” Jefferson said this week.

Joe Burrow: Somewhat lost in the shuffle of Chase’s 201-yard day, the Bengals quarterback had a career day against Baltimore, completing 23-of-38 passes for 416 yards and three interceptions. More of the same should be in store this week. The Jets are giving up 275 yards a game through the air. Through six games, the Jets have sacked the quarterback 14 times with a front that Burrow will have to be alert for, starting with Quinnen Williams and Shaq Lawson up front. Quinton Spain this week called this the most physical front the Bengals have seen this season. If the Jets blitz, Burrow should be ready. He’s rated No. 1 in QBR this season in the entire NFL when teams blitz, coming in at 93.1. That’s an improvement from 65.7 in his rookie season of 2020, when he was rated 23rd. Safety Marcus Maye is a ball hawk but avoid him and the Bengals should be able to light up the scoreboard, as rookie Mac Jones enjoyed his first 300-yard passing day last week in the rout.

Get to White: This should be a recipe for success for Lou Anarumo. The defensive coordinator faces quarterback Mike White, making his first NFL start. The quarterback was drafted by Dallas in the fifth round in 2018. He filled in for the injured Wilson last week and threw a nice touchdown for New York’s first points. But that said, he finished 20-of-32 for 202 yards and the touchdown in the back corner of the end zone to Corey Davis.

Jets quarterbacks have been sacked 20 times in six games. This figures to be a game the Bengals, who sacked Lamar Jackson five times last week, enjoy another day of meetings at the QB. “I would blitz his ass every play. I would just let the house go,” suggested former Bengals corner Adam “Pacman” Jones to Solomon Wilcots on the Bleav in Bengals podcast.

Evan McPherson connected on both attempts last week in Baltimore and stands 9-of-12 on the season. His 52-yarder got the Bengals on the board. His 30-yarder at the end of the first half put the Bengals up, 13-10. McPherson has two game-winning kicks as time expired this season and two more right before halftime in each of the last two games in Detroit and Baltimore.

Kevin Huber has a 40.9 net yards average, which ranks him 15th in the NFL. Huber has four touchbacks in 29 punts. His touchback last week against Baltimore from the Ravens’ 39 resulted in a net 19-yard punt, bringing his average down. Braxton Berrios is a dangerous returner for the Jets. He’s only returned four punts while calling fair catch on 11 others. But when he does return, he’s averaging 13.3 yards.

Veteran Thomas Morstead handles the punting duties and serves as one of New York’s lone bright spots. Six of his 19 punts have landed inside the 20 and he ranks in the top 10 for both gross average at 47.7 yards and net average at 42.0 yards. Most impressive, not one of his 19 punts this season have resulted in a touchback.

This game on paper should not be a contest. The formula in the first two game of this three-game road trip have been to offensively start slow and then pull away in the second half with an offensive explosion, especially in the third quarter. The Bengals need to get in the habit of starting faster and here’s thinking they do just that ahead of the showdown with the Browns at Paul Brown Stadium on Nov. 7.