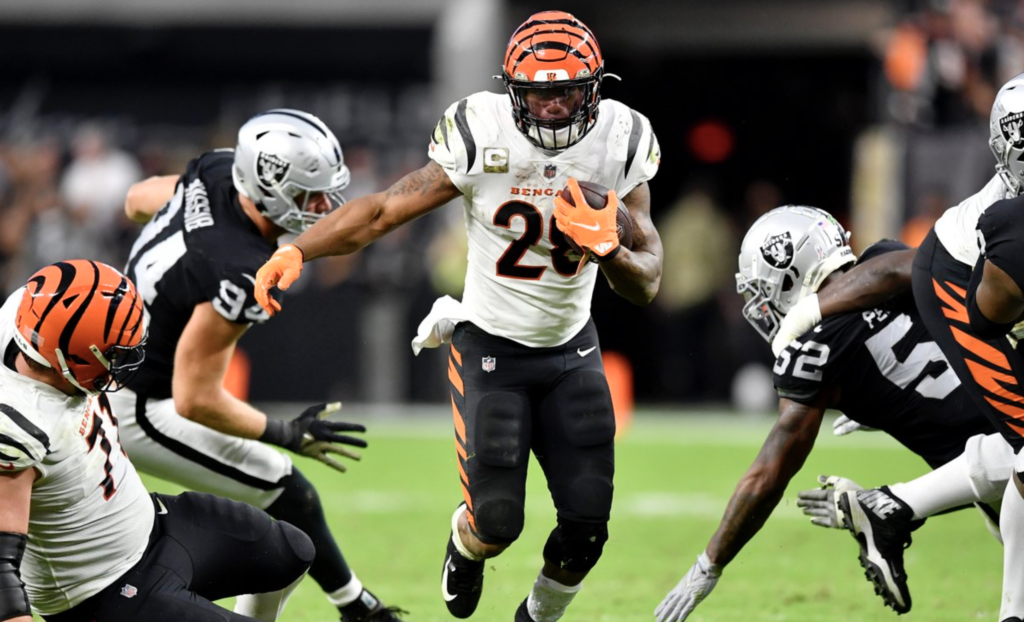 Finally, on Saturday at Paul Brown Stadium, the Bengals take the field in a playoff game for the first time since that fateful night of Jan. 9, 2016, when they had victory against the hated Steelers in their hands, only to see it ripped out Jeremy Hill’s hands.

The circumstances are much, much different this time. The Bengals aren’t starting a backup quarterback in this playoff contest. They’re starting the second-highest rated quarterback in the NFL, behind only Aaron Rodgers. At 108.3, Joe Burrow enters Saturday afternoon’s game not only has an impressive rating but is coming off two of the most prolific games back-to-back in NFL history.

Here's all of them: pic.twitter.com/tZRWV7XWmb

Before sitting out last week in Cleveland, Burrow passed for 525 yards and four touchdowns against the Ravens in the 41-21 win on Dec. 26. A week later, he completed 30-of-39 passes for 446 yards and four touchdowns in the division-clinching 34-31 win over Kansas City. That’s eight touchdowns, no interceptions with 971 yards of passing, completing 67-of-85 attempts. Starting with the Raiders game, Burrow has thrown 14 touchdowns and just three interceptions, none in his last four games.

“I would say I’ve just become a more all-around quarterback, understanding whatever the game asks of me to get the job done is what I’m going to go out and do,” Burrow said. “In that game (in Las Vegas), it was not forcing the ball, not turning the ball over and you know, we’re gonna be able to run the ball and get the win. And some games you’ve got to try to force some balls in there to go and score points. But with interceptions, sometimes you got to get a little lucky and sometimes you know, it’s a mix of getting lucky and making good decisions.”

The job now is to keep him clean against a Las Vegas Raiders defensive front that sacked him three times on Nov. 21 in Vegas and hit him five other times. The Bengals won that game 32-13 because they were able to establish the run in the second half, with Joe Mixon finishing with 123 yards on 30 carries and two touchdowns.

The Raiders are coming off one of the most emotional season-ending wins in recent NFL history, getting a Daniel Carlson field goal on the last snap of overtime that beat the Chargers, 35-32, eliminated Los Angeles and sent the Raiders and Steelers to the playoffs. The Bengals will hope to take advantage of a Raider team that played 70 emotional minutes of football with their starters on Sunday night and is traveling cross country to play a fully-rested Bengals team on a short week.

“We’ve kept the same routine,” Zac Taylor told me Thursday. “The messaging has been the same. It’s another home game. It’s going to be a great crowd because of our fans so really we’ve kept pretty consistent messaging with how we’ve kept it throughout the season.”

The Bengals sat all their regulars last week against Cleveland to protect and rest them. Little did they know it would also serve as a clear advantage against a Raiders team that was limited to walkthroughs this week to conserve energy.

The Bengals have played the Raiders twice in the playoffs, losing 31-28 in the Wild Card round in 1975, which turned out to be Paul Brown’s final game as an NFL head coach. In 1990, the Bengals won the AFC Central, beat Houston in the Wild Card round and lost to the Raiders, 20-10, in the LA Coliseum. That loss was the first of eight straight in the playoffs coming into this Saturday. This is the first time the Bengals will be playing a franchise for a third time in the playoffs, having faced the Steelers (0-2), 49ers (0-2), Bills (2-0), Chargers (1-1), Jets (0-2), Texans (0-2) and Colts (0-2) twice previously.

“Honestly, we’ve played in so many games that have felt like this over seemingly the last eight weeks that it’s all the same to us,” Taylor said. “I understand fans and the greater attention that’s brought upon this game outside the building. There’s fewer teams involved but for us, this doesn’t feel any different than playing the Raiders for the first time or playing Pittsburgh or playing Baltimore or playing Kansas City or Denver, San Francisco or LA (Chargers).

“They’ve all felt the same, kind of feel like you’ve got to work your tail off to prepare because we’re playing good football teams. That’s what you see at practice. They players are loose because I think there’s just a confidence there of what they’re being asked to do, their ability to do it and again, the team is in good spirits right now.”

Joe Burrow: The chess match between Burrow and Raiders defensive coordinator Gus Bradley will likely be where this game is won and lost. Bradley is going to try and do what he did on Nov. 21, minimize Ja’Marr Chase, Tee Higgins and Tyler Boyd and their downfield explosive plays. Burrow will likely take his shots, but he needs to be practical, like he was in November. How will Burrow play it with his three amigos, Chase, Higgins and Boyd? Will he take what the defense gives him underneath or take shots deep early?

Maxx Crosby and Yannick Ngakoue: These two have the chance to wreck any game plan. They got after Burrow on Nov. 21 for a sack and a hit apiece. Crosby had two sacks, four quarterback hits and six tackles in the Sunday night win over the Chargers. Ngakoue, on the other hand, played 75 snaps and didn’t have a single tackle, sack or quarterback hit. Still, he is a pass rushing force the Bengals have to account for. Don’t forget about Clellin Ferrell, Johnathan Hankins and Quinton Jefferson in the middle of the defensive line. The Bengals have to be stout over the ball to have sustained offensive success Saturday.

Joe Mixon: The Pro Bowl back had 26 yards on 11 carries in the first half on Nov. 21. The Bengals kept with it in the second half, and he exploded for 97 on 19 carries in the second half. The plan here is to not wait until the second half and get him rolling to start the game. The offensive line must set the tone early on, and that simply means being physical. This will be the best way to offset the impact of Crosby and Ngakoue.

Bengals jump ahead of the Raiders 10-6!

Derek Carr: The Raiders quarterback is fearless and dangerous when given time to throw. The Bengals defense in this game starts with making sure where tight end Darren Waller and slot receiver Hunter Renfrow are at all times. They have the personnel in the secondary to ensure that, likely starting with Tre Flowers on Waller and Hilton on Renfrow. It was a mixed bag in November, with Waller going for 116 yards on seven catches. Renfrow had four catches on four targets but only 30 yards.

Trey Hendrickson: Get the Raiders in third-and-long and turn their best pass rusher loose. If the Bengals are comfortable enough, this might be a game where Lou Anarumo uses Mike Hilton to slot blitz Carr and get him off the spot. Anarumo has had a terrific season mixing and matching his deep and versatile personnel. Hendrickson’s productivity up front has been great and Larry Ogunjobi and D.J. Reader have been beasts in the middle.

Josh Jacobs: Jacobs was held to just 37 yards on nine carries in November. He’s been much more productive of late, including 132 yards on 26 carries against the Chargers Sunday night. One thing the Raiders might try and do is play a little keep away to keep Burrow off the field and run the ball more. But that might play into the Bengals hands. While ranked 26th in the NFL in pass defense yards allowed (248.4 YPG), the run defense is another story. Thanks to Ogunjobi and Reader, the Bengals have been good stopping the run this season, with one exception being the Nick Chubb game on Nov. 7 at PBS. The Bengals are ranked fifth in the NFL in run defense, giving up just 102.5 yards per game.

Evan McPherson had a terrific rookie regular season, capped by his third game-ending field goal on Jan. 2 against Kansas City that clinched the AFC North. McPherson enters his first postseason game having converted 28-of-33 field goals and 46-of-48 touchdowns. Most impressively, he was 9-of-11 from 50-plus. It’ll be cold Saturday evening so that might be a factor in how he is used from longer distance. That’s something he and Darrin Simmons will discuss at length in pregame Saturday.

While McPherson is a newbie to the playoffs, Kevin Huber most certainly is not. This will be the sixth postseason game for the University of Cincinnati product. He finished this season just above his career net average (40.2 yards), coming in at 41.0. Huber has had just one touchback in 26 career postseason punts, and 10 inside the 20. Both are very impressive and could come in handy again against the Raiders.

If any of my followers in the UK are not doing anything on Saturday night from 9.30pm, please give a cheer for my @Bengals in the playoffs v Raiders. I am sure you can feel my pain as a fan looking at this… 👇🏻😳 #RuleTheJungle pic.twitter.com/PvUe8coVqf

Daniel Carlson tied New England’s Nick Folk with the most points in the NFL this season with 150. He had a NFL-leading 40 field goals and finished 40-of-43. He was 30-of-33 in extra points.

The Bengals check all the boxes in terms of personnel and intangibles coming into their first playoff game in six seasons. They have the quarterback, the wide receiver, the running back and the defensive depth to handle a Raider team that played 70 minutes of intense football six nights earlier. The Bengals need to take advantage of their fresh legs from last week’s rest and take it to Vegas early and often. The Bengals offensive line needs to step up with attitude and make some holes for Mixon while giving Burrow enough time to stand in the pocket and deliver to his weapons. Zac Taylor, making his playoff debut as a head coach, simply needs to put the game in his best players’ hands and let them do what they do. At the end of the night, we all should be sending those texts about the Bengals winning a playoff game.