W2L4: How Bengals Fend Off Browns In Critical Showdown For Both Teams 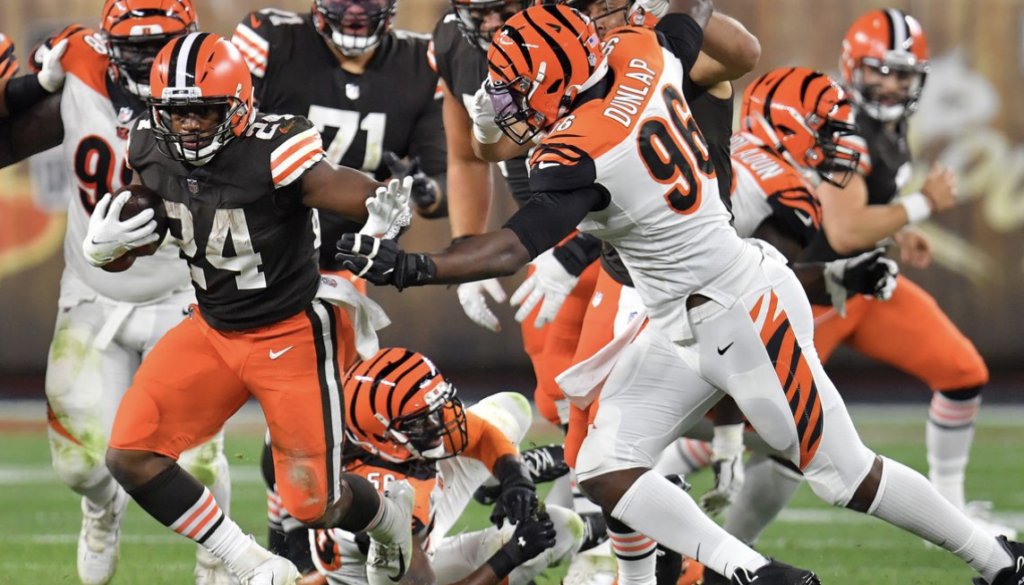 CINCINNATI – Nothing like a critical AFC North divisional battle to re-focus your energy after a massive letdown and fourth-quarter failure against an inferior opponent.

When the Bengals host the Browns Sunday at PBS, the hometown team will have a chance to accomplish a number of things: Rinse the disgusting taste of a 34-31 loss to the Jets out of their mouth, head into the bye with a 6-3 mark that puts them squarely in the second half playoff picture and improve to 3-0 in the division.

Those carrots should be enough to ensure the Bengals come out with razor-sharp focus against a team that will be just as desperate – or more so – to keep their playoff aspirations in the realistic realm.

"You live in Cincinnati!"

The Battle of Ohio 🔜 11/7 on CBS pic.twitter.com/iYxL1kIKEG

Much of the talk this week in Cleveland has been about Odell Beckham Jr. not being targeted in the Browns offense. His father even took to Instagram to point this out. But the Browns were having none of it and negotiated his release on Friday. He will be one weapon the Bengals won’t have to be concerned about this week.

The game is being prominently featured on CBS as the lead broadcast team of Jim Nantz and Tony Romo will be calling the action with sideline reporter Traci Wolfson also on the beat.

Myles Garrett and Jadeveon Clowney: When the Browns re-built their defense in the offseason, bringing in Clowney to pair with Garrett on the defensive line was a big part of the rebuild. The Bengals offensive line will have its hands full in trying to contain both of these sack machines and make sure Burrow is protected. Look for more quick releases from Burrow and perhaps bootlegs to try and keep Garrett and Clowney off balance.

Hakeem Adeniji: Coming off a pectoral injury suffered back in spring, the 6-4, 300-pound second-year offensive lineman could play a significant role in this game. Brian Callahan said Thursday that he could play guard as well as tackle. Adeniji was activated to the active roster on Wednesday and has been practicing for the past three weeks since being cleared to practice. It’s entirely possible we see Adeniji, who was taking reps at right guard this week, replace Jackson Carman, who continues to struggle badly in his rookie year to find the consistency needed at the NFL level. Zac Taylor conceded Friday that the right guard spot has been one the team has not been able to nail down, with Carman, the injured Xavier Su’a-Filo and Trey Hill already getting turns there. If Adeniji starts, he will become the fourth right guard this season for the Bengals alongside Trey Hopkins, who himself has had issues in pass protection this season.

Joe Burrow: If he has time, this could be a big day for Burrow, if only because the Browns just don’t give up much on the ground. They yield just 84.3 yards rushing per game, third-best in the NFL. This could be a good game to get tight end C.J. Uzomah involved, especially in goal-to-go situations, a place where the Bengals have struggled of late. Cleveland has yet to stop an opponent this year in GTG. The Browns also allow third down conversions 43.4 percent of the time, 25th in the NFL.

Nick Chubb: Simply put, make sure you wrap him up when he has the ball in his hands. Chubb, the second-round pick out of Georgia in 2018, is third in the NFL in yards per carry at 5.5. He only touched the ball 16 times for 61 yards last week in a loss to the Steelers. Kevin Stefanski figures to make sure he gets the ball more than that this week against a Bengals team that had its issues tackling against the Jets.

Screen Game: The Browns love to run the screen. And again, the Bengals had a terrible time staying in position last week against it. The Jets had run five halfback screens all season. They ran five against the Bengals with great success. The Bengals catch a break with Kareem Hunt on IR with a calf injury.

Watch out for tight ends: With Hunt out, tight ends David Njoku and Austin Hooper are Cleveland’s top two receivers. Njoku has 20 catches for 323 yards, 71 coming on a touchdown. while Hooper 18 for 169. Say what you will about OBJ not being a factor, fact is he was Cleveland’s leading wide receiver in catches (17) and yards (232). The Browns have just seven receiving touchdowns this season while their opponents have 17.

Donovan Peoples-Jones: The Browns don’t have OBJ but they still have DPJ, the receiver that put a stake in the Bengals with 11 seconds left on Oct. 20, 2020 with a sensational TD to beat the Bengals in a wild one, 38-34. He also leads the Browns with two receiving touchdowns, accounting for two of the seven this season.

MAYFIELD TO PEOPLES-JONES. #Browns have the lead with 11 seconds left!

Evan McPherson converted his only field goal chance last week against the Jets and is now 10-of-13 on the season. He’s also connected on all 26 extra-point conversions. McPherson has two game-winning kicks as time expired this season and two more right before halftime in Detroit and Baltimore.

Kevin Huber has a 41.1 net yards average, which is tied for 16th in the NFL. Huber has four touchbacks in 33 punts.

Chase McLaughlin has missed just one kick this season. He’s converted all 18 PATs and is 11-of-12 on field goals, including a perfect 4-for-4 from 50-plus.

Jamie Gillan has only one touchback in 24 punts this season. His 40.8 yards net average is tied for 19th in the NFL this season.

The Bengals had better respond the right way in this one and history so far this season is on their side. They came out after a hideous performance in Chicago and handled business in Pittsburgh, clearly showing their superiority. After a heartbreaking loss to the Packers, they tore apart the Lions but had to wait until the second half to really do so, thanks to their own mistakes. Now, after a horrid fourth-quarter collapse that proved those red zone failures deadly, the Bengals must regroup and perform against their archrivals up I-71. Cleveland is banged up and their leading wide receiver is no longer on the roster. If the Bengals tackle, defend the screen and keep Burrow from too many introductions with Myles Garrett and Jadeveon Clowney, they win, which is all WhoDey Nation wants.