W2L4: How Bengals Find A Way Against Aaron Rodgers, Packers

Early offense, sellout crowd should all boost Bengals in battle against the Pack. 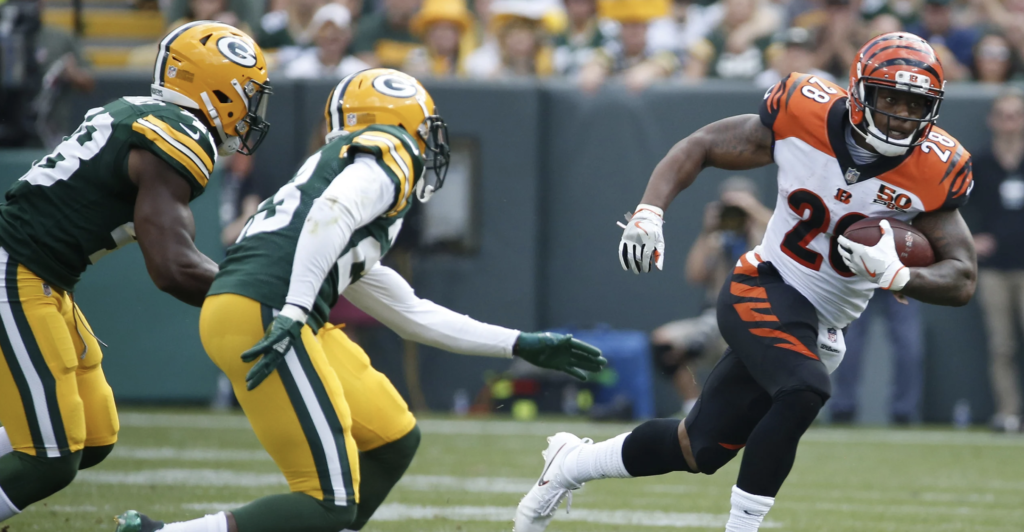 CINCINNATI – To quote Joe Burrow, it’s time for the Bengals to put their big boy pants on and play some four-quarter football against one of the best.

To beat Aaron Rodgers and the Green Bay Packers Sunday at a jam-packed Paul Brown Stadium, the Bengals will have to play a game filled with big defensive stops, explosive offensive plays and discipline on both sides of the ball.

Everyone remembers the last time Rodgers paid a visit to Paul Brown Stadium. It was Sept. 22, 2013 and the Bengals jumped out 14-0. Then they fell behind 30-14 as Rodgers picked them apart. But Andy Dalton led the Bengals back to within three, before Terrence Newman returned a fumble for a score on fourth-and-inches in a 34-30 win.

Who remembers being nervous about Rodgers having that much time on the clock, then LOSING THEIR MINDS when you realized it was a fumble being returned for a TD?#Bengals | #RuleTheJungle pic.twitter.com/H3N730uwjF

If the Bengals can pull off the win as a home underdog, they will be 4-1, their best start since the 2018 team opened 4-1 and then the roof caved in, going 2-9 the rest of the way. This roster is filled with more big-play weapons on both sides of the ball and a rookie kicker with a booming leg that has already kicked two game-winning, last-snap field goals.

Thanks to Burrow, they rescued what could’ve been a disastrous home loss to the Jaguars on national TV and gave themselves some good mojo heading into their mini-bye. They also used the break to get healthy, with Tee Higgins expected to return while Chidobe Awuzie, Jesse Bates III and Ricardo Allen are also expected to be back for the Stripes.

Trey Hopkins is managing knee soreness but is expected to suit up while Larry Ogunjobi was battling some illness on Friday and was held out due to an abundance of caution.

The biggest question is the status of Joe Mixon. He didn’t practice all week but Zac Taylor said Friday that he is willing to wait till the last second to see if his star running back has healed enough from tweaking his ankle in the fourth quarter against Jacksonville to give it a go against the Packers.

It’s been a big week for Bengals Jeopardy. Much of the talk this week has centered on how Joe Burrow and the Bengals offensive minds like Zac Taylor, OC Brian Callahan and QB coach Dan Pitcher compete for bragging rights in prep meetings thanks to wide receivers coach Brad Kragthorpe, serving the role of Alex Trebek.

“That’s just something we do,” Burrow explained. “Brad makes a Jeopardy game for the game plan for whatever defense we’re playing, personnel. It’s just a fun thing we do the night before games to kind of prepare us.

“We have a bunch of different categories, whether run game, pass game, third down, red zone, defensive scheme, personnel. It’s a good refresher before the game.”

Great time talking #Bengals vs. Aaron Rodgers Packers with @JayMorrisonATH Episode 12 @JungleRoarPod and can Joe Burrow keep it up against one of the best? LISTEN here: https://t.co/wlCzda6BxN

As the Bengals get ready to play one of the bigger games in the Zac Taylor era, here are some categories to keep an eye on:

They were close to doing exactly that against Jacksonville, driving to the Jags 28 before an offensive pass interference against Ja’Marr Chase wiped out a big gain inside the 10. Evan McPherson then missed his first field goal in his rookie season from 44 yards and Jacksonville gained momentum for the rest of the first half. That obviously can’t happen with Aaron Rodgers on the other sideline. “We can’t start slow the way we did last week,” Burrow said. “If we start slow, like that, we’ll be down 21-0 before we can blink. So, we’re gonna have to come out fast.”

If he plays how effective will he be. He didn’t practice all week and many coaches prefer their players to go at least one practice with intense pace to try and simulate game action. Mixon might be different. If he’s good to go with rest, he knows the offense and can be trusted to make his key reads and go. If he doesn’t play, Samaje Perine should pick up the running load as he did in 2020. Chris Evans is also a candidate to make a bigger impact in this game, though he saw just two offensive snaps against Jacksonville.

In a word, depleted. The biggest loss is shutdown corner Jaire Alexander, who injured his shoulder last Sunday vs. the Steelers. Chandon Sullivan is likely to fill his void. This is something that Burrow should be able test early and often with the likes of Chase and the return of Tee Higgins. Watch for the Bengals to also test the Packers linebackers. Both Za’Darius Smith and Chauncey Rivers were placed on IR this week. This could mean big things for C.J. Uzomah and Drew Sample, and possibly Evans.

Tee Higgins was putting up big numbers before Akiem Hicks landed on him in Week 2 and dinged his left shoulder. He, along with Chase and Tyler Boyd, figure to test the new-look Green Bay secondary early.

When the Packers have the ball:

Defensive coordinator Lou Anarumo made a point this week to his defense that the future hall of fame quarterback needs to “earn everything” on Sunday. He’s a great player who’s going to make great plays, just make sure you’re not watching the names on the backs of jerseys. In other words, keep EVERYTHING in front of you.

Asked Lou Anarumo the defensive philosophy heading into Aaron Rodgers week. "Don't give them anything for free" Make him earn everything #Bengals pic.twitter.com/53XIDKld9Y

Comes into the game second in the NFL in receptions (31) and targets (45). Whether it’s Awuzie (if he plays) or Waynes, it’s going to be a busy day for them. Rodgers is going to find a way to find Adams. Will Anarumo plan to bracket? Will the corners travel with Adams? Will the Bengals play more zone or Tampa-2 this game with deeper safeties?

For as much as the Packers rely on Rodgers, Aaron Jones and A.J. Dillon represent two of the more dynamic run tandems the Bengals will face. Jones is an all-around back who can do it all – and has – while Dillon is 6-2, 250 pounds and a fierce downhill runner. Another big chance for Logan Wilson, with some help from Germaine Pratt, to shine in this one. Dillon has only carried the ball 30 times in four games but is averaging 4.53 yards per rush.

If Chidobe Awuzie returns, then the Bengals should have their full complement in the secondary for the first time. Awuzie, Waynes, Vonn Bell, Jesse Bates and Ricardo Allen will all get a chance to help contain Rodgers and possibly lure him into a rare interception. Keep an eye on Larry Ogunjobi. He’s been a beast upfront for the Bengals. If he’s recovered from his illness of Friday, then the Bengals should have a good chance at rushing or disrupting Rodgers up the middle.

Yes, Packer fans travel very well and there will be plenty of cheese heads among the 65,000 inside Paul Brown Stadium. But the electricity of the Bengals fans if the home team is playing well early could be a huge factor as we witnessed early in the Vikings game and in the second half against Jacksonville. The crowd is suddenly a disruptive factor in the Bengals favor when they’re on defense. Rodgers has seen – and heard – it all but that doesn’t mean a loud Bengal crowd will be easy for him. The Bengals are all about making it as uncomfortable as possible and another involved crowd Sunday will go a long way in that mission.

Evan McPherson missed his first-ever kick in the Thursday night game, a 43-yarder that he pulled wide left. But he more than redeemed himself with the made 35-yarder at the gun for the win. He’s made all 11 PATs and is 5-of-6 on field goals.

Kevin Huber has put seven of his 17 punts inside the 20 while his net average continues to rise, now standing at 42.6 yards.

Mason Crosby is one of the game’s most reliable. This year has been no different. He’s converted all six field goal attempts, including two from beyond 50 yards.

Corey Bojorquez is a left-footed punter who’s booming them at a rate of 47.5 yards and a net average of 42.9. He doesn’t have a touchback this season while placing five inside the 20. Bojorquez and Huber are eighth and ninth, respectively, in net average in the NFL this season. The key here to watch Sunday is Darius Phillips. The fourth-year punt returner has struggled at times getting a feel and making positive yardage in his return, putting himself into negative or minimal return situations. He has 10 returns this season for an average of just 8.7 yards. He also has seven fair catches.

The Bengals need to find their offense in this game and the short-handed Packers defense should allow them a chance to make more plays, especially early in the game. Lou Anarumo has done a good job this season of making mid-game adjustments in his defensive schemes and he’ll, of course, need to be on his toes again Sunday with Aaron Rodgers in the building. The combination of Tee Higgins’ return, the full complement of Bengals defensive backs and a banged up Packers defense should spell good things for the home team – and a win.