W2L4: How Bengals Fly By Falcons In Return To Home Nest of Paycor

Bengals look to reserves to pick up slack for Logan Wilson and Josh Tupou. 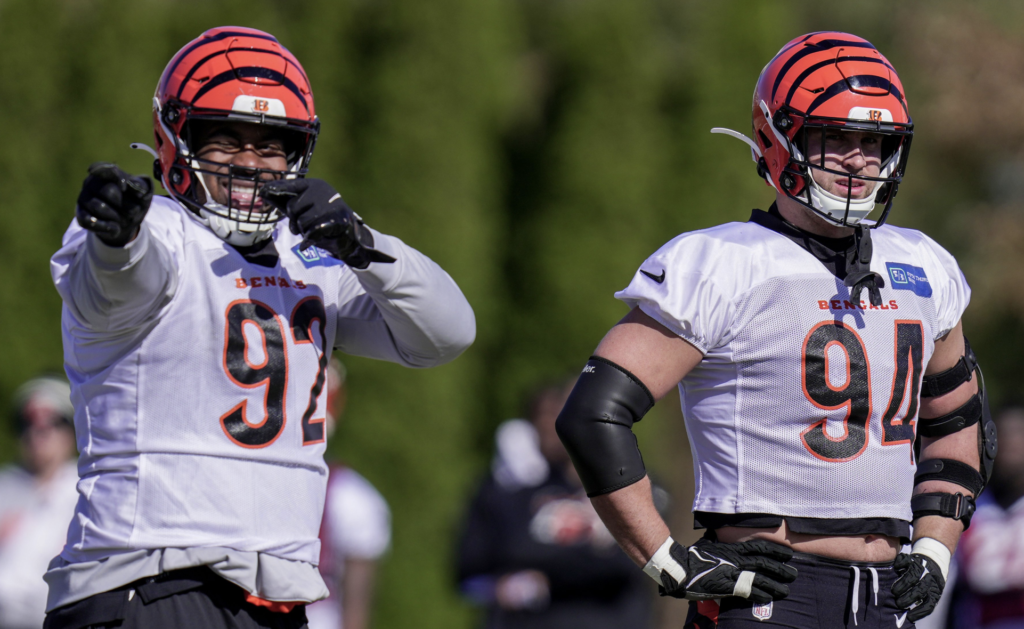 CINCINNATI – Have the Bengals finally found something in their offensive line? Could it spark the Bengals to more points in the coming weeks?

They certainly hope so on both counts as the Bengals return home for just their third game at Paycor Stadium this season and just their second home game in the last six weeks.

This week, the Bengals face a Falcons team that boasts one of the league’s top rushing offenses, as Atlanta’s 165.2 yards per game on the ground rank third in the NFL. The Falcons have won three of their last four games after an 0-2 start to the season.

Atlanta’s three losses are very similar to the Bengals in the fact that all were decided by one possession, including 27-26 to New Orleans on opening day, 31-27 at the Rams and 21-15 at Tampa Bay.

“It’s a team that’s in a very similar position to where we are,” Taylor said. “They’re coming off a good win against a good team. They’re a well-coached football team. They’ve got talent in all three phases that we’ve got to be prepared for.”

Last Sunday, Atlanta surprised San Francisco, 28-14 at home. Sunday’s game will be the first matchup between Cincinnati and Atlanta since 2018. The Bengals own a 9-5 lifetime advantage, including wins in the last two meetings. Andy Dalton found A.J. Green for a last-second touchdown in the last meeting between the two, giving Cincinnati a 37-36 win in 2018 in Atlanta.

Atlanta features former UC quarterback Desmond Ridder, who has been active in the first six games but has yet to take his first NFL snap.

The Bengals offense picked up last week, in part, because of success running RPO looks with Joe Burrow. The Bengals have been more efficient running the ball in the last three weeks, running at 5 yards a clip against Baltimore and 5.1 against New Orleans. The runs out of the shotgun and pistol have given the Bengals and Burrow a count or two more to read and freeze the defense, allowing for better lanes to open.

This led Burrow to suggest after Sunday’s win over the Saints that the Bengals had found an identity on offense. Offensive coordinator Brian Callahan noted some of the trends he’s starting to see on tape.

“I think we’ve we’ve gotten a pretty good feel for where our guys strengths lie, what they do well, and some of the things that maybe they don’t do as well that we tend to stop leaning on,” Callahan said. “So, you start trying to lean into your strengths. And it happens like this every year where, you know, you learn a little bit about your team, especially the amount of new players we had up front, learn how they play together, what they do well together, and how, how they can help us move the football.

“And some things you try and (use) trial and error or some things you know you’re going to be good at. But we’ve kind of found some things that we feel really good about our guys strengths and how they do, how they perform and doing those things schematically. So, that’s a good thing to start to feel like we’ve zeroed in on.”

The feel-good moment of pregame takes place when Devon Still and his daughter Leah lead The Who-Dey chants as Rulers of the Jungle.

Leah and Devon Still are this week's Rulers of The Jungle!

Devon, our former tackle, and his daughter, Leah, represent every aspect of being a fighter. We are so happy to have them back in The Jungle 🧡

Here’s what to look for in Game 7:

This is where the Falcons figure to enjoy their only true advantage. Watch out for the jet sweeps against man looks from Lou Anarumo. The Bengals were burned badly by poor tackling (eight misses) last week and need to shore that up this week against a Falcons offense led by Marcus Mariota, who no doubt would like to take a page out of the Taysom Hill playbook and run RPOs against Cincinnati’s D. Led by rookie Tyler Allgeier, the Falcons are averaging over 165 rushing a game. The rookie out of BYU has totaled 235 yards on 54 carries (4.4 ypc) through six games. The Bengals are playing another game without DJ Reader and will be without Josh Tupou, who injured his calf last Sunday. The Bengals will look to BJ Hill and Jay Tufele to help stop the run, with Tyler Shelvin or Domenique Davis activated from practice squad, and rookie Zach Carter behind them in terms of depth.

There’s been a lot of talk about the improved Bengals offensive line after two solid weeks, especially last week in New Orleans with the way La’el Collins handled Cam Jordan. This week, there’s a different challenge. Grady Jarrett is one of the game’s most disruptive inside rushers and will test Ted Karras, Alex Cappa and rookie Cordell Volson. Jarrett leads the Falcons with 3.5 sacks, five tackles for loss and seven QB hits. Wouldn’t be surprising to see double teams or help on Jarrett throughout the game.

The Falcons are allowing 281.2 yards per game through the air, next-to-last in the NFL. This is a game where the Bengals and Joe Burrow should be able to move the ball through the air. There’s a catch, though. With Ja’Marr Chase, Tee Higgins and Tyler Boyd expected to have big games and tight end Hayden Hurst facing a former team for the second time in three weeks, the Bengals cannot afford to have too many unproductive drives. The Falcons, through their ground attack, like to play keep away.

After injuring his right shoulder last Sunday, the Bengals will turn to Akeem Davis-Gaither to fill the spot while Wilson continues to heal. Davis-Gaither has played 117 defensive snaps this season, or 29 percent of the time on the field. Davis-Gaither, in his third season, filled in admirably Sunday as the defense stiffened on the final two Saints drives, forcing a New Orleans three-and-out that led to the game-winning TD pass to Ja’Marr Chase. The defense also held on after New Orleans crossed midfield and held on at the last second to close out the 30-26 win.
Davis-Gaither, a key part of special teams, has missed just one tackle this season in his 117 snaps, per Pro Football Reference. Zac Taylor said Markus Bailey could also see some reps in at weak side linebacker along with Davis-Gaither.

“He’s a guy we fell in love with at the Senior Bowl from (Appalachian) State,” Taylor said. “We loved him from day one. Just his mentality, his character, the way that he practices his retention and the classroom and then how he just continues to improve. I think he’s done a good job being physical this year. He’s always been kind of a lighter guy playing that position and he’s really done a good job. Just with the physical aspect of it and playing fast and physical.”

This figures to be a heavy Tre Flowers game against one of the most versatile tight ends in football. Pitts, the fourth overall pick who went one pick ahead of Ja’Marr Chase in the 2021 draft, has just 13 receptions this season for 169 yards and one touchdown. Drake London, their first-round pick from USC, leads the team with 25 receptions for 306 yards and two touchdowns. Pitts and London are two explosive receivers but the Bengals secondary should be up to the task against an offense that is based on the run.

The Bengals simply have more weapons and a better defense in this matchup. Barring turnovers, this is a game the Bengals should capitalize on a strong passing game, and Hayden Hurst as the tight end could have a huge game against a team that declined his fifth-year option and made him a free agent last offseason, allowing the Bengals to scoop him up. George Kittle had eight catches for 83 yards last week. David Njoku caught five balls for 73 yards for the Browns two weeks earlier. Tyler Higbee caught seven passes for 71 yards for the Rams in their win. You get the drift. The defense needs to improve its RPO run performance from last Sunday, when they allowed the Saints speed to get to the outside too easily and missed eight tackles in the process. If the Bengals shore that up, this one should not be in doubt.