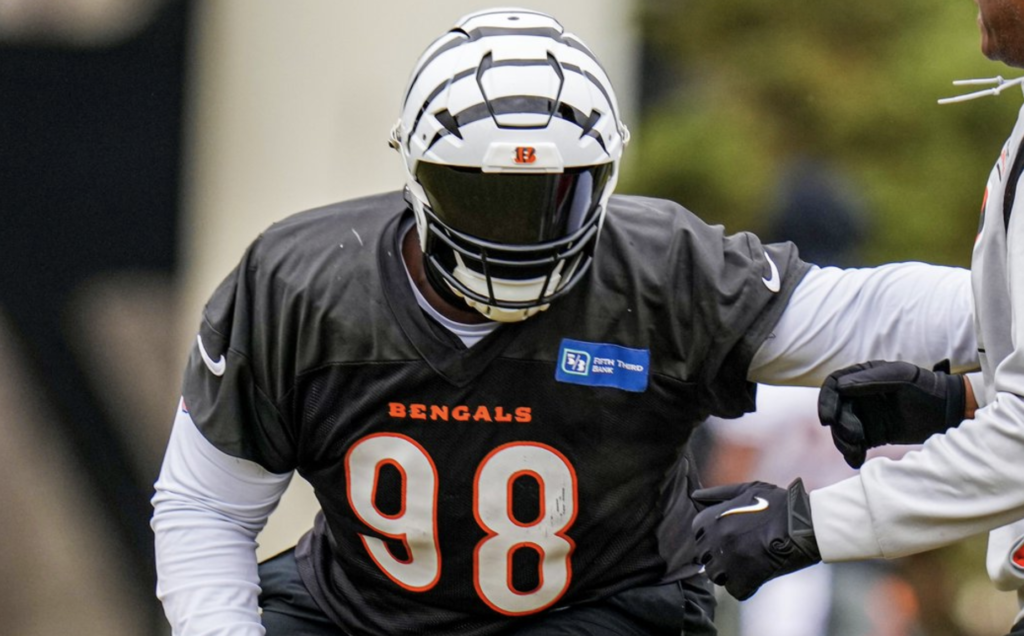 CINCINNATI – The Bengals begin the second half of their season with the same team they opened. Only this time, they are hoping for and expect much better results.

Pittsburgh prevailed 23-20 on the last play of overtime and the Bengals were off on the wrong foot. That hangover leaked into Week 2 and a 20-17 loss to the Dallqs Cowboys.

But since then, the Bengals have won five-of-seven and seem to be finding some footing.

The win over Carolina was highlighted by a historic performance from Joe Mixon, who recorded a career-high 211 yards from scrimmage and a team- record five total TDs (four rushing, one receiving). Mixon became one of six players in the Super Bowl era (1966-present) with at least 200 scrimmage yards and five total TDs in a game, and one of just three players with at least four rushing TDs and one receiving TD in a game.

“It feels great to be able to have a special game,” said Mixon, who was named AFC Offensive Player of the Week. “I knew at some point the dam would break, and it did. I’m very excited for my teammates. The way these guys come to work and the trust we have, it’s a blessing.”

Mixon, along with efficient play from Burrow and two forced turnovers from the Bengals defense, paved the way for a 35-0 halftime lead that tied for the second-largest advantage at the break in team history. Burrow completed 22 of 28 passes for 206 yards and a TD, before being rested late in the third quarter with the result in hand. The third-year signal caller who ranks in the top five leaguewide in passing yards, passing TDs and passer rating, felt it was the team’s most well-rounded performance to date.

“It was the first complete game of the year,” Burrow said. “It’s how we expect to play every week. Run game, defense, pass game, it was all clicking today. We have to find that sauce and keep it in our back pocket for the rest of the year.”

At 5-4, the Bengals hold an identical record to last year’s team going into the second half of its schedule. The 2021 Bengals proceeded to win five of their next seven games to capture the AFC North, before making a memorable run to Super Bowl LVI.

Perhaps most importantly, the Bengals are getting two critical pieces back on defense. Defensive tackle DJ Reader returns after a six-game absence due to a sprained MCL in his left knee, suffered in Week 3 against the Jets. And after missing the win over the Panthers with a broken left pinky finger, nickel corner Mike Hilton returns.

Weather will be a factor, as temperatures are expected in the upper 20s for kickoff, with some wind making it feel like the upper teens. It will be the coldest game of the year for the Bengals to date. There is no precipitation in the forecast.

The Steelers are only allowing 108 yards on the ground per game, good for sixth in the NFL. Cam Heyward and Tyson Alualu have been rock solid in the middle. Mixon has traditionally enjoyed big games against the Steelers, averaging over five yards per carry. Mixon should get his looks, where one or two-yard gains could turn into more.

Cam Heyward broke through against Cordell Volson on Volson’s first rep in the NFL and sacked Joe Burrow. It was a sign of things to come as the Steelers sacked Burrow seven times that day. TJ Watt had a remarkable interception on the edge when he jumped in the air and picked off a Burrow pass at the line of scrimmage. Alex Highsmith had three sacks.

Joe Burrow’s first pass of the season was picked off by Minkah Fitzpatrick and returned 31 yards for a touchdown. Fitzpatrick is one of the elite safeties in the NFL. He missed last week against New Orleans with an appendectomy. But his was not as serious as Burrow’s in late July. His recovery has been fast and Fitzpatrick was back at practice this week. He’s expected to play. If Burrow gets time, he should be able to take advantage of a secondary that is allowing 263 yards a game, third-most in the NFL this season.

The Bengals veterans like Trey Hendrickson, Sam Hubbard, DJ Reader, Mike Hilton and Jessie Bates should be able to have a field day against rookie quarterback Kenny Pickett, who is still feeling his way through his rookie season. The Steelers are averaging just 307 yards per game, 28th in the NFL. Focus on Najee Harris and Jaylen Warren in the backfield, don’t let them run wild and the Bengals should be able to get the ball back in the hands of Burrow often.

This has been a drama the Bengals created because they are concerned that Kevin Huber might finally be hitting that wall all punters hit with age. The 37-year-old is averaging just over 37 net yards per boot this season. Second-year punter Drue Chrisman has been taking snaps all week. Maybe Huber gets one more go round in Pittsburgh this week before a change is made. Maybe Huber holds onto his job with a good performance. Or maybe it’s time to hand the reins over to Chrisman. We’ll find out soon enough on Sunday.

The Steelers are a bottom-rung team in the NFL. The Bengals would have easily defeated them on opening day if not for the five turnovers and creating none on the defensive side. This should be different and the Bengals need it to be with Tennessee and Kansas City on the docket the next two weeks. The Bengals go into the cold and grind out an efficient win that keeps their hopes alive to be relevant in the second half.