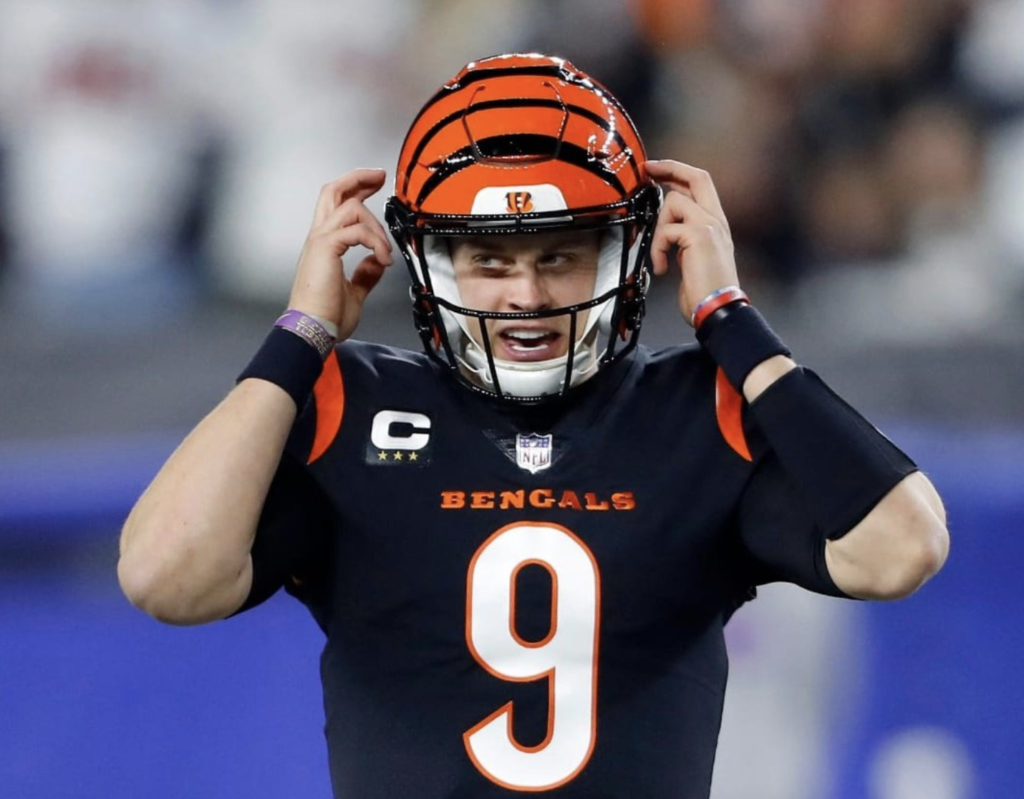 CINCINNATI — Real-life drama collides with NFL playoff football when the Bengals and Bills meet Sunday for a ticket to the AFC Championship.

The two teams represent two cities that have been brought together and their fan bases bonded over the last five years.

On the last day of the 2017 season, Andy Dalton hit Tyler Boyd on fourth down for the game-winning touchdown in Baltimore, knocking the Ravens out of the playoffs and sending the Bills to the postseason for the first time since 1999. The Bills fan base – Bills Mafia – showed their appreciation by sending $442,000 to the Andy Dalton foundation.

On Jan. 2, Damar Hamlin collapsed on the Paycor Stadium turf and was heroically resuscitated at midfield. The two fans bases joined in prayer for his miraculous recovery and the nation donated $8.6 million to Hamlin’s foundation.

Now, with the humanitarian stories documented and told, all that’s left is for Hamlin to make an appearance before Sunday’s Divisional showdown and for the two teams to play a game that has been anticipated for months.

Last week, Baltimore was in position to break a 17-17 tie early in the fourth quarter when it drove the ball down to the Cincinnati one-yard line, before the Bengals’ defense stepped up and delivered arguably the most iconic play in Bengals history.

On third-and-goal, Tyler Huntley attempted to jump over a pile of linemen and reach the ball across the goal line, but he was met by Germaine Pratt, who held him up so Logan Wilson could knock it loose. The ball fell into the arms of Sam Hubbard. Hubbard, who sprinted 98 yards and outraced Ravens tight end Mark Andrews to the opposite end zone for the decisive touchdown.

“That play is going to be in Cincinnati Bengals history,” head coach Zac Taylor said. “I told that to Sam after the game. You understand the impact of that moment in a divisional game, home playoff game. That play will be remembered forever.”

The return – which has since garnered several nicknames including the “Fumble in the Jungle” and the “Hubbard Yard Dash” – was the longest fumble return for a TD in NFL postseason history, and the longest TD of any kind in Bengals postseason history. For Hubbard, who grew up rooting for the team and is in his fifth pro season, the idea of being in that moment was nearly impossible to imagine.

“You can’t even dream that one up,” Hubbard said. “It’s pretty special, but I was just glad to see my teammates’ faces because that was a battle. It was a tough-fought game. A lot of adversity, very physical. To make the play and be the guy to come through is an amazing feeling — not only for my teammates, but the fans as well.”

“It’s very satisfying, especially when you play a team like that,” Burrow said. “They’re so good at what they do, and to beat a divisional team for the second time in two weeks is tough.”

The Bills held on at home to beat the Miami Dolphins, 34-31, and advance to the Divisional round for the third straight season. Buffalo ranked second in points per game (28.4) as well as points per game allowed (17.9) during the regular season, and has won each of its last eight games dating to Week 11.

The Bengals and Bills have met twice before in the playoffs, with the Bengals winning both. This will be the first time they are meeting in Western New York. In 1981, Cincinnati prevailed, 28-21, also in the Divisional round at Riverfront Stadium.

On Jan. 8, 1989, the Bengals beat the Bills, 21-10, at Riverfront in a game highlighted by the “Ickey Shuffle” and a perfect play-action TD toss from Boomer Esiason to James Brooks. That win, also at Riverfront, sent the Bengals to Super Bowl XXIII in Miami.

The question is will the makeshift offensive line hold up? Hakeem Adeniji looked strong for eight snaps in that game. Max Scharping looked solid last week against the Ravens. But how will Jackson Carman do for an entire game protecting Burrow’s blind side? If the Bengals can run, like they did on the first drive of the second half vs. Ravens and against the Bills on Jan. 2, they can establish some play-action. This will dramatically relieve pressure from Carman, who has played in big games at Clemson and played in all four postseason games for the Bengals last year. He’s accustomed to the pressure and expect him to respond again.

The Bills quarterback is totally capable of coughing it up as he did last week against the Dolphins, giving Miami a chance that they wasted away on Skylar Thompson’s fourth-quarter interception. He threw two interceptions and fumbled twice, losing one. But of course, Allen is a beast, both with his legs and his powerful arm. The Bengals secondary must be sure never to give up on a play and think it’s over, both horizontally and of course, vertically with Stefon Diggs and Gabe Davis running up and down the field. Tight end Dawson Knox is a weapon in the red zone. If you ever need a reminder of how dangerous Allen can be on the run in the red zone, remember the touchdown dart to Gabe Davis as he was running out of bounds against the Patriots at Gillette Stadium on Dec. 1.

Burrow, if given time, could have some big strikes downfield to Tee Higgins and Ja’Marr Chase. Burrow has developed a reputation for looking off opposing safeties over his young career and that should come in handy as he faces one of the best in Bills safety Jordan Poyer. Burrow was on fire on Jan. 2 at Paycor, distributing the ball at will against the Bills secondary. Will that momentum carry over to Sunday? Or will the Bengals have a slightly different gameplan with their offensive line reconstructed.

Burrow and his offensive line will have to be in lockstep with each other on silent counts and cadence to handle the relentless crowd noise that will be greeting them at Highmark Stadium. The Bengals stressed it on Thursday and Friday this week at practice and center Ted Karras has a good knowledge of the crowd setting, having played there with New England and Miami in the AFC East. They were able to manage last year at Arrowhead against the Chiefs but it took them a good quarter to settle in. It’d be nice if they didn’t fall behind 21-3 this time around.

“We didn’t crank up the stadium the same way (as Arrowhead), but we feel like we’ve gotten good work, just really stressed our communication with our guys,” Zac Taylor said. “They have done a really good job of handling it. It’s a good thing. Ted has been in a lot of loud games, lot of road environments, he’s been in that division. It’s certainly helpful.”

The Bengals linebackers must be solid in their run fits and not allow huge chunk plays the way they did against the Ravens. But as we’ve heard this week from Jessie Bates, there’s a sense of relief that the Bengals don’t have to prepare for a triple-option threat in the Bills offense. If the Bengals linebackers can fill the gaps well, they should stand a good chance of creating second-and-long and third-and-long opportunities.

Last year’s wins at Tennessee and at Kansas City were the first road playoff wins in franchise history. To make it three in a row, the Bengals will have to play an airtight game in the blustery, cold conditions of Orchard Park in January. The Bills have lost only once in 14 playoff games at Orchard Park, a 30-27 defeat at the hands of the Jaguars in 1996. The Bengals have the weapons to test the Bills secondary underneath like they did on Jan. 2. The Bengals have shown great resiliency to find a way to protect Joe Burrow when they have to. And Burrow plays some of his best football when the odds are against him (Another Tom Brady trait in him). The Bengals red zone defense will find a way to create at least one Josh Allen turnover and that will be the difference.