Bengals can avenge last year's 34-31 self-destruction, and they must in order to get season back on track. 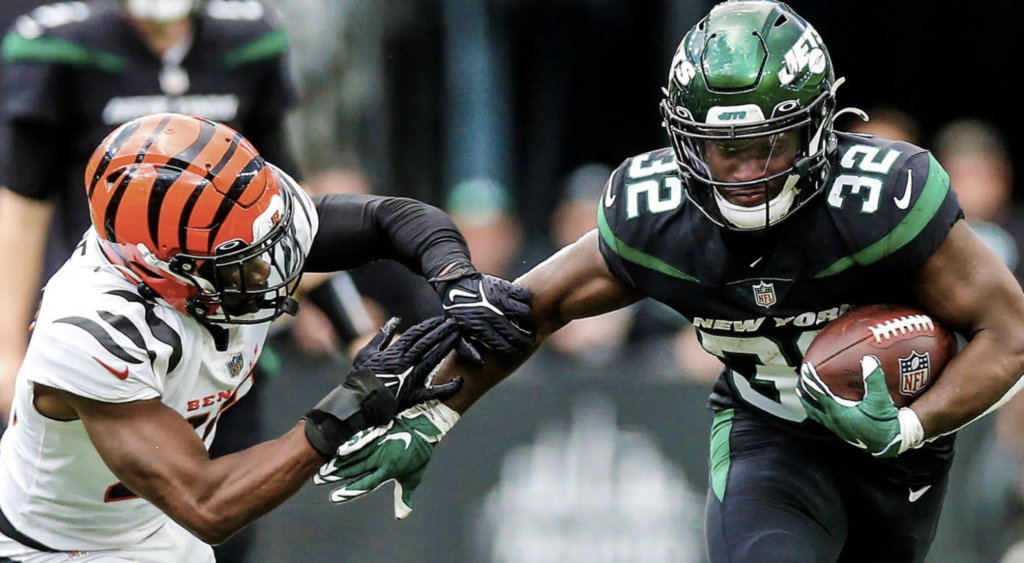 The Bengals will try to keep the Jets from running away from them late on Sunday in a rematch of last season.
Share
Facebook Twitter Email

CINCINNATI – There’s no understating the importance of Sunday’s game in the Meadowlands for the Cincinnati Bengals.

After losing to the Steelers (Mitch Trubisky) and Cowboys (Cooper Rush), it’s a must-have. Going 0-3 won’t eliminate the Bengals but it will kill all remaining optimism around the team and nose-dive the team two games behind the Browns (and Ravens if they beat the Patriots in Foxboro) in the AFC North.

With everyone around the Stripes this week saying there’s no panic, lose to Joe Flacco and the Jets at MetLife Stadium and you can install a big, red button in the middle of the locker room that everyone can punch.

“It’s frustrating for me, overall,” Joe Burrow said. “Everyone is frustrated but like I said we’re not panicking, two games in, we got 15 games left. Let’s all just take a deep breath and relax. We’re gonna be fine. We’re not worried about it.”

In spite of everything through two losses, a porous offensive line, a jittery quarterback and questionable game-planning at the end of the game, the Bengals are still installed as a six-point favorite. That’s because the Bengals have the better talent and have shown resiliency in both games, rallying from deficits of 17-6 and 17-3 to tie the game late in the fourth quarter.

“We’re never going to tap out,” said edge Sam Hubbard. “We’ve just got to get off to a better start, not put ourselves in those positions, and I’m confident we will.”

But they couldn’t force the key turnover or convert a key first down to keep potential game-winning drives alive.

And, oh yeah, through 130 minutes, they have yet to possess a lead in the 2022 season. Changing this would go a long way toward to earning their first win, though they did have a 31-20 lead with four minutes left in this same building last Halloween before letting that game slip through their hands.

Now, almost incredibly, they’re back in the same stadium fighting to not let any realistic hopes of getting back to the playoffs or winning a division slip through their hands.

The Bengals have no margin of error left to start this season.

Here’s what to look for in Game 3:

Zac Taylor said he is optimistic La’el Collins (back) can start this week at right tackle despite missing Wednesday and Thursday (pads) practices. If that changes, all eyes will be on Hakeem Adeniji, the sixth round draft pick from 2020 in his third NFL season. He was a healthy scratch for the first time in his career last Sunday against the Cowboys. Adeniji hasn’t started at right tackle since Week 10 of 2020 against Washington. Adeniji started the last nine games of 2021 at right guard. After Isaiah Prince was injured after the first preseason game against Arizona, Adeniji started at right tackle in the final two preseason games. You can figure the Jets will test whoever with former Bengal pass wrecker Carl Lawson on the right side, where the pressures on Joe Burrow have been frequent. The Bengals have not handled edge rushers very well to start the season, as T.J. Watt and Alex Highsmith teed off in Week 1 and Micah Parsons spun around the Bengals line again and again in Week 2.

"I like the way we're trending" Bengals offensive line coach Frank Pollack on his group. pic.twitter.com/QX4AEtvigT

Joe Burrow has been holding onto the ball too long in the pocket. It’s a generalization but an accurate characterization to explain why he’s been sacked 13 times and pressured 30 times in the first two games. Yes, the offensive line has not been good on the edges but that can be resolved by three things: Quicker releases on vertical (seam) or crossing routes earlier in games, the actual threat of a run game and not falling into second-and-long and third-and-long situations. The Bengals have failed in all three of these critical areas of the passing game. Pocket passers like Burrow usually have three seconds on average to get rid of the ball. Any longer, and they have to step or flee the pocket like Burrow has been doing too often. Burrow can certainly improvise, like he did on a perfect third-down sideline throw to Tee Higgins on the fourth quarter TD drive but relying on those plays is why the Bengals passing game is where it is after two weeks.

Burrow needs more time to pass because football fans need to see a genuine blue-chip battle between an elite receiver and a cornerback who Jets (rightfully) feel is the next coming of Darrelle Revis. Gardner has lived up to expectations in the first two weeks. He has been used all over the secondary by coordinator Jeff Ulbrich and head coach Robert Saleh. Gardner helped on tight end Mark Andrews in Week 1 and is capable of covering whoever he is placed on with his length and leverage, two of his skills that made him a top-5 pick in April. In Week 1 against the Ravens, he allowed two receptions for 19 yards on four targets in 29 coverage snaps. Chase had five catches for 54 yards and a long of 17. The Bengals have had just three receptions of at least 20 yards and none more than Chase’s 24-yarder against the Steelers. Chase had the longest last week of 19 yards. That needs to change this week.

Look on the bright side, Mike White is not starting this game. Last year of course, White lit up the Bengals for 405 yards on 37-of-46 passing, with three touchdowns while Flacco was inactive. White won’t be starting. Instead, the Bengals see a quarterback that has plenty of familiarity with Cincinnati. Joe Flacco is making his first start against the Bengals since a 34-23 Cincinnati win on Sept. 13, 2018 at Paul Brown Stadium. He is 9-11 in 20 starts with 21 touchdowns but 25 interceptions against Cincinnati. The Bengals have one sack and five hits in each of the first two games. Again, this number, like Burrow’s release time noted above simply has to improve. The Bengals have faced two mobile quarterbacks who have gotten the ball out of their hands quickly.

“We were the least penalized team, but we are finding some penalties this year putting them back in third-and-5 where you don’t get a chance to rush on third-and-5 because the ball is getting out. Third and 8, third and 10, third and 12, you get a chance to get a sack. Trey Hendrickson is now getting the attention that most great rushers get. A few times in the game he had the tight end, back and the tackle and still was able to get pressure. That’s what happens when you sack the quarterback as much as he has the last few years.”

This group of Jets receivers has been made over from last year and has been productive in the first two weeks. Wilson, the rookie out of Ohio State, is a name to keep an eye on in the slot as he’s matched up against Mike Hilton. Last week, he had 102 yards receiving and two touchdowns, including the game-winner in the closing seconds at Cleveland. Wilson has elite speed and the ability to separate in the slot.

The former Bengal has yet to catch a pass for his new team after the Jets signed him to a three-year, $24 million contract in the offseason. He wasn’t targeted in the Week 1 loss to the Ravens. He was inactive last week and has been limited this week with a hamstring injury. He certainly will push the Jets coaching staff to find a few snaps for him this week, that is if he can get on the field and is active.

This is an unreal throw by Mike White in the face of legit pressure. Anticipates where Braxton Berrios would end up. Unbelievable quarterback play here. 17-14 Bengals over #Jets at halftime. pic.twitter.com/p4j2OCaK1O

Pure desperation and talent should carry the day for the Bengals. They have won just once in the Meadowlands, and that was 23-22 on Sept. 11, 2016. Once. Between the old Giants Stadium (where the Jets moved into in 1984) and MetLife Stadium, the Bengals are 1-10 against the Jets on the road. The Bengals have lost all four road games against the Giants, bringing their lifetime record in Jersey to 1-14. The Bengals have the better cast and every reason to find a way to get the job done this Sunday. This time they’ll grab a 31-20 lead and not blow it.