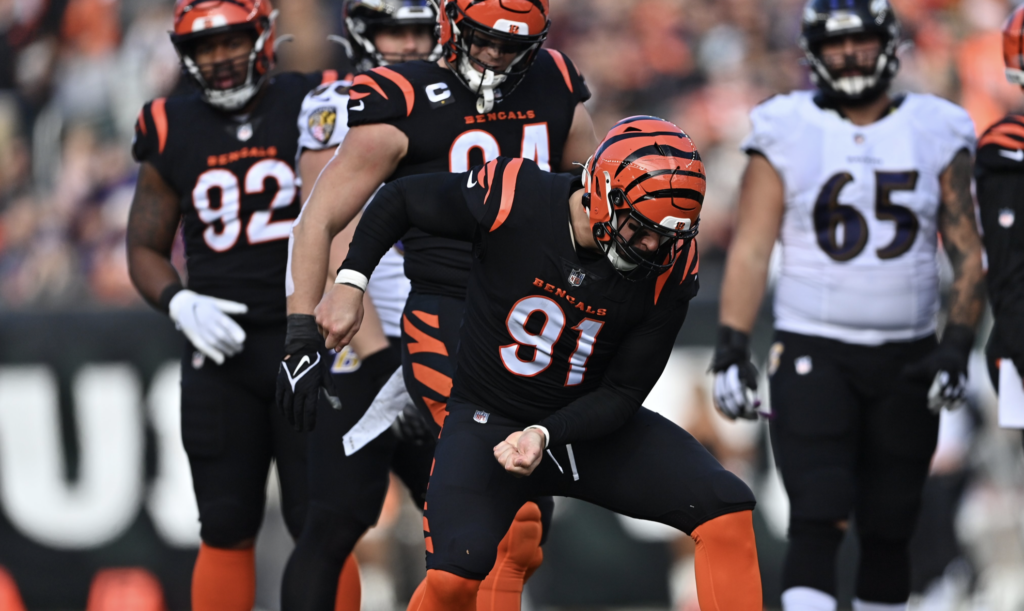 Trey Hendrickson (91) and the Bengals defense have a big lift in front of them Sunday in the Chiefs offense with Patrick Mahomes.
Share
Facebook Twitter Email

CINCINNATI – Everything the Bengals have worked for – as they say – is right in front of them. Literally, with one more win, the Bengals will clinch their first AFC North division title and playoff berth since 2015.

But that one win is going to take a pretty massive lift on Sunday.

The Bengals feel they have matured enough to take their shot and finish their business Sunday and not wait until a nerve-racking Week 18 in Cleveland.

The Bengals have been very competitive against the NFL’s best this season, taking the Packers to overtime and losing a game they nearly won twice. The have swept the Steelers and Ravens for the first time in the same season since 2009. They have won on the road against two franchises (Raiders and Broncos) that have traditionally beaten them down.

THAT'S A CATCH. @teehiggins5 has 128 receiving yards in the first half.

But this week against Patrick Mahomes and the Chiefs, they face the hottest and arguably most-skilled group they will play all year, and on an eight-game winning streak to boot.

The Bengals like to think they are pretty hot themselves, coming off a week in which their franchise quarterback threw for a team-record 525 yards, the fourth-most in NFL history. They put up 41 points and lit up the Ravens, 41-21, a victory that ticked off former Ravens linebacker Bart Scott so badly that he said Baltimore would put a “red dot” bounty on Burrow in the future.

Safe to say @BartScott57 isn't as high on Joe Burrow as the rest of our crew ?? pic.twitter.com/B5hGK5JzIh

That’s when you know you’re disrupting the apple cart in the AFC. When you beat a team so badly, their former stars start complaining that you’re running up the score when you stopped scoring with 10 minutes left in the game.

“We’re just a good team,” Burrow said. “We’ve got Joe Mixon, we’ve got all those receivers, and we’ve got an o-line that’s playing really well. Teams are going to have to pick their poison with us. We’ve had some games where we haven’t quite executed the way we wanted, but we’ve also had some games like today where we’ve executed better.”

The Bengals know they can forget about Bart Scott and worry more about Tyreek Hill and Travis Kelce running free in the secondary. That, and taking care of the football, will mean more than mean words from a retired NFL player.

The Bengals last played Patrick Mahomes in 2018, when Mahomes embarrassed the Bengals 45-10 on Sunday night football in the final year of Marvin Lewis in Cincinnati. The Bengals are far more equipped to handle Mahomes this time, with linebacker Logan Wilson returning after missing the last three games with a shoulder injury.

Joe Burrow: Last week, Burrow achieved the most prolific passing day in the 54-year history of the franchise, completing 37-of-46 for 525 yards and four touchdowns. He hasn’t thrown an interception since the loss to the Chargers on Dec. 5. Burrow’s job in this game is to take care of the ball and not give the Chiefs short fields. If he can take time off the clock great, but not turning the ball over is everything against a Chiefs defense that is among the most opportunistic in football. First in yards per passing attempt (8.66). Besides that, Burrow’s numbers are remarkable this season, and border on MVP levels:

Chris Jones:
Since the arrival of defensive coordinator Steve Spagnuolo in 2019, the Chiefs defensive unit has sacked the opposing quarterback 103.0 times. Jones is responsible for 23.5 of those sacks. The defensive edge is one of the best in the business and we’ve said that a lot this year about Bengals opponents. The Bengals have had varying degrees of success, starting with the Bosa brothers on back-to-back weeks, the Vikings at the start of the season and Raiders and Broncos. The Browns teed off on Burrow when the Bengals fell behind. The offensive line is coming off one of its best efforts of the season, a big reason why Burrow was able to throw as much and as effectively as he did. This is yet another reason not to fall behind by multiple scores in this one.

Joe Mixon: If the line can run block, the Bengals should fare reasonably well. The Chiefs come in ranked 20th in run defense in the NFL at 116.5 yards per game. Mixon has figured prominently in big wins this season for the Bengals, even last week, when he ran it in on Cincinnati’s first touchdown of the day on fourth down. That is precisely the mentality the Bengals need against KC. They need to win the trenches, a key battleground for any team with aspirations of going deep into January and possibly February.

Higgins, Chase and Boyd: The Chiefs secondary is ranked 25th in the NFL, allowing 245.7 yards per game. The Bengals trio should have plenty of chances to attack this defense if their star quarterback is given time in the pocket and do his dirty dancing in the pocket like he did last week.

Patrick Mahomes: He has been the most dynamic quarterback in football for the past three seasons. And he’s doing it again in 2021. In 2018, he came within a Dee Ford offsides of beating Tom Brady and authoring one of the great comebacks in AFC Championship history against the best-ever to do it. He’s been to the Super Bowl in the two years since. As Lou Anarumo put it on Thursday, this game defensively for the Bengals will be all about putting pressure on No. 15. If they don’t, it’s going to be a long day for the scoreboard operator and the Bengals defense. “My experience with all these great quarterbacks, from Brady on down, you have to get around them,” Anarumo told me. “You have to hit them. And pressure is the ultimate equalizer. And that’s what we have to do. We have to harass the quarterback on Sunday.”

Tyreek Hill: The plan here is as simple as it is challenging. Do not let this “Olympic sprinter” get behind your defense. He’s going to make catches underneath. When he does, make him run horizontally till you get bodies to converge, then tackle well. Bill Belichick famously told his team GTFB when directing his secondary in the weeks leading up to a game against explosive receivers. With the also speedy Mecole Hardman and Bryon Pringle available, this would certainly qualify as one of those games for the Bengals secondary. “It is easier said than done,” Taylor told me Friday. “Last week against Pittsburgh, they’re in Tampa-2 and (Mahomes) scrambles. He attacks the line of scrimmage, safety comes up and they get a tight end that wheels down the sideline behind them. You can do all the work, call the coverage, guys are doing a great job for the first six or seven seconds of the play, and then as the play strings out, that’s where they really test you at that moment.”

Travis Kelce: The Bengals again must do what they can from allowing Kelce to get vertical on routes. Allow him to catch the ball if necessary but do not allow him to break tackles and YAC you to death. It’s not so much the yards after catch as it is yards after contact that Kelce makes teams pay. Again, keep him in front of the defense, make Mahomes put together long drives and play damage control as much as possible. Don’t forget about Clyde Edwards-Helaire.

Logan Wilson: The linebacker returns Sunday but who knows how effective after being carted off with a left shoulder injury covering a punt against the Chargers. Germaine Pratt landed on COVID reserve and could return if he clears protocols. D.J. Reader returns, and long with Larry Ogunjobi, this could stabilize the middle of the line and help the Bengals attack on the edges.

Evan McPherson did miss a 50-yarder last week against the Ravens in garbage time, but he is coming off a December in which he earned AFC Special Teams player of the month honors, converting nine of his 11 FGs and eight of his nine PATs. Two of his December FGs were from 50-plus, including a Bengals-record 58-yarder on Dec. 19 at Denver. McPherson now has nine FGs from 50 or more yards this season — the most in the NFL this year, the most in team history for a season and an entire career, and one shy of tying the NFL’s single-season record (10, by Blair Walsh in 2012, Justin Tucker in ’16 and Brandon McManus in ’20). McPherson scored 35 points in December — more than one-third of Cincinnati’s 101 total points for the month — and his 120 points on the year are fourth in the AFC and just 12 shy of the Bengals’ single-season record.

Kevin Huber didn’t get any work last week as Joe Burrow gave him in the week off. Huber comes into the game after a good day in Denver two weeks ago that raised his net average to 42.0 yards per punt, good for 11th in the NFL. He also had three of his seven punts land inside the 20.

Another casualty of COVID, Harrison Butker was placed on the COVID before the Steelers game. Elliott Fry hit 3-of-4 PATs and 3-of-4 field goals to give him 12 points in one game. Butker is one of the more consistent kickers in football and is tied for 13th in the NFL with 107 points. He is 22-of-25 on field goals, including 6-for-8 from 50 and beyond.

With younger brother Tommy on COVID, Johnny Townsend assumed punting duties last week against Pittsburgh. He punted just twice in the 36-10 win over the Steelers. If younger bro Tommy returns this week, he’s a weapon for the Chiefs. He has booted 19 of 32 punts inside the 20. His net yardage of 45.5 puts him first in the NFL.

This has all the makings of an Ohio River City shootout. Mahomes and his cast of experienced weapons against Burrow and his arsenal of young and gifted weapons on a reasonably mild Jan. 2 afternoon at Paul Brown Stadium. The Bengals are maturing before our eyes, much the way the great teams at the beginning of their run do. The Bengals have one or two more playmakers on defense and that could be the difference as this game could come down to which team blinks (or punts) first and has the ball last. Betting on the Bengals for the division in this spot.