How Bengals Rise To Occasion vs. Jaguars On ‘Ring of Honor’ Night 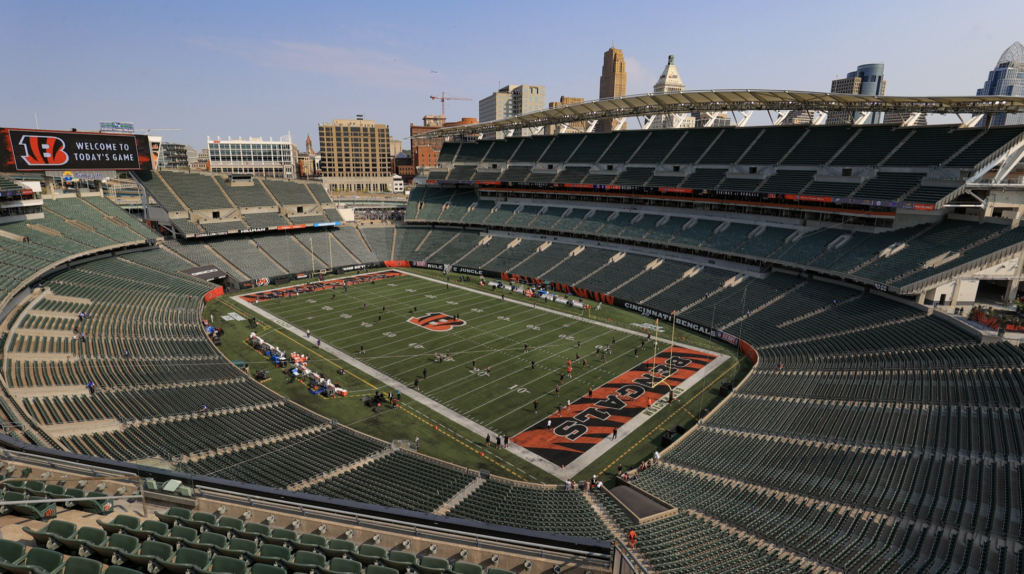 CINCINNATI – The Bengals have been pointing to this game and this night all offseason. It’s a night to celebrate and commemorate the franchise’s greatest players and its patriarch on national television.

It’s the unveiling of the four charter members of the Ring of Honor as Paul Brown, Hall of Famer Anthony Munoz, Ken Anderson and Ken Riley will all have their names revealed on the East Façade of PBS.

It’s a matchup of No. 1 overall quarterbacks.

It’s a game there for the taking for the 2-1 Bengals, who enter as touchdown favorites over the 0-3 Jacksonville Jaguars.

Now, the Bengals have to go about the business of taking nothing for granted and go out and prove they’re the better team against a squad that has lost 18 straight, dating to the 2020 season opener.

This feels as much of a must-win for the Bengals as any game in the Zac Taylor era. The team is coming off a confidence-boosting win in Pittsburgh, a game characterized by some players and coaches as a game that shows the Bengals believe in themselves. “The belief is there,” Taylor said after Sunday’s 24-10 win at Heinz. For that belief to remain and grow, this has to be a win.

No reason for these two to stop now. If the Bengals can contain edge rusher Josh Allen and give Burrow enough time, he should be able to find Chase downfield the way he has in the first three games. The chemistry has proven worthy of expecting at least two shots per game. The Jaguars are giving up 302 yards passing per game, good for the 28th-ranked pass defense in football, which is to say, not good.

After a rough game in Chicago, Mixon and the offensive line were back on their game in Pittsburgh. Mixon ran 18 times for 90 yards for a 5-yard per pop average. His best run came on a backside zone block as he waited just long enough for Trey Hopkins, Jackson Carman and Riley Reiff to clear out the right side and planted and made his way immediately up field for 27 yards.

It’s precisely the run that Frank Pollack wants to see. Identify the gap and go. Mixon’s substantial burst did the rest. This is something the Bengals should be able to repeat successfully over time. The Jaguars present a challenge, however, giving up just 3.44 yards per carry, seventh-best in the NFL.

“He might be the best linebacker in the league.” Those were the words of Joe Burrow on Tuesday about the linebacker in his sixth year out of UCLA. Burrow isn’t wrong. The Bengals must account for Jack and the “other” Josh Allen, the first-round OLB in 2019 out of Kentucky, on every play. If they do, look for big plays up top. The Jags are giving up 302 yards passing per game, nearly nine yards per attempt, third worst in the NFL.

When the Jaguars have the ball:

Expect Lou Anarumo to try and do what any NFL defensive coordinator would do: confuse the rookie quarterback. So far, it’s paid off for the opposing defensive coordinators as Lawrence is going through big-time growing pains. He’s completing 54 percent of his passes, the lowest of any qualifying QB in football.

Will be interesting to see if "Lurking" Logan and the #Bengals D can catch Trevor Lawrence like they have with Justin Fields (a rookie) and Ben Roethlisberger (an 18-year vet). Wilson has played the role to a T, with of course some help from QB. pic.twitter.com/Ey5DtCqJun

Lawrence is tied with Zach Wilson for the NFL lead in picks with seven. His QB rating is 60.3, only Wilson’s is worse at 51.6. This is a game where the linebackers and secondary should be able to disguise snap after snap.

Will this finally be the regular season debut of Trae Waynes in Stripes after signing in March 2020? Bengals fans certainly hope so. Waynes may or may not be able to play the entire game but if he isn’t – and with Chidobe Awuzie likely sidelined with a groin injury – you could see a Darius Phillips-Eli Apple combination that was on the field in the fourth quarter in Pittsburgh. The Bengals had a 24-7 lead at the time. Apple has shown respectable improvement from Game 1, and really all they need from his is to keep the plays in front of him and not get beat over the top. DJ Shark and Marvin Jones figure to test the Bengals secondary early. If Bates doesn’t go, then it’s Brandon Wilson time. The Bengals might get an idea in this game about the quality of depth in their secondary and whether they’re going to need to address it before the Nov. 2 trade deadline.

The Bengals defense was on the field for 87 snaps against the Steelers in the sun and heat Sunday. Will that have an impact? Will the Bengals be as crisp in tackling as they have been so far in three games against the Vikings, Bears and Steelers?

Another solid game for rookie Evan McPherson in Pittsburgh. A made 43-yarder and he’s converted on all four field goals and all eight PATs in 2021. Eleven of his 14 kickoffs have gone for touchbacks.

An underrated part of Sunday’s win in Pittsburgh was the work of Kevin Huber. Three of his five punts were inside the 20, including a long of 54 yards. He had a net average of 45.4 yards.

Josh Lambo was booed off his own field after missing a pair of PATs in Sunday’s loss to the Cardinals. He also has missed all three field goal attempts this year. As a result, the Jaguars signed Matthew Wright off their practice squad and he could start for the Jaguars instead of Lambo.

No one has punted more in the NFL this season than Logan Cooke, who has booted away 16 times in three games. More impressive, his 46.3 net average leads the NFL.

Tomorrow, we honor the inaugural class of the Bengals Ring of Honor. Get caught up on their legacies prior to the induction ceremony.

Visit our YouTube to watch the full feature: https://t.co/bVURygxVj7 pic.twitter.com/NDq7Vqv5n7

Even if Tee Higgins, Jesse Bates III and Chidobe Awuzie miss this game, there is absolutely, positively no excuse to let up or let down and blow this game at home on national TV to a team riding an 18-game losing streak. Yes, all the pressure is on the Bengals to respond. They simply have a better roster and, coming off a resounding win in Pittsburgh, the accompanying confidence. They need to get up quick on Jacksonville, not let them stick around and think they have a chance. They should and will.