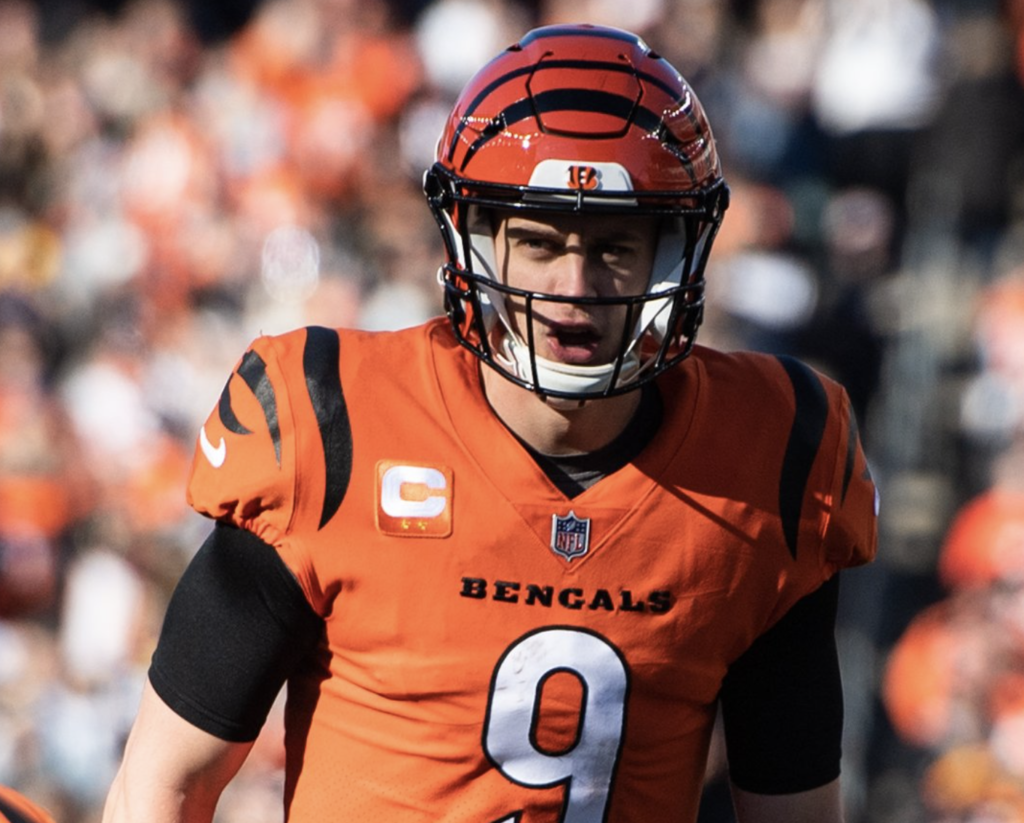 Joe Burrow has his eyes on Joey Bosa, Derwin James and the Chargers in a key AFC showdown this Sunday at Paul Brown Stadium.
Share
Facebook Twitter Email

CINCINNATI – The Bengals continue their hopeful drive to their first postseason berth since 2015 with an encounter against a franchise that’s been a thorn in their side for the last decade.

If the Bengals can manage a win over the Los Angeles Chargers Sunday at Paul Brown Stadium, they will take a huge step in their playoff aspirations.

The Chargers were the team that eliminated the heavily favored Bengals, 27-10, on a rainy January Sunday at Paul Brown Stadium in Jan. 2014. The Chargers held off the Bengals in a soccer stadium in Dec. 2018 in Marvin Lewis’ final season. And who can forget Randy Bullock’s right calf failing him at the most inopportune time on a potential game-tying field goal at the end of regulation in Joe Burrow’s first game as a pro in 2020?

Of course none of those disappointments compare with the joy of arguably the most important and delicious win in franchise history, the 27-7 win in the “Freezer Bowl” AFC Championship 40 years ago this season.

❄ Have to break out the Freezer Bowl highlights anytime the Chargers come to town.

It's been almost 40 years since we clinched a trip to the Super Bowl in the coldest game in NFL history. ❄

But that’s all in the past.

These Bengals have shown they’re about the here and now in 2021 and last week’s demolition of the Steelers should hammer that point down with authority.

The Bengals are 7-4, and if they pull out the win, they will be two games ahead of the Chargers with a head-to-head win. They already hold that advantage with the Raiders.

“We’re right where we want to be,” Burrow said, eyeing a stretch of four home games in the final six weeks. “We have high aspirations this year, so we can’t let up now.

“We started the season out strong, but then we kind of skidded a little bit there in the middle. Now, coming down the stretch, we’re really hitting our stride. We have guys that are excited about where we’re at, but not satisfied.”

Joe Burrow: Burrow leads the AFC in passer rating at 101.6. Last week, he completed a career-high 83.3 percent of his passes, including six to Tee Higgins, who had 114 receiving yards and a TD. Higgins caught six passes of at least 15 yards on the day, the first time that has been done by a Bengal since 2010 (Terrell Owens, seven).

Offensive line: Can it hold up? Riley Reiff’s left ankle got tweaked in the first half of Sunday’s win over Pittsburgh. If he can’t go, Isaiah Prince gets the call at right tackle, as he filled the role against the Steelers. Center Trey Hopkins is dealing with ankle and knee issues but has been able to grind through. Trey Hill was able to get in 15 snaps filling in for Hopkins, who was rested as the game got out of hand. This is particularly critical considering the combo of Joey Bosa and Uchenna Nwosu on the edge and Linval Joseph expected off COVID-IR.

Bosa and James: They are two of the best defensive playmakers and offensive game-wreckers in the sport. Burrow and the Bengals have to account for them on every single down. Strong safety Derwin James Jr., a one-time object of Bengal draft desires in 2018, leads all defensive backs with 93 tackles while Joey Bosa has an NFL-best four strip-sacks this season. He has 7.5 sacks this season.

Joe Mixon: Can Mixon repeat what he did against Pittsburgh? More to the point, can the offensive line provide the holes through its zone blocking schemes from the get-go the way they did at the end of the Raiders game and against Pittsburgh? It’s the million-dollar question and clearly the best way to counter the pass rush of the Chargers. Mixon, one of the NFL’s hottest players in recent weeks, rushed for a career-high 165 yards and two TDs. Mixon has scored a TD in each of his last eight games, the second-longest active streak in the NFL and tied for the third-longest in Bengals history. He also has scored multiple TDs in each of the last four games, the longest such active streak in the NFL and the longest in Bengals history.

Justin Herbert: In his 26 career starts, the Chargers quarterback has been the one of the best passers in the NFL at moving the chains on third down. He has completed 165 passes on 265 attempts (62.3 pct.) for 2,061 yards and 22 touchdowns with nine interceptions (99.9 passer rating). Herbert’s 100.6 passer rating this season ranks No. 3 among AFC quarterbacks with at least 50 third-down attempts.

Austin Ekeler: The running back continues to score through the air and on the ground, solidifying himself as one of football’s best receiving backs. His 14 scrimmage touchdowns this season rank No. 2 in the NFL and are the most in a season by a Charger since Hall of Famer LaDainian Tomlinson (18 in 2007). Ekeler ran for 84 yards on 19 carries in the 2020 opener against the Bengals.

Trey Hendrickson: Hendrickson had a strip-sack of Roethlisberger, which Sam Hubbard recovered. Hendrickson has a sack in each of Cincinnati’s last seven games, the longest active streak in the NFL and the longest in Bengals history. “We have guys rushing with Sam, Larry (Ogunjobi), and D.J. (Reader). The linebackers are fitting holes in the run game. The coverage is amazing. Even the coaches — they’re a part of the chemistry, and they care a lot about these players. You can feel that. What we have is special, and that’s what we’ve been planning on doing since I walked in the door.”

Mike Hilton vs. Keenan Allen: Hilton was more than up to the task last week, covering slot receiver Diontae Johnson. Hilton’s day included his first-ever pick-6 at any level of football. This week, it doesn’t get easier as Keenan Allen comes calling in the slot. Last season, the Bengals didn’t have Hilton to check Allen, who caught four passes from Tyrod Taylor in the 2020 opener.

Evan McPherson had two more field goals in two attempts Sunday against the Steelers, including another 50-yarder. He is first in FGs of 50 or more yards (seven), sixth in touchbacks on kickoffs (42) and tied for eighth in points among kickers (85).

On Dec. 1, 2013, in a win at San Diego, Kevin Huber set the Bengals record for net yards per punt in a game (55.5). Huber in that game also tied Johnson for most punts (11), and also tied the team mark for the longest punt (75; set by Kyle Larson in 2005 at Jacksonville). Huber has played in 201 career Bengals games, five shy of LB Reggie Williams (206) for second place all-time. CB Ken Riley (207) is the Bengals’ all-time leader. Huber passed QB Ken Anderson (192) for third place all-time in Game 3 at Pittsburgh.

Dustin Hopkins assumed kicking duties from Tristan Vizcaino in Week 7. Hopkins has been 7-of-8 on field goals and 12 of 13 on extra points. Vizcaino was only 10-for-15 on PATs.

Ty Long is only averaging 37.3 yards in net average, 27th in the NFL. He only has placed nine of 32 punts inside the 20. But he does do a good job of avoiding the end zone, with just one touchback this season.

The Bengals have the chance to seize control of their destiny with just five weeks remaining after Sunday. Joe Burrow seems to have finally found his comfort zone with Joe Mixon taking a lot of burden off his shoulders. Burrow has already demonstrated he can sling with the best of them. Can the defense rise to the occasion once more and handle Herbert and his weapons? They’ve really had only 4.5 bad quarters this season, against the Jets and the full game against the Browns. The secondary is back to where they were before the Jets game and that should help against Herbert. B.J. Hill and Ricardo Allen are two players no one is talking about on defense. Eli Apple is improving with each week. All of the above should be enough.