W2L4: How The Bengals Can Open 2-0 With Win Over Bears 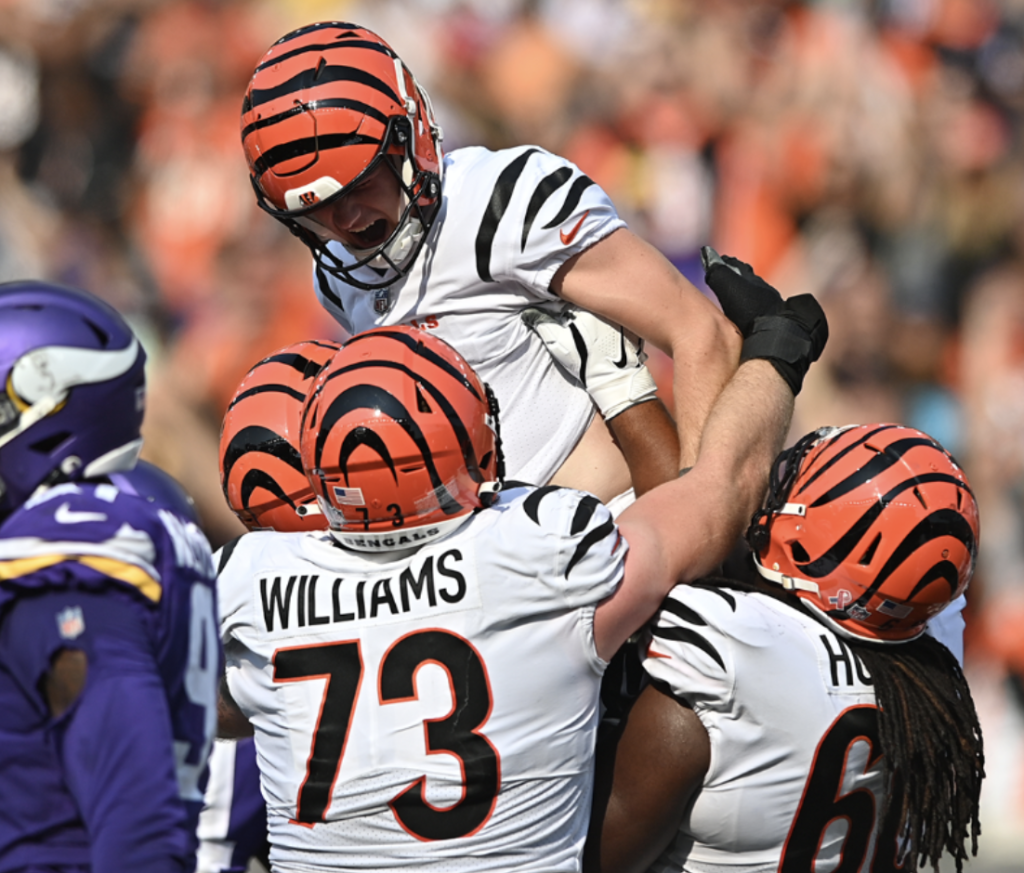 The Bengals showed last Sunday that their defense could quite possibly live up to the potential it demonstrated early in camp when it frustrated Joe Burrow and hounded a very talented trio of young receivers.

That potential continued in the preseason opener when they sacked Tom Brady on his first and only series of the game and showed improved tackling prowess. They looked solid again in Washington in Week 2 and the starters didn’t play at all in Week 3 against Miami.

The Bengals defense figures to have the distinct advantage this weekend IF they can contain David Montgomery the way they kept Dalvin Cook in check. They know Andy Dalton’s game. Seven defensive starters were not on this roster when Dalton enjoyed a 30-7 win with Dallas late last season at Paul Brown Stadium.

As the Bengals attempt to go 2-0 Sunday in Chicago, here are some things to look for from the men in stripes:

Tackles Jonah Williams and Riley Reiff were very good against Minnesota last week. They and the rest of the line cannot afford any kind of letup against a Bears defensive front that is one of the lone bright spots on this roster. Identify Akiem Hicks and Khalil Mack at all times. Hicks is a tackle who could easily move to the edge in ‘5’ or ‘7’ technique. With nose Eddie Goldman likely out of this game with a knee issue, the Bears are going to lean heavily on these two. Linebacker Roquan Smith is a former first-rounder in 2018 and is another piece of the Bears defense to prioritize in protection and blocking. Let Joe Mixon get his game going, drawing safeties in the box and set up play action. Mixon led the NFL in Week 1 rushing with 127 yards on 29 carries and a TD. If the Bears are aggressive, could be a big game for Tyler Boyd off the line of scrimmage.

The Bears secondary is not a strength. Burrow, given time, could slice and dice this unit for big plays and could hit it big up top to Chase and Higgins again. Watch for accuracy on Burrow’s throws early. His shoulder and ankle were dinged in the opener. If he comes out strong and accurate, that should allay any worries over his health. And as for his knee which was admittedly “pretty sore” after Sunday’s game and was listed on the injury report, that shouldn’t be a big issue. Quinton Spain is expected to start at left guard after missing Friday’s practice for the birth of his child. The middle of the Bengals line was for the most part ok against Minnesota but missed some assignments Sunday and Burrow took some hits.

🗣 "We gotta give them a show." @teehiggins5 was mic'd up for our win and he brought the energy.

Simple. Contain David Montgomery, who was second to Mixon in Week 1 with 108 yards on just 16 carries, a 6.8 ypc average. Repeat and rinse from last week on Dalvin Cook. Allen Robinson is Andy Dalton’s No. 1 target. He was targeted 11 times but only caught six passes for 35 yards. Marquise Goodwin is a sneaky good option for Dalton in the slot. He caught four passes on all four targets for 45 yards. Tight end Cole Kmet caught five passes for 42 yards and is Dalton’s new Tyler Eifert in the Bears offense.

Of course, the biggest X-factor in all of this is whether Matt Nagy and his offensive mind decide to mix in a lot of the more athletic rookie Justin Fields just to give the Bengals a different look and play more of a spread game. Dalton, for the record, said this week he’s not looking over his shoulder but if the Bears defense stalls, you can be sure to hear calls from the crowd for Fields. Bengals D coordinator Lou Anarumo is no doubt prepared for this possibility. Anarumo must also decide how best to compensate for the loss of safety Ricardo Allen, who injured his hand last week after playing a big role in nickel and dime packages. The Bengals are likely to go with a traditional nickel look and the speedy Darius Phillips might play a big role, especially if Fields enters the game.

Rookie Evan McPherson became the youngest kicker in NFL history to boot an overtime game-winning field goal when his 33-yarder split the uprights as time expired Sunday. He was subsequently honored as the AFC Special Teams Player of the Week. He’s been as advertised. With a close management of his heart rate, McPherson has been cool under pressure so far. He responded to the competition in camp and preseason with Austin Siebert flawlessly. In addition to the game-winner, he booted a 53-yarder Sunday to put the Bengals up, 24-14.

Kevin Huber does not want to be as busy as he was against Minnesota, when he punted seven times for an average of 47.4 yards, with a very solid net average of 42.9. He was again a reliable presence on special teams and flipped the field several times when needed. He had three inside the 20 and just one touchback. Damiere Byrd and Nsimba Webster handle punt return duties for Chicago.

Cairo Santos is a 29-year veteran in his second season with the Bears. He converted both PATs against the Rams but didn’t attempt a field goal in the opener. He had three touchbacks on three kickoffs.

Pat O’Donnell had one punt against the Rams, and it was an effective 36-yarder inside the 20. Darius Phillips had a very busy day against the Vikings, and it was a fairly productive one. He returned five punts for an average of 10.6 yards, including a return of 15 yards. He could be a big factor in giving Burrow and the Bengals better field position, but Job Numero Uno is ball security on the road. Do not allow a turnover to energize the Soldier Field crowd.

This is a game the Bengals need simply to prove they are as good as they believe they are. They need to show they can win on the road and in a very hostile environment. They will.
Bengals 31, Bears 20