W2LF as Bengals Gear Up For Preseason Game No. 2 In Washington 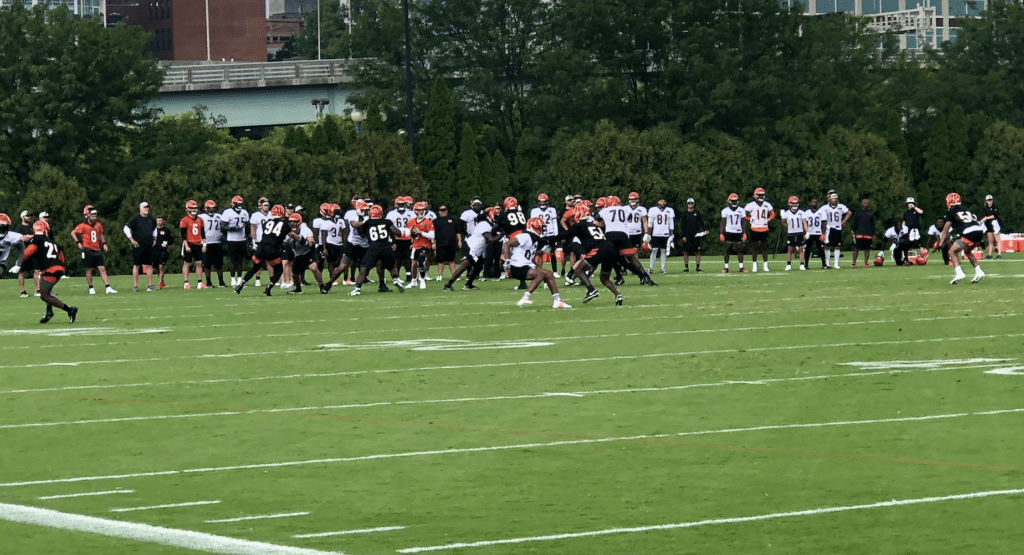 The Bengals play their second preseason game and many of the same questions remain, even after a 19-14 win in Tampa last Saturday.

We know Joe Burrow won’t play again against the team that ended his rookie season last Nov. 22 on the very same field where the Bengals take the field Friday night. He will, however, be watching closely from the sidelines as he, the coaching staff and everyone with a vested interest in the team watches how the offensive line plays in front of Brandon Allen.

In the bigger picture, the Bengals must trim their roster to 80 from 85 by Tuesday.

QUARTERBACK
With Joe Burrow sitting out again, how will Zac Taylor split the reps between Brandon Allen, the presumed back-up, Kyle Shurmur and Eric Dungey? Dungey didn’t get any reps against Tampa Bay last week.

THE CHASE IS ON
The subject of drops has become a more recurring one at Bengals camp for first-round pick Ja’Marr Chase. He had one on the sideline on Tuesday and a couple more on Wednesday. If Chase gets a chance in two or three offensive series, and Allen gets the chance to feed him the ball, this is definitely something that bears watching. Sometimes, receivers can drop a ball when they’re wide open as opposed to making a contested catch where the focus on the hands is more intense.

“I never say anything,” Burrow said. “Whenever a receiver drops a ball, they know they dropped it. You don’t have to remind them. Let them know you are coming right back to them. That’s the way this works.”

Burrow said Chase has already shown that he’s willing to demand the ball when possible.

“Yeah, of course he does. That’s a good thing,” Burrow added. “You want to come off a sideline in a game and hear, ‘Hey, this corner was inside leverage on me throw it over the top. We can come back to that, something like that. That dialogue is great, it’s critical.” 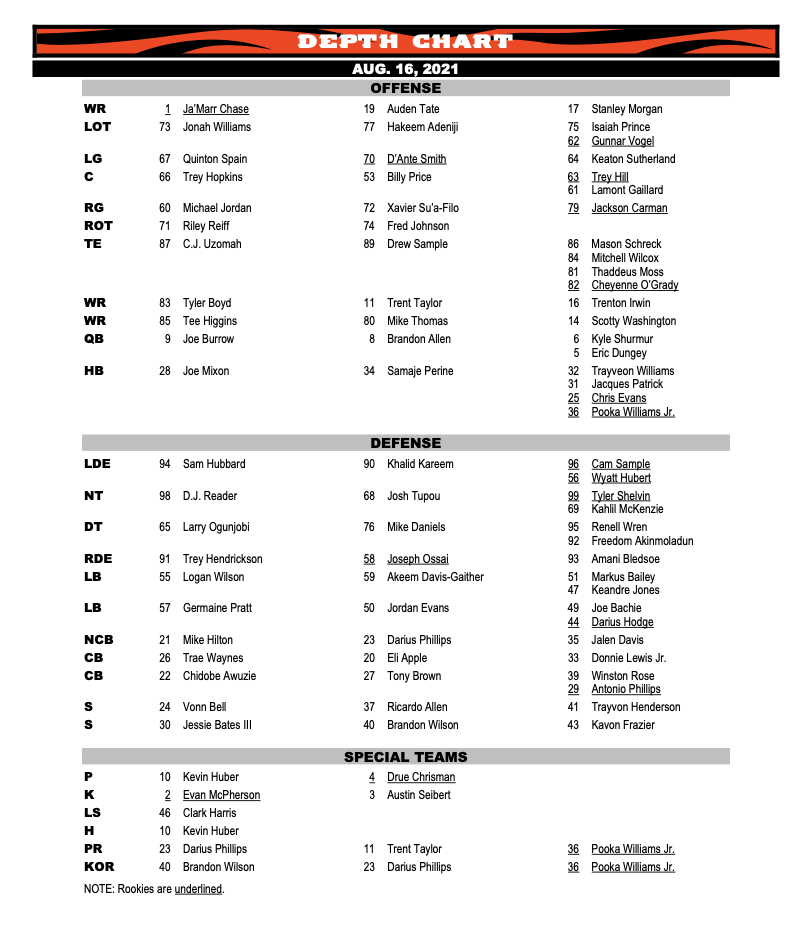 LESSONS LEARNED
Joe Mixon had one carry for three yards behind the starting offensive line. Could we see more of Mixon in the passing game? He wasn’t in the game last week to get targeted. Perhaps that changes this week.

“Really exciting to see for him and he’s taken that a little more seriously,” Joe Burrow said of Mixon’s pass-catching skills. “That could be a big part of his game. He’s going to get the ball in space one-on-one with the defender, that’s what you ask for in the run game, just do it in the pass game too. He ran a really good route (Wednesday), too, I was really excited about.”

Samaje Perine carried it only three times for five yards. Jacques Patrick looked the most impressive north and south, gaining 71 yards on 15 carries. The coaching staff has likely seen enough of him and will use Friday’s game to see more of Chris Evans who showed flashes of speed but too much flash for the liking of the coaching staff, who emphasized to him to pick a hole at the line and then make your elusive moves at the second level.

“It felt good. I was able to experience the NFL game, speed, contact, special teams,” Evans told me. “I was happy with my performance, but I have little things I’ve got to clean up. On some of my runs, I’m trying to give holes a chance but at this level, once you give too long of a chance, (that hole) is gone. That’s something I found out real quick.”

Sometimes, as Brian Callahan said this week, a zero gain is a positive play. Trayveon Williams will sit out again, meaning Pooka Williams could get looks both as a back and a wide receiver. Friday figures to be big nights of evaluation for Evans (lessons learned), Patrick (continued progress) and Pooka Williams Jr. (first game look).

OFFENSIVE LINE
As has been the case all camp, the offensive line, namely the interior, will have the most focus against a Washington team that figures to be one of the most dynamic pass rushing groups in football. With D’Ante Smith (dehydration) and Trey Hopkins (precautionary knee rehab) out, this is another chance for Michael Jordan and Xavier Su’a-Filo to prove themselves at right guard. Barring injury, Quinton Spain is almost assuredly the left guard to start the season. Friday is another big night for Billy Price to prove he can handle the load behind Hopkins at center once the season starts. Riley Reiff and Jonah Williams graded out well against Tampa Bay. Williams will have a big chance to show off his growth and confidence as he and Reiff oppose Chase Young and Montez Sweat. This venue was, of course, the Waterloo of the 2020 Bengals offensive line unit. Nice place to rehab the image somewhat and make a positive statement. Right tackle Fred Johnson should get his shot in this game after sitting out the preseason opener at Tampa.

OTHER PLAYERS TO WATCH
With Joseph Ossai sidelined with a right wrist injury, this should be the night that Larry Ogunjobi makes his Bengals preseason debut, giving fans a nice look at what the combination of Ogunjobi and D.J. Reader look like lined up next to one another on the defensive line. Trey Hendrickson and Sam Hubbard looked impressive in their very brief stint last Saturday at Tampa. Getting pressure up front will be critical to meeting the goal of creating more turnovers in 2021. While Ossai made several impressive plays against the Bucs, another rookie – Cam Sample – had a very active night as well, showing his ability to shed blockers and get to the quarterback twice. Markus Bailey and Trayvon Henderson each had four tackles last week and will be looking to continue posting numbers on every snap chance they get.