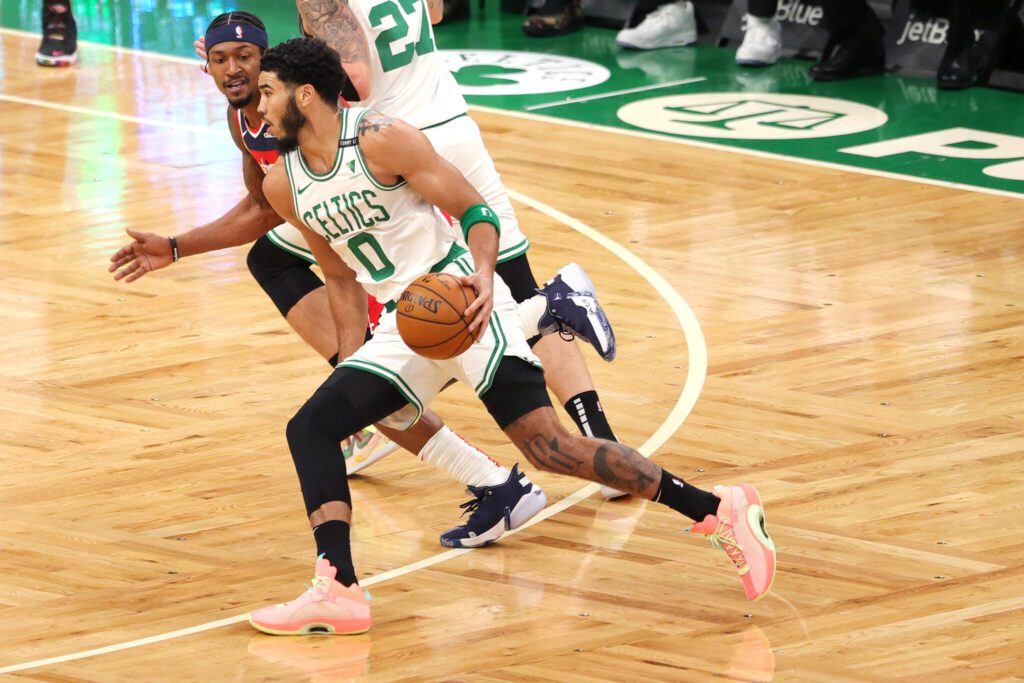 BOSTON, MASSACHUSETTS - JANUARY 08: Bradley Beal #3 of the Washington Wizards defends Jayson Tatum #0 of the Boston Celtics in the first quarter at TD Garden on January 08, 2021 in Boston, Massachusetts. NOTE TO USER: User expressly acknowledges and agrees that, by downloading and or using this photograph, User is consenting to the terms and conditions of the Getty Images License Agreement. (Photo by Maddie Meyer/Getty Images)
Share
Facebook Twitter Email

Jayson Tatum’s father never knew him to be the flashiest personality in the room or the outspoken type. The comedy emerged subtly to those who knew him. “He jokes a lot,” Justin Tatum said before his son’s draft in 2017.

Jayson may not have clowned another opposing player, but when he landed next to his lifelong friend Bradley Beal after unloading a right-handed slam in Robin Lopez’ face on Sunday, he gave Beal a light slap on the rear end. That moment escalated into a heated closing stretch two quarters later.

Love Tatum’s tap of Beal after here. Like did you see that? pic.twitter.com/c8Hc0zEIOy

Beal reached 46 points and gave Washington a 110-105 lead with three consecutive shots. His teammates lined up along mid court as Beal rushed toward them with his arms extended like a plane toward a row of high fives into the huddle.

Tatum struck back with a 6-0 run in 40 seconds, executing two perfect traps on Beal and capping a classic one-on-one battle between two of the league’s brightest young talents with a game-winning layup as he stumbled into his own teammates’ embrace.

Their longtime trainer Drew Hanlen watched in St. Louis with his mom. Pure Sweat, Hanlen’s basketball training collective, is celebrating four starters in the NBA All Star Game between Joel Embiid, Zach LaVine and his two fellow St. Louis natives. Beal and Tatum are two of the most expressive basketball artists with an array of crafty moves, finishes and deadly jumpers. They’re thrilled to guard each other when the Celtics and Wizards meet, and next week may get the chance to play on the same team for the first time. Tatum, Hanlen says, will likely choose the three-point contest over the skills competition.

“It’s hard for me when you’re watching both guys,” Hanlen told CLNS Media. “It makes it even harder when they’re guarding each other. I basically just end up cheering for whoever is on offense.”

Sunday marked the third meeting this season between Beal and Tatum as they’ve emerged into two of the league’s best scorers. Beal is averaging 33.2 points per game to lead the league and carried Washington into Boston winners of 7-of-8. Tatum, locked down two weeks prior by Beal in a 104-91 loss and looking horrible to Hanlen since his return from a COVID-19 diagnosis, had his best game since to secure back-to-back wins for Boston for the first time since January.

Beal only defended LaVine for more minutes than Tatum this season. He laid down a block on Tatum in the first game January and another in Washington, has held him to 7-of-18 shooting and 62 points for Boston in 64 possessions (0.96 PPP) knowing all of Tatum’s moves from summers in Missouri.

Childhood friends Jayson Tatum and Bradley Beal battling back and forth. A special sight.

“Jayson is basically trained using Brad’s exact improvement model for his entire career,” Hanlen said. “Brad was like my guinea pig. When I say that, we basically tried stuff out and then tweaked stuff to make it more efficient and then once we had kind of an efficient way to master a new skill, then I was able to use that methodology with other players like Jayson and Zach (LaVine) and so on. With Jayson, we’ve added a lot of Brad Beal’s bag to his game and so we know each other’s tendencies.”

Listed five inches shorter than Tatum, Beal is a sharpshooter that bounces on and off the ball, cuts and moves constantly to find his points while packing tons of muscle to power inside. He dove into traffic on one play following his own three-point miss to secure a put-back make.

Bradley Beal getting wherever he wants on the way to 30 points midway through the 3rd. pic.twitter.com/RvAyKYe2Mt

Tatum, Hanlen says, is an isolation player that depends on size and length advantages. They both feature similar side-step and step-back jumpers, utilize screens constantly and spin into artful fade aways. They aren’t afraid of the mid-range, Tatum charging toward Beal in the post then spinning off him into a fadeaway.

Hanlen texts with all his Pure Sweat players like Kelly Oubre and RJ Barrett constantly — he even works out rap star 2 Chainz who he sat court side with last week to watch Tatum in Atlanta — but shares a group thread with Beal and Tatum alone. They text daily, Tatum says, and when he got originally announced as an All Star reserve Hanlen challenged one of them to become a captain next season to pick the entirety of the Pure Sweat roster.

Tatum’s candidacy wasn’t a given with Damontas Sabonis, Khris Middleton and Ben Simmons strong contenders at forward in the east. Tatum missed five games in January with COVID-19 and dipped to 41.8% from the field and 33% from three in 17 games after his return. Hanlen watched him shoot 4-for-20 and missed seven threes in Atlanta.

“(Tatum) was like listen, there’s two sides to it,” Hanlen recalled. “It is a lot harder to breath and get that second wind. The second part is mental side of it, they’re constantly telling you ‘let us know if anything is wrong.’ So every time that you feel your lungs or you feel a headache or whatever, you start overthinking and start multiplying the symptoms, so I think that’s what he was really dealing with is the combination of the physical and the mental side of the virus.”

Hanlen watched Tatum power to the rim for the win Sunday, marking his best game in 11 days just two days after he missed an open dunk against Indiana. Finishing remains Hanlen’s top priority for Tatum and he saw improvement in the win. Tatum also wants to advance as a playmaker and increase his shooting range.

The Pure Sweat offseason was squeezed into a few weeks, Boston only having 86 days total between the east finals and opening night, focusing on Beal and Tatum’s shooting and driving.Hanlen needs to clear quarantine during the season to work them out while wearing a mask and distancing.

Tatum pulled out all the moves late, working through Daniel Theis and getting free of Beal downhill toward the basket. His tough reverse layup got Boston within 110-109 with 15 seconds left, then Beal caught the in-bounds into a Javonte Green and Tatum trap and slid out of bounds.

After a brief replay review, a free timeout for the Cs, Tatum got the ball in, Payton Pritchard tossed it back to him and he turned the corner into an off-balance scoop layup past Beal for the win.

“Everybody knows our relationship. Everybody knows we compete,” Beal said. “We pull for each other. He’s an all star for a reason. He’s a special talent. I’m pissed off he had to get going against us tonight, he was struggling a few times coming into the game tonight, but he always picks up his energy when he plays me, so in that regard I was happy for him.”

After Tatum summersaulted backward following his finish, he jumped back into the huddle stern-faced and set himself defensively, recognizing a screen pattern Washington attempted on him and Theis. They both avoided the action, Tatum chased Beal on his curl to the right corner and Semi Ojeleye darted from Russell Westbrook to help.

“I was like alright, now we get to see what Brad has on the other end,” Hanlen said to himself. “Ojeleye, who’s another guy I work with trapped Brad so it was like all three of my guys in that corner. I was hoping that Brad would get a chance to go back at Jayson and maybe go mano-a-mano one more time.”

Beal’s heave from the double missed and that chance won’t happen until the all star game, or playoffs, though Tatum would prefer they team up. He mentioned that the pair have never played organized basketball together. They followed the same path to AAU, high school then chose different colleges and got drafted to Washington and Boston No.3 overall four years apart where they’re both looking to build championships.

They talk about it with Hanlen. Their styles, as active and expressive as any in basketball today, pull from greats like Kobe Bryant and Dwyane Wade who made the game an international sensation with their broad strokes of emblematic moves. Tatum’s father remembers him pulling them from TV as a teenager. The mid-range shot, as they debate with Hanlen in their chats, powered past champs through the playoffs, including ones associated with the three-pointer as much as the Warriors are. Kawhi Leonard did it. Tim Duncan. They hope to next.

“Jayson and Brad have made big strides in eliminating long twos,” Hanlen observed as his lasting impression of the game. “You see Jayson shooting a lot more threes than he ever has before, but the big thing for us is just take what the defense gives you and if the defenses run you off the three-point line, don’t be afraid to get a good on-balance mid range that’s going to help get your team a basket.”