‘Well that part sucks’: Bruins lose chance at No. 1, No. 2 seed in loss to Lightning 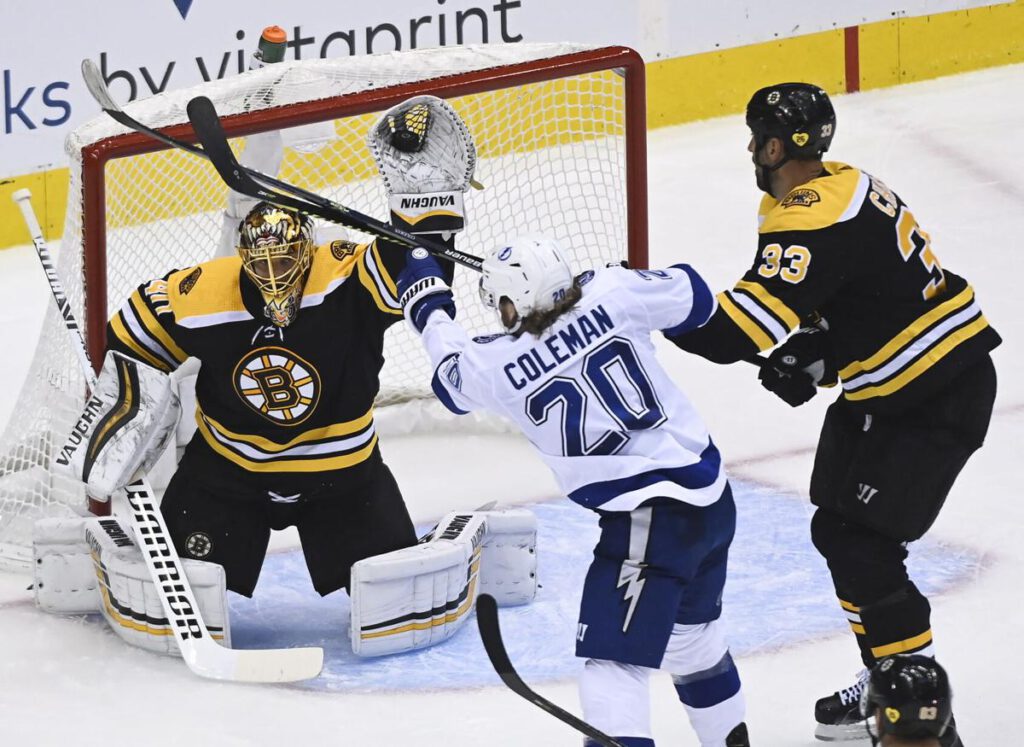 The Bruins finished the regular season as the only team in the NHL to hit 100 points at the time of the pause, earning them the Presidents’ Trophy. They owned the league’s best winning percentage (.714) and the league’s most wins (44). In almost any other year, they would’ve entered the postseason as the No. 1 seed from the East.

This is not one of those years.

Boston lost its chance at the No. 1 and No. 2 seed with a 3-2 loss to the Lightning on Wednesday evening. Among the top four teams in the East, the Bruins sit in fourth with zero points after the loss to Tampa Bay and Sunday’s loss to Philadelphia. The best they can hope for now is the No. 3 seed.

“Well that part sucks, I’m not going to lie to you,” Bruce Cassidy said about losing any chance at the top two seeds. “But that’s the situation this year with the stoppage of play. We knew the rules going into it that we would lose a bit of the advantage we gained so we are where we are. Now, we’re just trying to win a hockey game, get our game together for 60 minutes so that we can be at our best.”

It’s no secret the Bruins don’t look like the same team that skated off the ice in mid-March. Through two round robin games, the Bruins have struggled to get good, high-danger chances in the offensive zone. The Patrice Bergeron line has struggled to produce, although the trio looked much better in the second half of Wednesday’s loss.

The Bruins are normally airtight in their own zone. Since landing in Toronto, that hasn’t been the case. There have been multiple issues in defensive coverage and far too many giveaways. In net, Jaroslav Halak and Tuukka Rask have had their moments, just not enough of them to cover for the mistakes the Bruins have been committing in the neutral and defensive zones. Rask had huge, essential saves down the stretch Wednesday but yielded a rebound that led to Tyler Johnson’s game-winner.

It’s understandable that this is all happening in the first three games after a four-month break. Still, this dismal play has cost them the earnings of 70 regular season games worth of work.

“This is one year I do believe that seeding is less relevant than others,” Cassidy said after the loss to Tampa Bay. “I think everyone’s discussed that. Would I have rather been the No. 1 seed? Absolutely. Keep it. That’s not going to happen so get ready for Washington and play the best game we can so, like I said, prepare for the postseason.”

Cassidy is right — seeding doesn’t matter as much this season. Normally, earning the No. 1 seed would carry the most important benefit of having more home ice games than the opponent. Having trouble on the road? Don’t worry — Game 7 will be in front of your own, friendly crowd. That’s not a perk this year due to there being approximately zero people in the crowd.

The one assured incentive of achieving a higher seed is drawing lower seeds as opponents. At the time of this writing, the No. 6 seed Hurricanes have already steamrolled past the Rangers. If the No. 5 seed Penguins beat the Canadiens like they’re supposed to, the Bruins will play one of those teams in the first round.

Both would be extremely difficult draws.

“If you want to make a run in the playoffs, you have to beat every team anyways,” Rask said after the loss. “The situation is what it is. I think the worst case that’s going to happen is we’re going to lose the locker room in our practice rink so that’s about it. I really don’t care where we finish.”

Rask left out the advantage of last change, which is understandable for the goalie to omit considering he spends nearly all 60 minutes of the game nowhere near the bench.

Nevertheless, the Bruins will not be the No. 1 seed heading into the first round like they normally would’ve been had the season gone on as normal. That part is certainly true. But when a global pandemic like COVID-19 hits, all rules go out the window. The NHL found a way to come back and have a different, yet legitimate, quest for the Stanley Cup.

Even though it may seem unfair that two games will overrule 70, that’s life. The circumstances are the circumstances. And through those two games, the Bruins haven’t played well enough to earn the No. 1 or No. 2 seed.

Over the past few weeks, the Bruins have stressed using the round robin to find their game and get their lineup right. The cost, as stated above, was a high seed. The reward could be feeling confident and healthy heading into the start of the first round.

In that sense, Sunday’s loss to the Lightning wasn’t that bad.

“I thought it was a good effort,” Patrice Bergeron said after the loss. “Obviously not the start you want, but after that I thought we took it to them and had some pretty good looks, some chances and tied the game up. Obviously, you want to give yourself a better chance and go into overtime and find a way. It’s obviously not the result that you want but definitely felt more like it tonight.”

The team saw an improvement in 5-on-5 high-danger chances, going from three against the Flyers to six against the Lightning. The Bergeron line saw an improvement on Wednesday, which usually sends a ripple effect down the rest of the lineup. Here’s the difference from the first round robin game to the second, according to Natural Stat Trick.

Bergeron’s clean faceoff win led to Charlie McAvoy’s goal in the second period, which provided a huge boost of confidence for the group. On Chris Wagner’s game-tying goal in the third period, Sean Kuraly intercepted a puck deep in the Lightning’s zone to start the entire a sequence.

Another huge boost of confidence for the Bruins: Torey Krug fighting Blake Coleman after his hit on Brandon Carlo and Matt Grzelcyk jumping Barclay Goodrow after his blindside hit on Anders Bjork.

“That’s just sticking up for one another,” Cassidy said. “A lot of times that does get a team going and certainly with our team, a group that likes to play for one another, it certainly had an effect on the game, and I thought we did get going after that.”

Had Rask not let up that huge rebound on the game-winner, it’s safe to say he’d have probably been the No. 1 star of the game given how many huge saves he made in crunch time.

His post-to-post stop on Brayden Point was impressive and his follow-up pad stop on Ondrej Palat was extremely encouraging for Boston given it was his first complete game since mid-March.

Another great stop by Rask — this time on Palat. pic.twitter.com/bqiHY1FvSV

“I mean I felt good,” Rask said after the loss. “I felt normal out there. I got to improve my hip flexors out there, they were cramping up at the start of the second period, so I guess that’s probably what it is. I was seeing the puck well, I was moving well, I had legs, I was tracking the puck, so I’ve got to be happy with that.  That was my first real game in a couple months so I’m pretty happy how I felt.”

Aside from the game-winner and Tampa Bay’s first goal where Rask made a big stop and then lost track of the puck, Rask seemed to control rebounds well and find the puck in traffic with ease. At one point, he even angled his head to knock a shot from the point into the corner.

All in all, it was a solid performance out of Rask. Even after the cough quarantine and the four months off, it seems as though the Bruins will be getting the best out of their No. 1 goalie throughout the playoffs.

Another day, another time in which the Bruins keep the revolving door going on both sides of David Krejci.

Wednesday was Nick Ritchie’s first game back and Cassidy was interested in putting the power forward alongside Krejci. To do that, he moved Jake DeBrusk back with Charlie Coyle on the third line. At right wing, the head coach scratched Jack Studnicka, who was working fine as a part of that trio, and moved Kuhlman up.

Aside from a few heavy hits from Ritchie, the new line didn’t really work. Here’s how they did, according to Natural Stat Trick.

They were ineffective, as they struggled to generate good offensive zone time. In their own end, both the stats and the eye test indicated a tough game. Anthony Cirelli and Brayden Point both led successful efforts to shut this line down.

Where Cassidy goes from here with this line is unknown. He’s expecting Ondrej Kase back on Sunday against the Capitals, which means he’d move in for Kuhlman.

The head coach has some big decisions to make in the coming days. But this is what the Bruins wanted the round robin to be — a time to find their game and solidify their lineup. They’re doing that.

It just came at the expense of the No. 1 seed.