These Bengals have a legit Super Bowl vibe about them after 19-16 thriller over Titans. 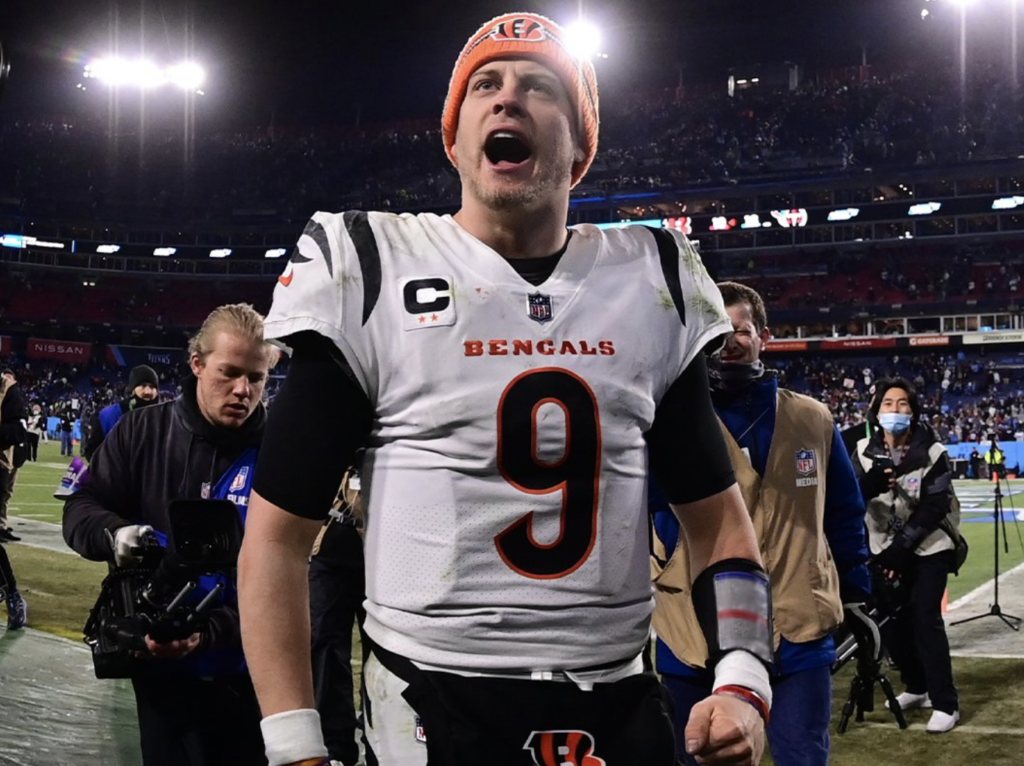 NASHVILLE – What we witnessed Saturday night here in Nashville was much more than the first road playoff win in Bengals franchise history. It was the birth of an attitude they believe will lead them on the road to Super Bowl LVI.

Evan McPherson’s cannon from 52 yards not only split the uprights and shook the back net, the 19-16 win over the top-seeded Tennessee Titans shook the NFL old guard and sent the Bengals to their first AFC Championship since 1988.

All the experts on all the networks, ESPN, NFL Network, everyone expected the Chiefs, Bills and Titans in the final four of the AFC back in July.

You had a second-year talented quarterback coming off an ACL tear, a rookie wide receiver taken over a supposed franchise tackle and a head coach with six wins in 32 NFL games.

The Bengals tried to convince the league through their 10-win, AFC North championship campaign that they were legitimate. Nice run, but they’re a year away the experts thought.

Then Saturday happened. The Titans were as advertised, harassing and terrorizing the Bengals offensive line all afternoon and into the night. The Titans came from 16-6 down to tie the game, 16-16 entering the fourth quarter. Great run Bengals. We’ll see you next year.

Except these Bengals had only to make believers of themselves.

Enter Joe Burrow and the captains Friday night before Saturday’s Divisional Round playoff. Burrow’s message to the team was simple: If you want to be a winner, think, act and BELIEVE you are the best.

“I’m tired of the underdog narrative,” Burrow told us after Saturday’s surreal win at Nissan Stadium. “We’re a really, really good team. We’re here to make noise. Teams are going to have to pay attention to us. Like I said, we’re a really good team, with really good players and coaches. We’re coming for it all.”

After becoming the first quarterback in NFL history to win a playoff game after getting sacked nine times, Burrow showed one thing for sure: The Titans didn’t knock one ounce of confidence or determination out of him.

Burrow was at his very best when the Bengals needed him. When Eli Apple deflected a Ryan Tannehill pass at the Cincinnati 45 and Logan Wilson intercepted at the Bengals 47, there were 20 seconds separating the Bengals from overtime. Time for one perfect call and perfect pass.

Burrow found Ja’Marr Chase on a 19-yard out to the Tennessee 34. That was it. Two of Cincinnati’s most clutch players setting up it up for Money Mac. Ball game.

The Bengals haven’t had this since Boomer Esiason. And even Boomer didn’t have this level of success in his second year. What we’re witnessing is something few NFL teams get to enjoy. The Patriots of Tom Brady in 2001. The Steelers of Ben Roethlisberger in 2004. The Chiefs of Patrick Mahomes in 2018. Brady, Roethlisberger and Mahomes were all in their first full season as a starting quarterback. All three made the AFC Championship. Only Brady won the Super Bowl.

Burrow is acting like he’s ready to join them. If he does, he has an uncanny teammate to join him in McPherson.

“Man, that guy’s unbelievable,” Burrow said. “He was talking to Brandon (Allen) as he was going out to kick and he gave a little warmup (leg) swing and said, ‘Ahhh, looks like we’re going to the AFC Championship’ right before he went out there. We knew exactly what we had when he walked into the building in camp.

“And we saw how he carried himself. Everyone at this level can kick it through the uprights but it’s how you handle yourself in the locker room that shows us you have the confidence to go out there and make a kick like this and perform like he did in a game like this.”

McPherson not only kicks clutch field goals, but the ace rookie kicker also understands precisely what this Bengals team means to the people of Cincinnati.

“It’s really special. Our team is creating its own legacy. Obviously, I think this Bengals team will be remembered forever, just the excitement we’ve brought to the City of Cincinnati is awesome. The city’s on fire. It’ll probably burn down tonight. It’ll definitely burn down next week. We’ll have a whole city fly out to California, hopefully, and support us in the Super Bowl.”

Sure, there’s a little business of actually winning the AFC Championship on the road in either Kansas City or Buffalo but after what we all saw here in Nashville Saturday, who’s to doubt the Bengals now?

The Bengals quarterback was physically punished in a manner no quarterback has ever survived and won in an NFL playoff game. Burrow found himself on his backside nine times Saturday and could only direct one touchdown drive – to open the second half. But Burrow has won ugly games this season. He did it in Vegas. He did it in Denver. And now, given an opportunity against the top-seeded Titans with 20 seconds left in a tie game, he found Ja’Marr Chase on an out route to the sideline with 15 seconds left.

“I’m still dreaming right now, to be honest,” Joe Mixon said. “I’m still dreaming. I feel like I’m on the highest cloud you can ever imagine. I’m so blessed to be here, be a part of this something special. So thankful for my teammates. So thankful for the fans, for all the support. They came down here. Like I say, I’m on an all-time high right now. Words can’t even explain it.”

To D.J. Reader, the Bengals nose tackle, Saturday meant something altogether different. It meant the ability to stick it to those who have thought the Bengals were a nice little story that was going to fade into the Tennessee night and the Titans were going to host the AFC Championship next Sunday.

“It’s personal. Yeah. It matters to you all the time,” Reader said. “You’re a man, human — man, woman, anything. You want somebody to doubt you, your ability to do your job? As a journalist, you want somebody to doubt you to do your job? No, it’s disrespectful. You’ve got to go out there and take it. You got to earn respect, so we get it. We’ll keep chopping at the wood like we’ve been doing.”

And if the Bengals haven’t earned the respect by now, Reader knows a team sitting at home in Nashville that will be watching him, and the Bengals, fight for a chance to go to the Super Bowl in February.

And now, after shocking the No. 1 seed in their backyard, they can’t help but be respected by whoever draws them in the AFC Championship next Sunday.